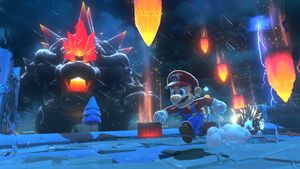 Super Mario 3D World + Bowser’s Fury hopped onto the Nintendo Switch Friday, bringing epic four-player tomfoolery to fans of the intrepid plumber. If you haven’t picked up a Switch yet, the company also released a special Mario Red and Blue Edition of its hugely popular hybrid console.

The game is an enhanced version of the excellent 2013 Wii U game, and CNET’s Scott Stein praised it as the Switch’s best Mario adventure since Odyssey. It was the first game to feature Mario and pals’ cat suits, and the new Bowser’s Fury section shifts to a more open-world Odyssey style compared to the linear levels of the main game.

The $300 special Switch matches the colors of the plumber’s iconic outfit: red Joy-Con controllers with blue straps, a blue Joy-Con grip, a red Nintendo Switch dock and a red Switch system. It’s the first time the console itself has been available in a different color, and it comes with a red and blue carry case and screen protector.

You’ll be getting the version of the console with the improved battery life, but it doesn’t include the game — you’ll need to pick that up separately if you’re eager for multiplayer Mario. Special-edition Switches also tend to sell out quickly.

Spotify will let employees work wherever they want, even after pandemic