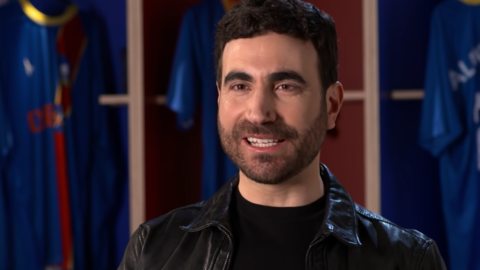 There is an ongoing fan theory that the Ted Lasso character Roy Kent is not a real person portrayed by Brett Goldstein but instead is a CGI character. This is obviously not true, but the internet being what it is, the theory has a lot of momentum and is generating many funny headlines.

Goldstein himself has now responded to the wackiness. In a post on Instagram, Goldstein started off by acknowledging that there is a “f**king load of mad sh** happening on the internet today, as usual.”

Goldstein presents the video to camera using his 3D Memoji character as a joke to play up the fact that he is indeed CGI and not a real human. It’s a pretty excellent joke and it’s sure to keep everyone talking about this, and Ted Lasso in general, which is the whole idea.

He goes on, in deadpan: “I just want to clear up something once and for all, I am a completely real normal human man who just happens to live in a VFX house and does normal human basic things like rending and buffering and transferring data. I don’t know what everyone’s f**king problem is.”

Am I Approaching My Female Coworkers the Wrong Way?