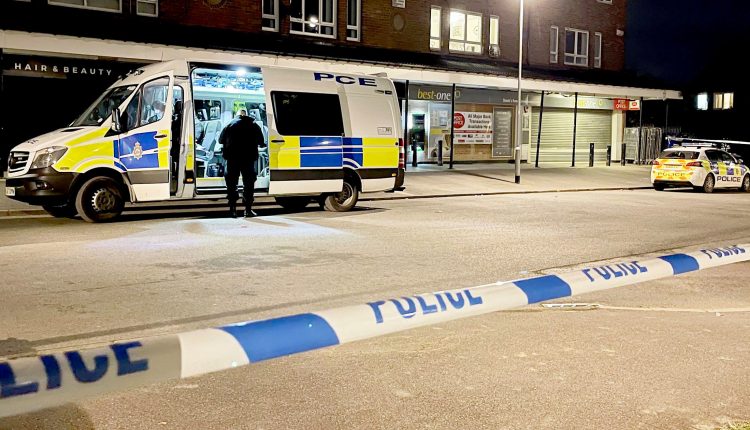 An attacker armed with a machete has chopped off a teenager’s hand in Leeds.

Witnesses told how neighbours put a belt around his arm as a makeshift tourniquet.

One man said: ‘He was obviously screaming in pain – which we all heard. I mean, the lad had his arm chopped off.’

The teen was attacked just before 9.30pm last night, with police called to Stanks Parade in Swarcliffe.

Paramedics also attended and took him for treatment. His condition is not life threatening.

One neighbour told Leeds Live: ‘We heard it from where we are round the corner – there was a load of shouting. When we came out, we could hear a lad writhing in pain.

‘His hand was on the road. I have never seen anything like it, it was like something off of a horror film. I hope he’s doing okay!’

A large crime scene remains in place around the area for forensic examination and specialist searches.

Detective Inspector Guy Shackleton said: ‘We are treating this incident very seriously and are carrying out a detailed and comprehensive investigation to establish the full circumstances and identify those responsible.

‘The victim has suffered an extremely serious injury and is currently receiving treatment in hospital.

‘We have already spoken to a number of witnesses but would still like to hear from anyone who saw any part of the incident or who has any information that could assist the investigation.

‘We would encourage anyone who does feel able to contact the police with information to make use of the anonymous service provided by the independent charity Crimestoppers.

‘We recognise that an incident such as this will cause understandable concern in the community and we are liaising closely with our colleagues on the local neighbourhood policing team who are updating their community representatives and maintaining a visible presence in the area to reassure people.’

Anyone with information is asked to contact Leeds District CID via 101 quoting crime reference 13210182460 or online.