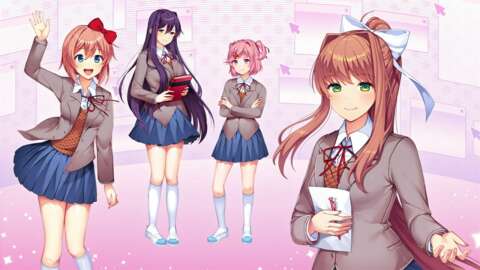 Author’s Note: To better explain my point, I talk about the story of Doki Doki Literature Club, so if you have yet to play it and don’t want to be spoiled, this is your warning to turn back. As an additional note: If you haven’t played Doki Doki Literature Club, please read the content warnings for the game. This game is great–easily one of my favorite horror games out there–but it goes to some dark places. Just know what you’re getting into beforehand.

Doki Doki Literature Club Plus is now out, enhancing the original psychological horror game with HD visuals and adding new story content and an image gallery. The release also marks the first time you can play the game on console, as DDLC Plus is available on Xbox, PlayStation, Switch, and PC.

That said, if you haven’t played DDLC yet, I advise you to play DDLC Plus on PC for the optimal experience. The story doesn’t change–you’ll experience the same haunting narrative, juxtaposed with friendly and colorful visual novel imagery, regardless of where you play–but a bit of the horror in the game’s twist is lost on consoles. The scares just work better on PC.

For those who have not played Doki Doki Literature Club and don’t care about spoilers, let me catch you up to speed. In DDLC, you play as a teenager who joins their high school literature club at the prompting of their childhood friend, Sayori. Alongside klutzy yet cheerful Sayori, the club is composed of cute yet tough Natsuki, quiet yet passionate Yuri, and always helpful president Monika.

Monika decides every member should compose poems to share with one another so the club can grow closer. If you use words and themes for your poems that appeal to Sayori, Natsuki, or Yuri, they’ll grow romantically attracted to you. As the days go on, Monika mentions that you never spend time with her and lets slip details that she, as a video game character, shouldn’t know–like how you can save your game to preserve your progress.

After some time, Monika begins messing with Doki Doki Literature Club’s code in order to make the other characters seem less appealing. Sayori’s depression suddenly becomes full-on suicidal thoughts, Yuri’s self-deprecating nature inexplicably transforms into an insatiable cutting fetish, and Natsuki’s aggressive deposition gives way to a standoffish, verbally abusive attitude. As the girl’s new personalities influence their coded goal as video game heroines that must love the player character, they begin to pursue your affections in increasingly violent ways, forcing Monika to delete them one by one so that the game can keep going. Eventually, it’s just you and her. She then admits that she knows your character isn’t real and begins talking to you, the player, and corrupting DDLC’s code so that you can no longer restart the game. It’s just you and her now, forever staring into each other’s eyes through the screen. Creepy.

That is until you go into the game’s code and–like Monika did to Sayori, Natsuki, and Yuri–you delete Monika.

When played out, this whole experience is incredibly unnerving. At first glance, Doki Doki Literature Club looks like your standard, cutesy rom-com visual novel. The game then slowly drip feeds you clues that something is up with your fellow club members and that Monika is responsible. But nothing quite prepares you for the reveal that Monika is fully sentient, knows your real name (or, at least, your username), and has somehow reached beyond the game to corrupt your hardware so that she, a lowly side character, can find some happiness and be with you, the person she loves.

It’s a horror that works because of its surprise. You don’t expect the game to break the fourth wall, and having it seem like Monika actually has control over the game makes her feel very much alive. It’s terrifying in the most awesome way–and it’s sold on the fact that you actually have to leave the game, open the “My Computer” folder on your desktop, go to the game’s files, scroll through until you get to the “Characters” folder, find Monika’s file, and find a way to delete it from your computer. It’s what you would do to kill an unresponsive program or app, but in the context of DDLC, you’re killing an artificial intelligence that’s holding you hostage.

Or at least, that’s how it feels on PC. Xbox, PlayStation, and Switch aren’t structured like computers. So to mirror the experience, the console versions of DDLC Plus play out on a fake PC desktop. When Monika takes over, you exit to this fake desktop, open “Files,” and then just go to Monika and delete her.

And DDLC loses a lot of its horror in this scenario. For one, it spoils a bit of its surprise right off the bat, hinting that you’ll need to use this fake PC desktop for something at some point. No such hint on PC–why would you question your own desktop that you see everyday?

But more importantly, this set-up removes the feeling that Monika is taking over your life. On PC, the need to leave the game and go into the computer or Steam’s files makes it seem like Monika is actively taking over your hardware and you have to fight her to stop her from escaping–an idea planted in your head when the game flashes a strange message partway through the story that one of the programs tried to escape, but failed. I never once felt fear playing DDLC Plus on Switch, as Monika was always confined to the game. She never did anything to change Nintendo’s hardware. So the entire time, she didn’t feel alive–she was just an interesting gimmick in a psychological horror game.

Doki Doki Literature Club’s horror is effective because the game is built to take advantage of how PC hardware and software works to really sell the haunting realization of its twist. It’s an incredibly clever segment of gameplay, and an important aspect to fully appreciating the psychological horror of its story. The console versions lose something because they don’t take advantage of how Xbox, PlayStation, or Switch hardware and software each uniquely work to break the fourth wall and bring the horror into the real world. These versions instead try to emulate the PC experience, which makes it feel fake and thus less scary. So even though Doki Doki Literature Club Plus is an effective horror game wherever you play it, the full impact of its psychological twist is lost on consoles. If you’re going to pick it up, grab it on PC.