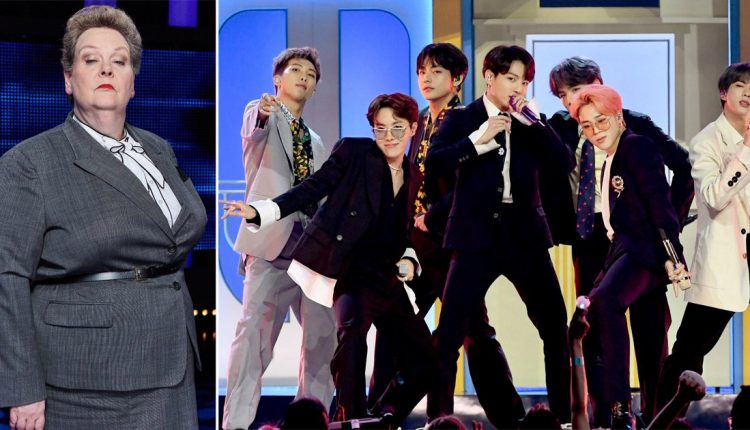 The Chase’s Anne Hegerty has come under fire from BTS fans after branding the group ‘a little Korean boy band that’s fundamentally not important’.

The quizzer enraged the Army with her remark which was in response to the backlash The Economist senior editor Anne McElvoy had received for writing: ‘Please no’ following the news the band had delivered a message of hope at the 75th UN General Assembly.

McElvoy later wrote: ‘My earlier tweet about BTS was in jest and I’m sorry it was taken the wrong way. Apologies.’

Weighing in on the frenzy, Anne then penned: ‘All this about a little Korean boy band that’s fundamentally not important?’

The BTS Army hit back at Anne’s tweet and flooded her reply in their droves.

‘”Little Korean boyband”? Excuse me? Some people are ALIVE because of those 7 boys,’ wrote one.

‘Those boys made a number of people happy and loved when no one else could. Those boys brought smiles on the faces of millions of people. Those boys gave people HOPE. They are more than just a ++’.

Echoing a similar sentiment, another added: ‘Just because you don’t understand something doesn’t mean that it’s not important to someone else…in this case, millions of people across generations, cultures and genders worldwide.

‘To dismiss them is to open yourself up to this type of scrutiny.’

Meanwhile, a third said: ‘@BTS_twt are not a little Korean boyband. They are world-renowned artists whose work brings comfort to many at a time of crisis when mental health issues are escalating.

‘Please do not dismiss what you do not understand and know nothing about.’

BTS consists of members Jin, Suga, J-Hope, RM, Jimin, V and Jungkook and has sold over 20 million albums on the Gaon Music Chart, making them the best-selling artist in South Korean history.

On Wednesday, BTS delivered a message of hope at the UN Assembly.

‘Let us reimagine our world,’ said BTS leader RM. ‘It might feel like it’s always night and we’ll always be alone, but the night is always darkest before the first light of dawn.’

Earlier this week, the band broke a new YouTube record with their Boys With Luv music video as it became the fastest video from a K-pop band to surpass 950 million views.

Weekend Hot Topic, part 1: Will you buy a PS5 or Xbox Series X/S?

You can now go on a trek with llamas in Surrey

Colonisation robbed me of my mother tongue – and my identity