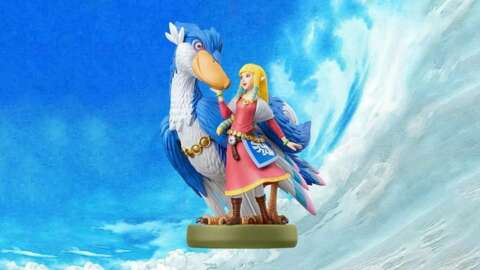 The Legend of Zelda: Skyward Sword HD’s Zelda and Loftwing Amiibo has been hit by shipping delays, causing the majority of them to arrive sometime in August instead of on July 16. As reported by IGN, the Amiibo has been impacted by “unforeseen” issues related to shipping, resulting in only a handful of the Zelda and Loftwing Amiibo arriving on July 16 when the game releases.

The majority of the Amiibo ordered will arrive sometime in August. Nintendo of America also told IGN that this delay will not impact any other Amiibo figures. The Amiibo was originally set to release alongside Skyward Sword HD, and while normally video game merchandise shipping later than the game isn’t a big deal, this Amiibo unlocks a pretty useful mechanic in-game.

“The Zelda and Loftwing Amiibo figure is currently impacted by unforeseen shipping delays. As a result, only a small portion of the Zelda and Loftwing Amiibo will be available on its scheduled July 16 launch date,” Nintendo of America said in a statement to GameSpot. “Additional shipments are delayed until August. We will ship additional Amiibo to retailers as soon as they arrive.”

The Zelda and Skyloft Amiibo allows you to travel between the air and the ground at any time during the game. Without this feature, you can only do this at a bird statue. Locking this feature behind a $25 statue was already an odd decision, but now that the Amiibo will likely show up after players have had the game for multiple weeks, there’s a decent chance some people will have beaten the game without ever getting to use the fast travel.

The Legend of Zelda: Skyward Sword HD releases for Nintendo Switch on July 16. In GameSpot’s review, critic Kevin Knezevic gave it a 7/10, writing, “Despite these flaws, Skyward Sword is also filled with many genuinely magical moments. The soundtrack, notable for being Zelda’s first fully orchestrated score, is still delightful, and the story is one of the most touching tales the series has ever woven, shedding light on the origins of Hyrule and other elements that have become hallmarks of the franchise. The game’s dungeons are a highlight, as well, filled with clever puzzles that test your observation and lateral thinking.”

The Legend of Zelda: Skyward Sword HD Joy-Cons also release on July 16 and there is still time to get an order in for the Blue Zelda-themed controllers.