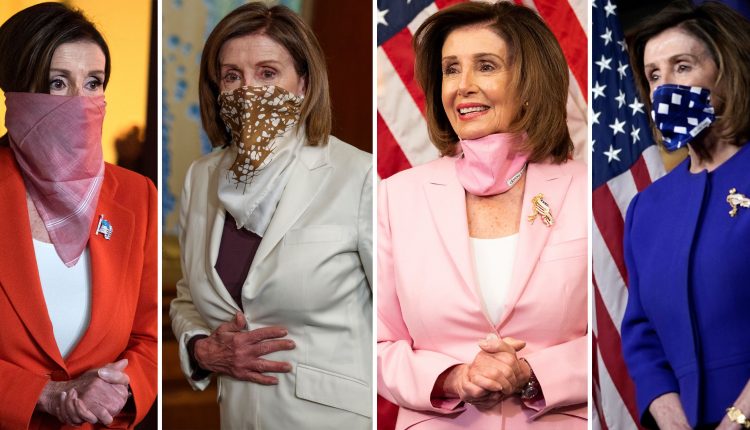 The speaker of the House has relentlessly, and strategically, made masks a part of her platform.

Late last week, as she was leading the charge to push the Democrats’ $3 trillion pandemic relief package through the House, Speaker Nancy Pelosi strode the floor of the Capitol in a fuchsia pantsuit, red pumps, white shell — and a coordinated red, white and green cherry-print face mask.

This was the day after Ms. Pelosi had stood at a podium for a news conference in a black dress with a complementary dark green and white foliage-print face mask — which was itself not long after she had appeared in a shell-pink pantsuit with a matching shell-pink mask.

Hillary Clinton took note, posting a photo on Instagram with the caption: “Leader of the House majority, and of mask-to-pantsuit color coordination.” The post has been liked more than 250,000 times.

Since late April, when she began wearing silk scarves that were color-coordinated with her suits and shells — orange and orange, blue and blue and cream and brown — and that she had worn bandanna-style around her face, Ms. Pelosi has also modeled a purple suit with a purple/blue, black and white geometric face mask and a white suit and blue shirt with the same.

And though it would be easy to categorize Ms. Pelosi’s masks as fun! and all about self-expression! and — yes — fashion!(as many style watchers have done), her track record and the way her approach contrasts with those around her suggest something more nuanced — through the stratagem is covered, natch, by the accessibility of patterned cloth, the kind we all have to wear and to which we can all relate.

Indeed, the sheer variety of her masks stands out like a beacon amid her sea of aides in generic white or blue medical masks and her dark-masked protective detail. It suggests a commitment to consciously choosing a mask every single day that, more than simply demonstrating good mask habits, civic awareness and solicitude for those around her, or even support for small businesses, demands attention. (Many of her masks come from Donna Lewis, a small store in Alexandria, Va., where she also buys some of her suits; for each mask sold, one is donated to Johns Hopkins hospitals.)

As the president continues to eschew the mask in his public appearances — over the weekend he went without one when meeting in the Rose Garden with Girl Scouts and small business leaders — Ms. Pelosi is making her mask-wearing, and the contrast with those around her, impossible to ignore. Doing so is a constant reminder of the difference between the heads of the executive and legislative branches.

Official Washington may have come relatively late to this particularly emotive symbol of the contemporary culture wars, but it has now fully arrived.

Ms. Pelosi is not the first government official to match her masks to her outfit. That honor goes to the Slovakian president, Zuzana Caputova, whose image went viral in late March at the swearing in of her new coalition government when she wore a burgundy face mask that coordinated perfectly with her burgundy sheath dress. And, apparently, she instructed her new cabinet to wear identical masks (blue) and gloves (white) for the group photo, hence both distinguishing herself from the group and creating a perfectly harmonious picture of civic care.

Melania Trump, too, matched her basic white face mask to her basic white shirt when she appeared in her PSA for mask-wearing in early April. As did Ivanka Trump, who wore a black mask with a black jumpsuit to tour a Maryland produce distributor last week (though that mask had the effect of making her look unsettlingly like a movie bank robber, despite the little American flag pin on the side).

And though most of Congress has now been converted to mask-wearing, as the recent Senate hearings on Covid-19 revealed, with Senator Richard Burr of North Carolina modeling a University of North Carolina booster mask and Senator Tim Kaine of Virginia, a red-and-black tie-dye bandanna. Still, they mostly seem to have resorted to the gimmick mask, the current equivalent of the gimmick tie (see also Senator Mitch McConnell of Kentucky and his Washington Nationals mask), the patriot mask (Senator Tim Scott of South Carolina in a stars and stripes and eagles number) or the OK-I’ll-wear-it-if-I-have-to face mask that Vice President Mike Pence wore when he visited the General Motors and Ventec ventilator production plant in Indiana last month.

But no other elected official has embraced the mask with as much relentless and considered eye-catching range as Ms. Pelosi.

In this her resolve is fully in line with the Speaker’s approach to image-making, which has always involved every tool at her disposal, be it a clap back at the State of the Union or her Speaker’s mace pin. She understands that there are ways to make herself and her positions heard even when she isn’t saying anything at all. That at a time when almost all communication is taking place within the confines of a small box, these kinds of details matter.

And thus, Nancy Pelosi, master of the statement coat, canny strategist of the suffragist pantsuit, has also become the leader of the masked opposition.

Adapted from NYTimes By Vanessa Friedman

Azarenka and Sabalenka set for all-Belarusian final in Prague

Leading the #MeToo movement in Congress