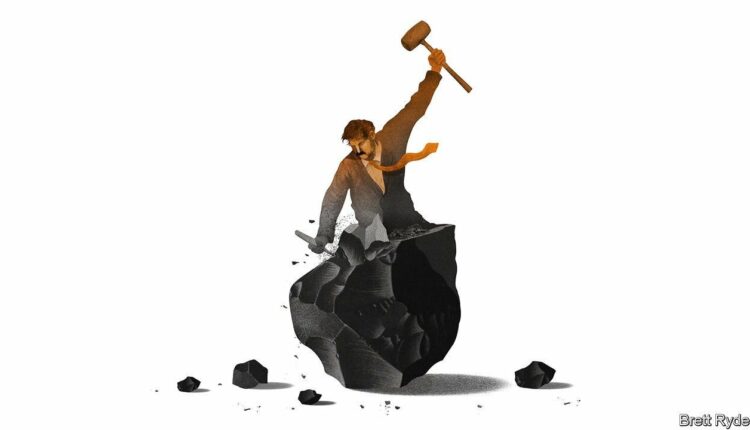 ONCE UPON a time, long before the hoodie was invented, pioneers of business preferred to call themselves self-made men rather than entrepreneurs. They built hard assets like ports, railways and oil terminals. They cajoled—and canoodled with—governments. They built vast conglomerates. In America, such men made history in the Gilded Age. In India, one of their modern-day avatars is Gautam Adani, a trader who started his career haggling for diamonds, and now controls more ports, power stations, solar farms and airports than almost any other private tycoon. A thickset 59-year-old of few words, a strong political antenna and a stomach for debt, he could not be further removed from the elfin founder-CEOs of the digital age. And yet as recently as June, the value of his companies had more than quintupled in 12 months, to $133bn. That is tech-like growth from what is normally one of the stodgiest parts of the old economy—infrastructure.

In India’s “Billionaire Raj”, Mr Adani is usually overshadowed by the other “A”, Mukesh Ambani, India’s richest man, who controls Reliance Industries, a petrochemicals-to-phones conglomerate. Yet Mr Adani, whose personal net worth almost caught up with Mr Ambani’s in June, is just as intriguing—not least for some of the contradictions he embodies. In a country whose banks have lost fortunes lending to infrastructure projects, his debt-fuelled acquisition spree has gone from strength to strength. He is a champion of Prime Minister Narendra Modi’s drive for self-reliance, yet relatively few of his firms’ shares are owned by Indian institutional investors. And he courts environmental, social and governance (ESG) funds from around the world, yet parts of his empire are knee-deep in coal. Anyone who can sustain such a precarious juggling act probably deserves to make history, too.

The Adani Group’s interests have dovetailed with the economic ambitions of Mr Modi’s government. For instance, since listing in 2018, the share price of Adani Green Energy (AGEL), its renewables company, has soared by over 2,700%. As well as building what it reckons is the world’s biggest solar-power company, it is helping Mr Modi achieve his clean-energy ambitions. And Mr Adani is not afraid of bold bets to win government contracts. Take Adani Enterprises (AEL), another listed entity, for instance. In 2018-19 it scooped up six privatised Indian airports, despite no previous experience in the industry. Since then (and despite the blight on air travel caused by the covid-19 pandemic) its stockmarket value has eclipsed that of Adani Ports, historically the group’s crown jewel.

This expansion is not as reckless as it seems. Adani Group touts an “adjacency model” in which it moves into complementary areas: from ports to power to logistics to data storage, for example. Its debts are backed by rising cashflows. It has stepped up reliance on bond markets, rather than India’s ropy banks. And it has brought foreign groups, such as TotalEnergies, the French supermajor, and Qatar’s sovereign-wealth fund, into joint ventures. The government, not overly keen on foreign competition in India, welcomes these sorts of capital inflows as much as Mr Adani does.

Its financing creates a paradox, though. While the group attracts foreign funding for businesses that are focused squarely on India, ordinary Indian investors barely get a look-in. Besides the flagship ports business, domestic mutual funds hold minuscule amounts of its other listed entities, including those whose share prices have shot up of late, such as AGEL and AEL. The group says such shareholdings should widen “in the near future”, explaining that the small free floats are a result of relatively recent listings.

But in the meantime, questions about the group’s arcane shareholding structure have helped wipe tens of billions of dollars off the combined value of its six listed entities since mid-June. Besides Mr Adani, who has huge stakes in all his listed companies, most of the remaining large investors are offshore funds, including some based in Mauritius. Some have almost all of their investments in Adani Group companies, and questions about their ownership have been raised in parliament. In response, a government minister said last month that the Securities and Exchange Board of India, the capital-markets regulator, was investigating some of the group’s companies. Adani Group said it had always been transparent with its regulators, and had received no information requests recently.

The group’s hunger for capital creates a further conundrum. Increasingly it is peddling its clean-energy businesses to ESG fund managers. Yet AEL owns Carmichael, an Australian thermal-coal mine that has been the target of a grassroots “Stop Adani” campaign, and has been shunned by banks and insurers worried about the climate implications of funding coal projects. Tim Buckley of the Institute for Energy Economics and Financial Analysis, a pro-renewables think-tank, reckons that the coal exposure could cause an ESG backlash hurting other parts of the Adani empire. He argues that to bolster its ESG reputation, the conglomerate should commit to phasing out coal power.

Mr Adani appears to have no plans for that yet. He believes a developing country like India cannot give up coal overnight. The group still intends to produce 30% of the gross operating profit of its utility businesses from thermal power generation in 2025 (it was 52% last year). When Carmichael produced its first lump of coal in time for Mr Adani’s birthday on June 24th, he tweeted: “There couldn’t be a better birthday gift.”

Perhaps he recognises that foreigners, sustainable pretensions notwithstanding, find India irresistible, especially with investment in China in the doldrums. Perhaps he hopes that they will flock to giants like Adani, not least because of its knack for coping with India’s bureaucracy. Yet if they do, the group faces a problem. The stronger it becomes, the more unsavoury it will seem that few ordinary Indian shareholders are sharing in the upside. ■