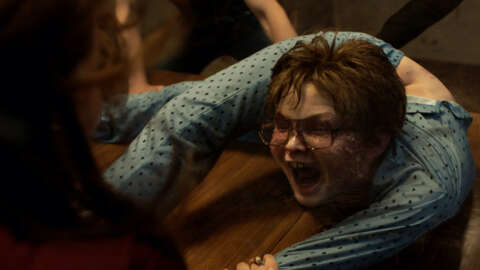 The Other Real Life Event That Inspired The Conjuring 3

While may be extremely loose at best, it does pull elements of another very real phenomena that swept through pop culture in the 1980s. The Satanic Panic, as it came to be known, described a specific type of moral outrage that was stoked by everything from fundamentalist groups to concerned parents well into the early ’90s. In fact, it even persists in some ways today, though the form it takes has changed overtime.

The following contains spoilers for The Conjuring: The Devil made Me Do It, so please proceed with caution.

When things really begin to diverge from the source material in The Conjuring 3, we learn that Warrens have identified a curse placed on the Glatzel family, left by a Satan-worshiping witch. Said curse invited the demon into their home that attacked Julian and then wound up possessing Arne, which lead him to commit the murder the story revolves around. Naturally, none of this happened in the real case–there was no heretical totem hidden in the house’s crawlspace, no string of related ritual murders, and of course, no villainous witch for Lorraine to fight with psychic powers.

What did exist at the time, however, was a pervasive and all consuming fear of all those things. The Satanic Panic was “officially” kick started in North America with the publication of a called Michelle Remembers, which presented a falsified case of a woman named Michelle recounting her experience being ritually abused by Satanists. The story was written by a Canadian psychiatrist named Lawrence Pazder and his wife, Michelle Smith, who claimed they got the details from Michelle by using recovered-memory therapy. The success and outlandish claims of the book made it wildly successful, to the point that Pazder even began giving lectures and training to police in order to identify and stop “SRA,” or Satanic ritual abuse.

The sudden rise in awareness of SRA resulted in a wave of reports of suspected child abuse at places like preschools and daycares, all of which were suddenly suspected of being run by Satanists. These allegations were frequently taken to court–some cases, like the now-infamous –drug on for years, but ultimately resulted in no convictions being made and no evidence of any ritualistic behavior taking place, Satanic or otherwise.

The hysteria soon spilled out away from places like schools and preschools and SRA activity was soon suspected in cases of animal abuse and mutilation. This idea soon snowballed into a fear that any fantasy stories or games, specifically newly introduced pastimes like Dungeons and Dragons, which often included fighting with or against monstrous animals, were inspiring anyone who played them to take part in SRA. In 1985, things had gotten so out of hand that a concerned parents group called B.A.D.D, Bothered About Dungeons and Dragons, was formed in response.

Practices of Christian “psychotherapy,” literal exorcisms, and “anti-Satanic warriors” running support groups for people who believed they were potential victims of SRA began to crop up all around the country. Conspiracy theories about world-wide networks of Satanic cults organizing secret trafficking networks to torture, mind control, and abuse children–even turn them into Satanic sleeper agents who could be activated by code words–began to filter into the mainstream.

It wasn’t until the late ’80s, after several highly publicized trials began to peter out with lack of evidence and no convictions, that the public and media perception of the Satanic Panic began to turn from fear to skepticism. Ultimately, in a , it was found that of the 12,000 reports of SRA made during the height of the hysteria, absolutely no evidence was turned up pointing towards Satanic cults or ritualistic abuse.

Of course, in the fictional world of The Conjuring, however, things aren’t so easily debunked. In The Devil Made Me Do It, we see an alternate universe where not only is the Glatzel family case literally rooted in actual demons, it is also a literal and very real case of SRA. There may not be a legit cult involved–it’s just one, very determined Satanist witch–but the end result is the same. She’s aiming to hurt a kid, summon a demon, and gain more power, the fact that the kid was exorcised and the demon wound up hopping to another person is where the drama really starts to unfold.

It really makes you wonder what the rest of the world looked like at the time in this alternate reality–and what sort of nefarious magic groups like B.A.D.D. would actually begin to uncover if given the chance.

The Conjuring: The Devil Made Me Do It is currently streaming on HBO Max and in theaters in select cities.

All The Xbox Games Confirmed For E3 2021