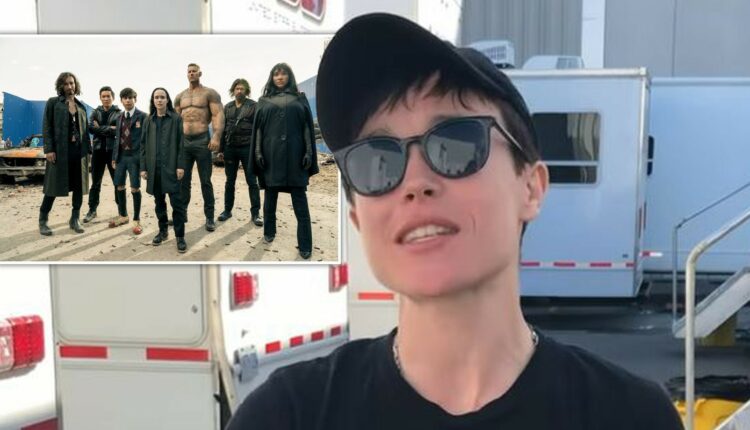 The Umbrella Academy season 3 wraps filming as cast celebrate milestone: ‘I don’t think the world’s ready for this’

The Umbrella Academy has officially wrapped filming for season 3, with members of the cast including Elliot Page and Robert Sheehan marking the occasion with a celebratory video on set.

In the season 2 finale of the hit Netflix series, the Hargreeves siblings return to their home in the year 2019, only to discover that their reality has been drastically altered.

Not only is their adopted father Sir Reginald Hargreeves (Colm Feore) still alive, but he has formed a different group of superpowered individuals called the Sparrow Academy, which includes their brother Ben (Justin H Min), who in their reality died when he was a teenager.

Excitement is rife among fans as they’re left to wonder whether the Umbrella Academy and the Sparrow Academy go head-to-head in the third season.

While the launch date for season three hasn’t been announced, the release of a video revealing that filming has been completed could indicate that viewers are looking at a 2022 release.

Steve Blackman, showrunner for The Umbrella Academy, shared a video on Instagram of the main members of the cast announcing that production has come to an end.

‘That’s a wrap of season three of Umbrella Academy and I’m stoked ‘cause I can’t wait for you to see it and sad ‘cause I’ll miss everyone,’ Elliot, who plays Vanya in the show, says in the video while wearing a black T-shirt paying homage to The Matrix creators The Wachowski sisters.

‘Ladies and gentlemen, that is a wrap on season three of Umbrella Academy,’ says Tom Hopper, who plays the super strong Luther, aka Number One.

Diego actor David Castañeda jokes that they have a two-for-one special on the hot dogs at a corner stand in Los Angeles, before adding: ‘Season three. We’re wrapped.’

Robert, whose character Klaus has the ability to communicate with the dead, excitedly says: ‘That, ladies and gentlemen, is a wrap on season three, Umbrella Academy. Yeah!’

Aidan Gallagher, who plays the time-travelling Five, and Emmy Raver-Lampman, whose character Allison has powerful powers of persuasion, also celebrate the news, as Emmy cryptically says: ‘Wow. I don’t think the world’s ready for this. I think it’s our best season yet.’

Justin, whose role in season three is shrouded in mystery as a member of the Sparrow Academy, tells fans to ‘get excited’ for the new episodes, while Colm appears in the video dressed in his Reginald costume, complete with a smart suit and his signature monocle.

Ritu Arya, who made her debut as Lila Pitts in season two, is the last star to feature in the clip, before a logo for The Umbrella Academy season three appears on screen.

Just as Elliot hoped they would be, fans were indeed stoked over this latest update.

‘Omggg I can’t breathe,’ one fan said in response.

‘Congrats! Can’t wait to see what you all have worked on! We the fans are so excited!’ another commented.

The Umbrella Academy is based on the comic book series of the same name by My Chemical Romance lead vocalist Gerard Way.

The superpowered Hargreeves siblings were all adopted by Reginald after being born on the same day across the world.

Years later, they reunite following their father’s death, where they learn they need to work together to prevent an impending apocalypse.

The Umbrella Academy is available to watch on Netflix.