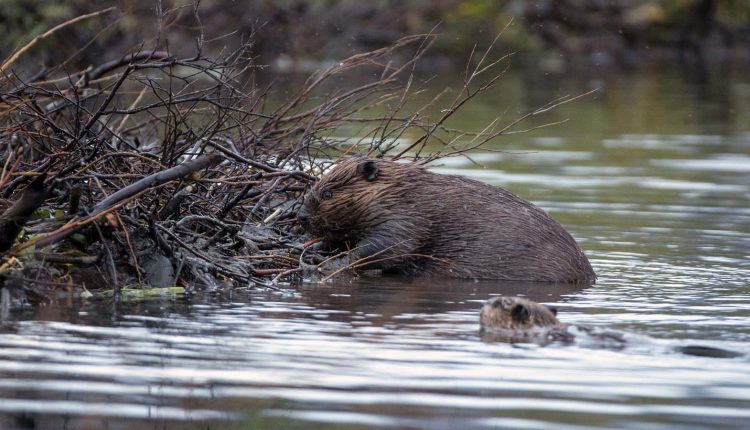 The Unusual Connection Between Beavers, Permafrost and Climate Change

Blame it on the beavers: The industrious, buck-toothed rodents are inadvertently contributing to climate change.

As temperatures warm and boreal beavers migrate north, they’re creating ponds — more than 10,000 of them — that are flooding millennia-old permafrost. When thawed, permafrost can release dangerous greenhouse gasses such as carbon and methane.

University of Alaska Fairbanks researcher Ken Tape says the beavers are, in effect, creating dangerous oases around the Arctic. He’s one of the authors of a June 2020 study on beavers and permafrost published in the journal Environmental Research Letters.

Northern tundras are traditionally too cold for trees or vegetation, which beavers need to build their dams. Over the last 20 to 50 years, satellite imagery has shown beavers moving from the boreal forest to build ponds in the Arctic tundra, Tape says.

“Up until recently, we haven’t had beavers in the Arctic tundra,” he says.

Thanks to climate change warming the region, beavers can now access the supplies they need to eat and build in the tundra. Beavers build ponds along creeks and streams to escape from predators and transport wood to build their dams, he says.

The influx of beavers building ponds is starting to thaw the permafrost — land that’s been frozen for at least two years but often hundreds or thousands of years — under the ground.

Using their famous teeth, beavers are chewing down shrubs as well as using moss, sedges and mud to build dams and form ponds in the tundra.

Beavers are known to completely alter landscapes and create miniature wetlands, he says. Scientists observed the number of beaver dams increased from two to 98 from 2002 to 2019 — five new dams per year.

“Evolution has taught beavers to be almost perfect hydrologic engineers,” Tape says. “They know where to put their dams. They are very efficient, and they’re incredibly industrious.”

These furry engineers swim back and forth all night to work on their dams, as people who have camped near beaver lodges or ponds know, Tape says. When beavers decide to build a pond in a place where humans don’t want them, he says it’s an “uphill battle” to work against them.

Permafrost makes the beavers moving up into the tundra a global concern. When beavers flood the tundra to make ponds, the water transfers heat to the ground and starts thawing the permafrost, releasing the greenhouse gases stored inside, he says.

“[Beavers are] really creating these focal points or oases on the landscape for boreal species to gain a foothold in the Arctic,” Tape says.

Scientists are still figuring out how many ponds beavers are building and where they’re located, he says. With the number of ponds in Alaska growing every year, similar trends are popping up in Canada and in Eurasia, he says.

Researchers need to find out how quickly beavers are “colonizing the tundra” and what impacts could unfold in the coming decades, he says.

Climate change is melting ice and making shrubs grow taller in the tundra, but there’s also another factor at play: Beavers are still rebounding from overtrapping during the 19th and early 20th centuries that depleted the species’ population.

“I don’t think anyone wants to go out and shoot and trap a bunch of beavers. And I don’t see fur coming back into vogue anytime soon,” Tape says. “So what to do going forward, I think it is a difficult question.”

Many animals are responding to climate change by moving further north, he says, but beavers are unique because their behavior impacts the landscape — much like humans. For Tape, that’s what makes beavers exciting yet scary creatures to study.

The issue of thawing permafrost is a serious one, he says, though this wouldn’t be so pertinent if beavers were only building dozens of ponds rather than thousands.

“When you start to extrapolate that to a global scale, you’re really looking at potentially hundreds of thousands of beaver ponds that have been these oases that have been added to the landscape,” he says. “And so I think it’s pretty important now and could be very important going forward.”

But don’t turn on beavers just yet — National Geographic reports they’ve also been climate change fighters in other areas of the world.

This story originally appeared in Wbur.org and is republished here as part of Covering Climate Now, a global journalism collaboration strengthening coverage of the climate story.

How to Make 3D Printing Better

Why the 2020 Fire Season Has Been So Hellish

Why Solar Geoengineering Should be Part of the Climate…