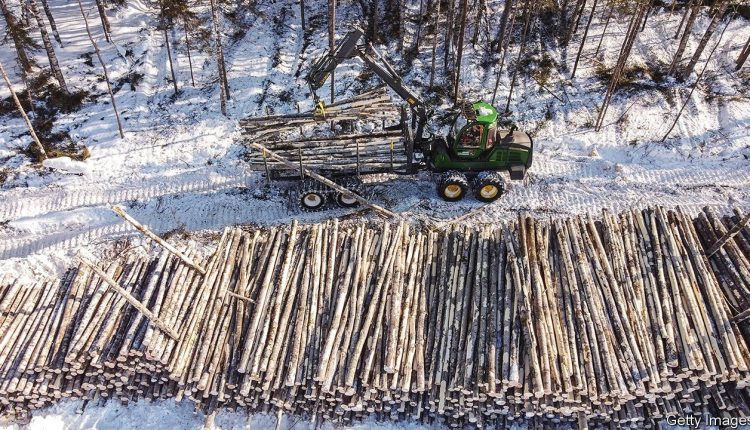 IN THE BUCOLIC low-rise surroundings of Norway’s biggest lake, Mjostarnet stands out. At 85 metres tall, this building of flats, offices and a hotel, completed in 2019, is Norway’s third-tallest. It is the highest in the world built of wood. Similar structures have sprung up in other countries. So, in many more places, have wooden additions to existing buildings, which weigh around a fifth of what an equivalent steel-and-concrete one would, and therefore risk less damage to the building below.

Mjostarnet stands as a proud example of wood’s comeback after a century of steel, concrete and plastic. Global exports of forest products, including sawn wood, pulp and paper, grew by 68% between 2000 and 2019, to $244bn. Demand is reaching redwood-like heights, fertilised by a pandemic DIY boom. Having ranged between $200 and $400 for much of the past decade, the price of 1,000 square feet of one-inch-thick timber has exceeded $1,400—and hoisted the share prices of wood producers up with it. The stockmarket value of many big ones such as Weyerhaeuser has roughly doubled in the past year; the American giant is now worth $30bn.

Mark Wilde of the Bank of Montreal expects more saw mills to come online in response. They will be different to those of the past, for the industry is also undergoing root-and-branch changes.

The first is the collapse in demand for commercial printing over the past 15-20 years. This has led to consolidation in paper production. Many paper mills have been converted to manufacture packaging, preferred by consumers who worry about plastic’s environmental impact. Some big European wood firms, such as Metsa of Finland, have abandoned print paper (it still makes cardboard and tissues). After shutting two mills this year, Stora Enso, which is also Finnish, will derive 10% of revenue from print paper, down from 70% a decade ago. The rest will come mainly from pulp, packaging and fibre products.

The second, related change is technology-enabled diversification. Most mills already manufacture wood products on top of selling lumber. In modern ones, saws slice three-quarters of a tree into planks, and chop the rest into chips that can be turned into wood-based composites. Because the forest business reflects the decades-long sylvan lifecycle, this 40-year-old “chip-n-saw” technique is only now enjoying widespread adoption. It works best on trees with a diameter of 25cm, compared with 40cm for traditional bandsaws, and so lets forest owners sell or, if they are vertically integrated with mills, use their trees 20-30 years earlier than in the past.

Greater harvesting efficiency is now combining with newer techniques to expand the range of wood products. Metsa is turning waste lignin, a natural polymer which gives trees their rigidity, into textiles for clothing and furnishings. UPM, another Finnish company, has worked out how to turn “black liquor”, a gloop left over from paper manufacturing, into biofuels and other chemicals. It will open a refinery in Germany—the first of its kind anywhere—next year. It is already making wound dressings and a cell-culture medium from wood nanofibres to rival agar jelly. There is talk of climbing higher up the value chain to planning and design. All this will prove a handy scaffold when lumber prices come back down to earth. ■