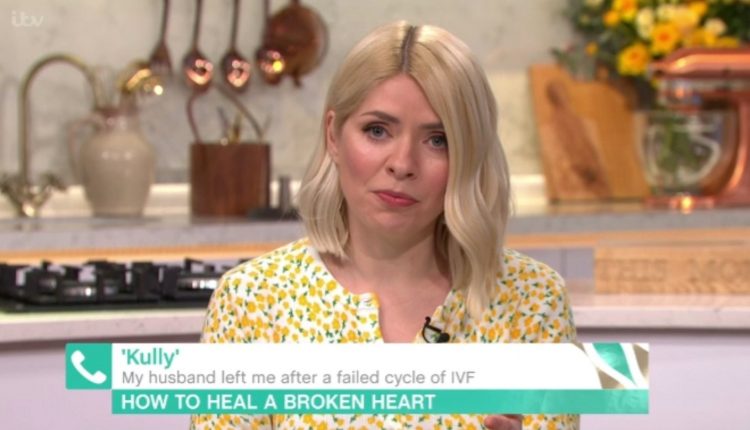 This Morning viewers rally around caller whose husband left her after failed IVF treatment: ‘You can do better than him!’

This Morning viewers have rallied round a caller whose husband left her after a failed attempt at IVF treatment.

In a special phone-in dedicated to those who have had their hearts broken in lockdown, Holly Willoughby and Phillip Schofield were moved by a 32-year-old woman who had been struggling to conceive.

Known as ‘Kully’, the caller from Leicester started weeping as she explained: ‘I had a failed cycle of IVF in December. It was all just a couple of weeks and then he’d gone.

‘I’d like to say I didn’t see it coming, but I think it did. I have been going through fertility treatment for seven years prior to that.

‘I’m only 32, we have seven embryos left in the freezer, and he has just gone and I don’t know where my life is going.

‘I haven’t been given a reason or a definitive explanation as to why this is happening to me.’

She continued: ‘All I’ve got out of him of any substance is “you can carry on doing the IVF.”

‘Why am I good enough to carry his child, but I’m not good enough for him to be with me?’

Kully was comforted by Holly and Phil as well as Rosie Green, who offered her advice after writing the book How to Mend a Broken Heart.

Soon viewers were giving their support too, branding the husband a ‘s**t’ for ditching his wife when she needed him most.

‘Kully your ex husband is a total b*****d. Leaving her because of a failed IVF cycle is a s***y thing to do,’ one wrote.

‘Kully your husband is an a**ehole.. walking out on you after failed IVF? You can do better, f**k him,’ said another furious viewer.

‘I really hope someone who knows Kully reaches out to her and she get receives some support away from a call in on [This Morning],’ said a third.

‘Absolutely devastating for her. Fertility is hard enough without what’s she’s been through, god that broke my heart!’

‘Oh Kully, sending you so much love,’ a fourth viewer told her. ‘I can hear the heartbreak in your voice.’

Following the call, Phillip told Kully that the team were available to speak to her away from air, wishing her well as she tried to move on.

This Morning airs weekdays from 10am on ITV.

If you’ve got a celebrity story, video or pictures get in touch with the Metro.co.uk entertainment team by emailing us [email protected] calling 020 3615 2145 or by visiting our Submit Stuff page – we’d love to hear from you.

Northern Ireland riots must stop before someone killed: Ireland’s Coveney