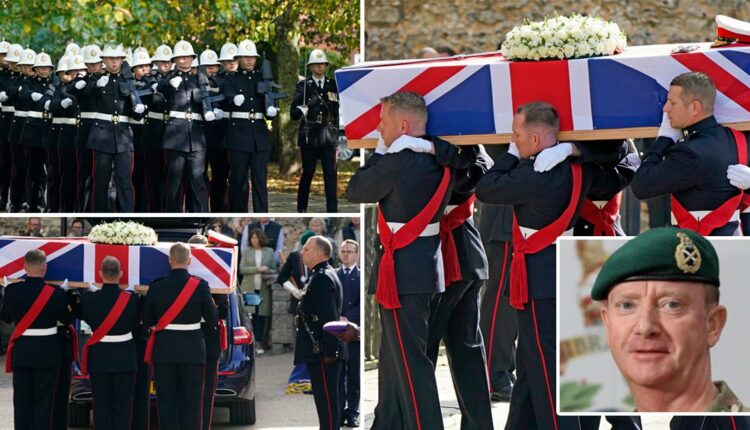 The death of the former head of the Royal Marines is ‘driving a wedge’ between the institution and its fighting troops.

Major General Matthew Holmes was found hanged at his home six months after losing his senior Navy post in a restructure.

An inquest opening heard he had ‘concerns’ about his career and marriage at the time of his death on October 2.

The serious impact the news has had on troop morale was laid bare in a leaked letter on the same day his funeral was held at Winchester Cathedral.

His death has damaged cohesion within the navy, according to the man who succeeded him as Commandant General Royal Marines (CGRM) in 2019, Lieutenant General Rob Magowan.

In a letter to other Navy staff, he said Maj Gen Holmes was in a ‘bad place’ following the loss of his ‘dream job’.

Referring to the colours of the shirts worn by the Navy and the Marines, Lt Gen Magowan said: ‘The ‘dispute’ is serving to drive a wedge between white shirts and lovat, which helps nobody.

‘It is making my job harder as CGRM. I’ll manage that but it is also impacting the serving Corps, just as we mature an integrated relationship across the Navy in pursuit of the Future Commando Force.’

He added: ‘The focus this coming week is to celebrate Matt’s amazing career, and to support his family.

‘Anything else is a straight distraction. So I am asking all of us to work together, for Matt, his family and the Corps.’

A naval source told the PA news agency: ‘The CGRM wrote to say that changes were made for the greater good of the naval service and we must all get behind them to ensure the naval service continues to provide a fantastic service to the country.’

A Royal Navy spokesperson said the service would not comment on the letter and said it was focusing on providing support to Maj Gen Holmes’ family at the time of his funeral.

The funeral for the 54-year-old was attended by 600 people, including senior naval officers and his widow Lea.

In a statement released after his death, she said: ‘He was exceptionally proud to have served as Commandant General. His entire family and I have felt very privileged to play our part in supporting Matt and the Corps family throughout his career.

‘Matt took the immense responsibility for the lives of those he served alongside very seriously; not a day would go by without him thinking of the men under his command who were lost or injured; and of course, their families.’

The inquest, which also heard that police were called to the family home before Maj Gen Holmes’ death, was adjourned for a full hearing on February 10, 2022.