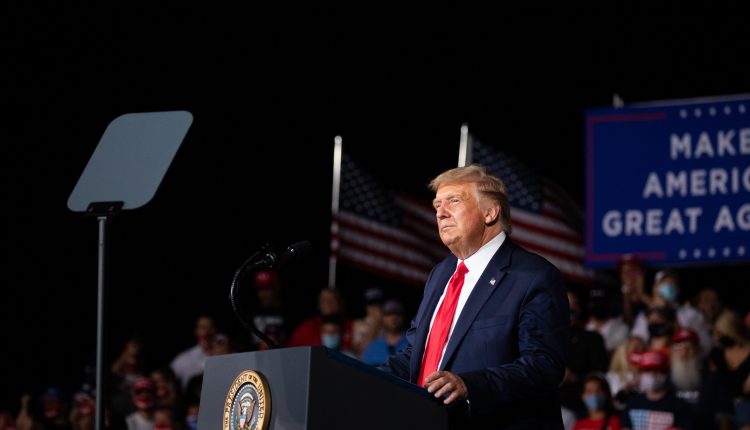 In the early months of the coronavirus pandemic, President Trump knew COVID-19 was deadly and the virus was highly contagious and airborne—yet said he decided to “play it down” publicly, according to excerpts and recordings from Bob Woodward’s new book Rage.

The president knew that the coronavirus was deadly as early as February and in March admitted to downplaying the risks of the illness, according to a series of recordings obtained by the Washington Post and CNN between Trump and Woodward, who cowrote All the President’s Men in 1974.

Instead of being up-front about the risks associated with COVID-19 over the next several months, Trump repeatedly said that the coronavirus would simply “go away” as the seasonal temperature changed or as Americans built up a herd immunity, as Rolling Stone reports. And just days after declaring a national emergency on March 13, he told Woodward that he “wanted to always play it down…. I still like playing it down, because I don’t want to create a panic.”

Even in early February, Trump knew details about the virus that could make it extremely contagious under certain circumstances. Woodward spoke to the president on February 7, when Trump explained that he had spoken to Chinese president Xi Jinping the night before about the coronavirus.

“We’ve got a little bit of an interesting setback with the virus going in China,” Trump said, according to Woodward. “It goes through the air…. That’s always tougher than the touch. You don’t have to touch things. Right? But the air, you just breathe the air and that’s how it’s passed. And so that’s a very tricky one. That’s a very delicate one. It’s also more deadly than even your strenuous flus.”

The U.S. response to COVID-19 has been messy from the very beginning, with setbacks in testing and delayed recommendations on social distancing and masks. If, rather than play down the dangers of the disease, the government had come out with a clear message and plan for preventing the spread of the coronavirus, we might be in a very different situation today.

Experts now agree that the coronavirus mainly spreads through respiratory droplets, which are expelled when an infected person coughs, sneezes, talks, or yells, SELF explained previously. Those droplets, which may contain the virus, can then land in someone else’s mouth, nose, or eyes and possibly infect them.

In some circumstances, viral particles can also be present in an aerosolized mist that may linger in the air for a short period of time, which is colloquially referred to as airborne transmission. Transmission via aerosol is most likely to occur between people who are in close contact in an enclosed space for an extended period of time, SELF reported previously. It can also happen during certain medical procedures, like when a medical practitioner intubates someone with COVID-19.

Knowing all of that, it’s clear that social distancing, wearing masks (especially in public areas where social distancing is difficult to maintain), frequent handwashing, widespread testing, and contact tracing—while vaccine development is underway—are key to preventing the spread of COVID-19. And it sure would have been great to have a concerted effort from the government to make sure people knew how important those measures were and are, as well as federal support to make stay-at-home orders feasible for more people in the long-term.

Instead, as we now head into flu season, Johns Hopkins University researchers estimate that there have been 190,000 deaths involving COVID-19 in the U.S. so far. Meanwhile, President Trump has spent the last few weeks posting dangerously incorrect COVID-19 information on Facebook and pushing wildly inaccurate interpretations of COVID-19 death data on Twitter.

How Do You Prove Alcoholism in Custody Cases?

The Black Friday movement to shop Black-owned businesses as…