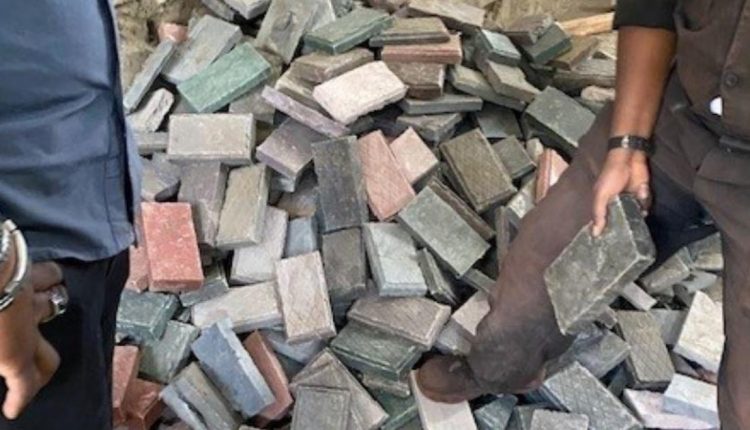 For the latest report in our “Eye on Earth” series, CBS News correspondent Debora Patta went to Kenya to learn about a creative approach to addressing the scourge of plastic pollution.

Nairobi — Floating in the middle of world’s largest ocean, the Great Pacific Garbage Patch is a man-made mess of plastic waste covering twice as much area as the state of Texas. Kenya is one of many countries contributing to the pollution.

Hundreds of tons of plastic waste are created every day in the capital, Nairobi, alone. On the outskirts of the sprawling city festers the Dandora dump — about 30 acres, or 22 football fields, of waste. Despite a pioneering ban on single-use plastics in 2017, Kenya is still drowning it.

A woman who works selling roasted corn for lunch to people who scavenge garbage for a living walks down a path between hills of garbage at the dump in Dandora, on the outskirts of Nairobi, Kenya, in a December 2018 file photo.

But while most people look at Dandora and see an insurmountable plastic mountain, Patta met a young woman who’s finding innovative ways to tackle the problem, and to move that mountain.

There are days in Kenya when you can actually walk on water. Patta saw one river so choked with plastic that it has formed an unsinkable foundation. It’s a disturbing health hazard for everyone living there, but not for Nzambi Matee.

“I get excited when I see waste,” the materials scientist told Patta, “because I know that’s life for us.”

The fact that plastic does not sink is precisely what intrigued Matee.

A river in Nairobi, Kenya, clogged with plastic and other garbage.

“I came across this concept of using plastic to [make] building blocks,” she explained.

Tons of plastic clogs drains, pollutes rivers and contaminates animal feed in the region, and some of it ends up at the Dandora landfill. The site reached its capacity and was supposed to have been shut down 20 years ago.

But every day, waste pickers trudge through the rancid trash sifting for plastic. It wasn’t easy for Matee to figure out whether she really could turn the waste material into useable building bricks.

When it finally worked, “that was the best day ever,” she told Patta. “It took us about nine months just to make one brick.”

One brick wasn’t enough, but that was no problem for a woman who likes to get her hands dirty. Next, she built a machine to mass produce the plastic bricks.

Materials scientist Nzambi Matee holds one of the bricks she’s made of plastic from waste gathered at a landfill in Nairobi, Kenya.

First the waste is sorted to remove rubble and metal, and then the plastic is baked — just like “making cookies,” joked Matee — before the boiling mixture is molded into building blocks. Her setup can churn out as many as 2,000 per day, and they’re 35% cheaper than standard bricks, and up to seven-times stronger.

Right now, Matee’s bricks are only being used for pathways in small households, but she wants to target big construction companies.

Kenya’s fight against plastic pollution isn’t just a homegrown issue. It’s complicated by the fact that, two years ago, the U.S. exported more than one billion pounds of plastic waste to 96 nations, including Kenya. Now Washington wants to make the shipment of more plastic waste a condition of a proposed trade deal.

“It would be importing more problems if we were to allow this U.S.-Kenya trade deal to be used as a way of dumping plastic waste on the African continent,” he told CBS News.

Single-use plastics cause concern amid virus

Matee agrees that countries should keep their waste in their own backyards, and she intends to make good on what she calls her triple threat:

“The more we recycle the plastic, the more we produce affordable housing… the more we created more employment for the youth,” she said.

Like many young Kenyans, Matee is passionate about saving the environment, but it’s not just words. She’s hoping that through her actions, the mountain in Dandora will become a mere hill.

The Pandemic Surprise Many Women Did Not Expect? An ADHD Diagnosis.