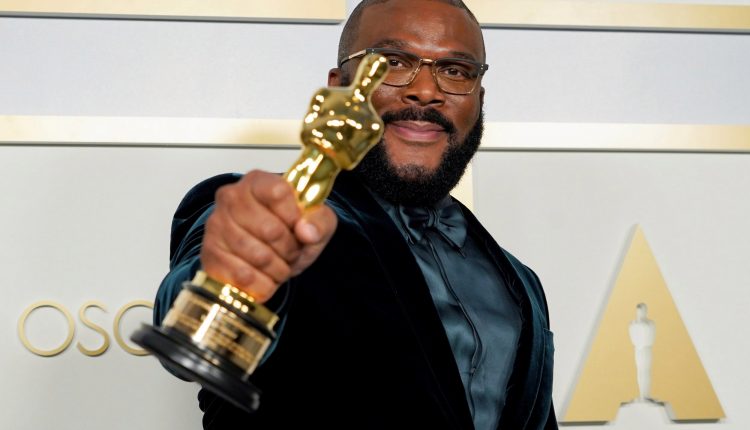 Tyler Perry brought the house down on Sunday evening at the Oscars with a powerful speech on ‘refusing hate’.

The filmmaker was honoured with the Jean Hersholt Humanitarian Award at the 2021 Academy Awards and reflected on his own humble upbringing and days living out of a car as he insisted he only wants to do his best to help others.

In his stirring speech he recalled helping a homeless woman, while also sharing his confusion at those who practice hate.

He told the smaller, socially-distanced crowd at Union Station: ‘When I set out to help someone, I’m not trying to do anything other than meet somebody at their humanity.’

Tyler recalled how, around 17 years ago, he was ‘stopped cold’ when a homeless woman asked if he had any extra shoes he could help her out with.

He said: ‘I remember being homeless, and I had one pair of shoes, they were bent over at the heels. So I was like, “Yeah”.’

He told how he took her to the film’s wardrobe department and the woman was overwhelmed, adding: ‘The whole time, she’s finally looking down. She finally looks up, and she has tears in her eyes.

‘She said, “Thank you, Jesus. My feet are off the ground.”

The 51-year-old filmmaker then discussed his mother’s difficult life and how she had raised him to ‘refuse hate and blanket judgment’.

He compared her lessons to the modern digital age and how it affects people.

He emotionally said: ‘In this time, with all of the internet and social media and algorithms that want us to think a certain way. The 24-hour news cycle. It’s my hope that we teach our kids, refuse hate. Don’t hate anybody.’

Tyler then issued a rallying cry and dedicated the honour to those who would join him in ‘refusing hate’.

Viola Davis had presented Tyler with the award and in her introduction, she praised him for reaching out to help those who were in the position he had once found himself in.

‘Tyler knows what it is to be hungry, to be without a home, to feel unsafe and uncertain. So when he buys groceries for 1,000 of his neighbours, supports a women’s shelter, or quietly pays tuition for a hard-working student, Tyler is coming from a place of shared experience.’

Nintendo Is Suing Bowser, Or At Least Someone Named Bowser

Ramadan 2021: How to calculate Zakat