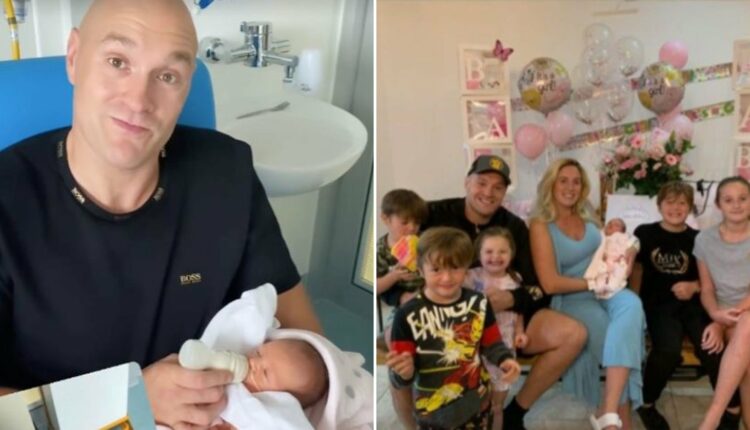 Tyson Fury and his wife Paris are over the moon after bringing their newborn baby daughter Athena home following a stint in the ICU.

The couple celebrated with a family photo, with Paris holding Athena in the middle.

Paris revealed that she’s about to get some serious mum and daughter time, penning on Instagram: ‘Can’t believe we’re home, dad off to training camp and me girl in the room tonight.’

In a previous post, the star shared the sweetest video of the little one and wrote: ‘I’ll love you forever, I’ll like you for always, As long as I’m living, my baby you’ll be.’

Athena, who was born earlier this month, has had a rough start as she was admitted to the ICU and placed on a ventilator. Her parents have so far not revealed the cause.

The mum-of-six previously shared a hopeful update on her new daughter’s condition telling fans she is ‘doing well’, and her five brothers and sisters finally got to meet their new sibling.

While the boxer has now gone quiet on social media as he prepares for his next big match, he was also sharing updates on the newborn, thanking the medical professionals who helped out.

He told his followers on Instagram: ‘Update for everyone. Baby Athena is doing well & has had a stable day off ventilator, thanks to everyone for the prayers, still in ICU for now.

‘Thanks to all the DRs & nurses. God bless you all.’

The dad-of-six is raising money for Alder Hey Family House Trust who run the Ronald McDonald House, Liverpool, which he said has been supporting him and his family.


MORE : Tyson Fury says new baby Athena is ‘on the mend’ and ‘going home soon’ as he shares snap of him feeding her