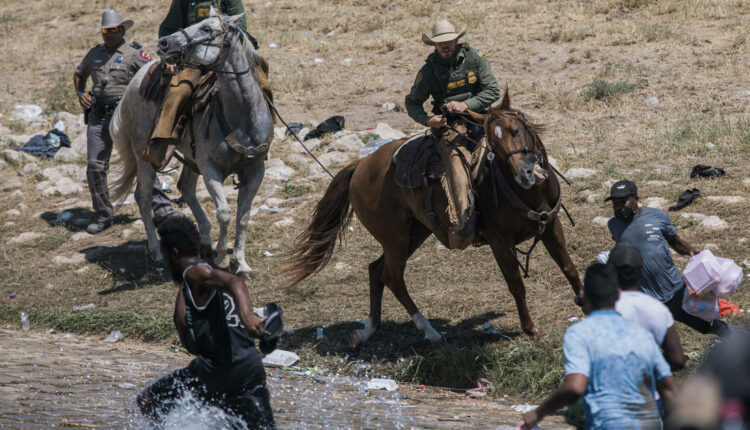 The U.S. Department of Homeland Security on Monday pledged to “swiftly” conduct an investigation into what it called “extremely troubling” footage of Border Patrol agents on horseback aggressively dispersing Haitian migrants, saying the internal probe could lead to disciplinary actions.

“The Department of Homeland Security does not tolerate the abuse of migrants in our custody and we take these allegations very seriously,” a department spokesperson said. “U.S. Customs and Border Protection’s Office of Professional Responsibility is investigating the matter and has alerted the DHS Office of Inspector General.”

Homeland Secretary Alejandro Mayorkas also directed department personnel to deploy to Del Rio, Texas to ensure that border officials there carry out their duties “consistent with applicable policies and training and the Department’s values.”

Some footage showed Border Patrol agents on horseback swinging lariats, a rope used by horse riders, while trying to block the passage of Haitian border-crossers, actions that fueled concerns that agents were whipping or threatening to whip desperate migrants.

In one video, a mounted agent is heard telling a migrant who huddled with a group of women and children, “This is why your country’s sh**, because you use your women for this.” The officer repeatedly tried to impede the man’s path.

The collection of photos and videos provoked significant uproar. White House press secretary Jen Psaki called the videos “horrific” during a briefing Monday, saying, “I don’t think anyone seeing that footage would think it was acceptable or appropriate.”

Congressman Bennie Thompson, the Democratic chair of the House Homeland Security committee, said the mistreatment of Haitian migrants was “disturbing” and contrary to U.S. values.

“I call on Secretary Mayorkas to take immediate action to hold those responsible accountable and ensure that all migrants are treated in accordance with the law and basic decency, as this Administration has promised to do since day one,” Thompson said.

Advocates for asylum-seekers were also alarmed.

“The image of Border Patrol officers on horses chasing black immigrants was horrifying,” said Lee Gelernt, an American Civil Liberties Union attorney who has been leading a lawsuit against the expulsions of migrant families.

In just a matter of days, thousands of migrants, most of them from Haiti, crossed the southern border near Del Rio, overwhelming U.S. border officials and prompting them to establish a makeshift migrant processing encampment underneath an international bridge.

Migrants wade across the Rio Grande from Del Rio, Texas, to Mexico, to shop for food and supplies before returning back to the US side of the border on Sunday, September 19, 2021.

The rapid arrival of thousands of migrants, coupled with the emergence of the massive encampment, prompted the Biden administration to surge hundreds of border agents to Del Rio and to announce a blitz of deportation flights to Haiti, a country reeling from political turmoil, widespread insecurity, crippling poverty and a deadly earthquake in August.

“This is certainly distinct from the other large movements of migrants that we have observed,” Mayorkas said during a press conference in Del Rio on Monday.

Gelernt, the ACLU attorney, expressed concern about the U.S. deporting Haitians, including families with young children, without allowing them to request asylum.

The Biden administration has been using a public health authority, colloquially known as Title 42, to “expel” migrants without allowing them to apply for U.S. protection. The policy was first instituted in March 2020, but the Biden administration has kept it, citing the continued spread of the coronavirus and a 21-year high in migrant apprehensions.

Last week, the ACLU convinced a judge to bar the government from using Title 42 to expel families with children. But the judge paused his order through September and the Biden administration has appealed it.

“The situation of Haitian families at the Del Rio bridge is dramatically illustrating what has thus far been largely out of sight, which is that the Biden administration has not in fact distanced itself on asylum policy from the Trump administration,” Gelernt told CBS News.