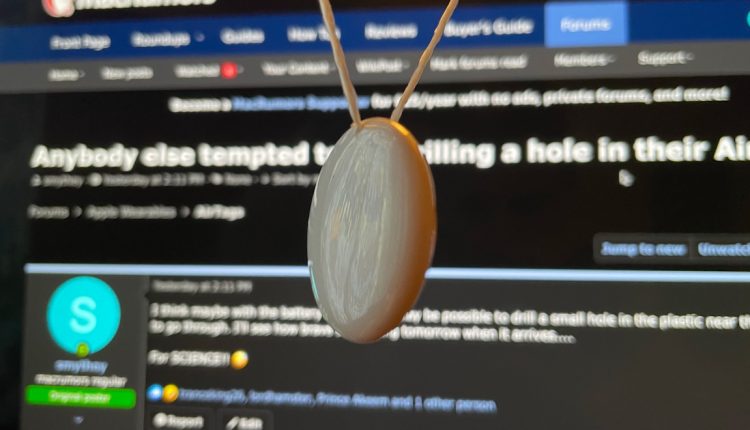 Apple has always had a symbiotic relationship with accessory makers, with the latter feeding off Apple’s new products by designing accessories for it. Sometimes, those accessories fix annoying shortcomings with Apple’s products.

Apple’s new AirTags don’t have any holes or openings, paving the way for companies to design third-party straps, keychains and cases for the tracking device, with some of them selling for an exorbitant amount.

However, MacRumors forum member ‘smythey‘ has proven that you can drill a hole into the AirTag without damaging it, allowing a string or a thin key ring to be fed through the hole. The result is a DIY hole punch that allows you to pass a string or keychain through without having to spend extra money on purchasing an accessory.

It appears smythey was inspired by this video of an AirTag teardown that showed off the internals of the device. It showed that there was some space near the edge that look like it could be drilled out. It’s worth noting that drilling a hole into your AirTag will void Apple’s warranty and doing it incorrectly can leave the AirTag in an unusable condition. Plus, drilling it likely ruins the water resistance. Either way, your mileage may vary (and it may be smarter just to buy a reasonably priced AirTag accessory instead).