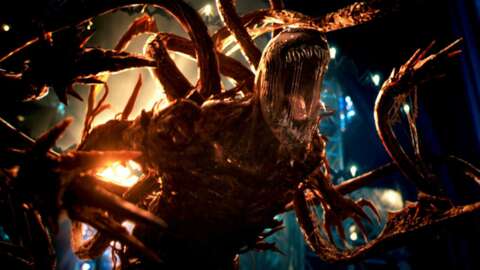 The release date for Venom: Let There Be Carnage has moved forward two weeks. The sequel to Sony’s 2018 hit Venom will now arrive in theaters on October 1.

Venom: Let There Be Carnage was previously set to arrive on September 24, but two weeks ago, it was pushed back to October 15, following a surge in COVID-19 infections in the US. However, Marvel’s Shang-Chi and the Legend of the Ten Rings has opened to impressive US box office results, showing that big movies can still perform well in the theater. There are several other high-profile films also set to have theatrical-only releases in October, including No Time to Die, Halloween Kills, and The Last Duel.

Venom: Let There Be Carnage stars Tom Hardy as Eddie Brock, who is infected with the alien symbiote Venom. Woody Harrelson plays the serial killer Cletus Kasady, who is controlled by the evil symbiote Carnage, and the cast also includes Michelle Williams, Reid Scott, and Stephen Graham. The movie is directed by Andy Serkis.

Sony’s next film based on a Spider-Man character will be Morbius, which arrives in January 2022, having been delayed from July last year. It stars Jared Leto as the “living vampire” Dr. Michael Morbius.

For more, check out GameSpot’s guide to the biggest upcoming movies of 2021.

Suspect in custody after 4 injured in Texas school shooting