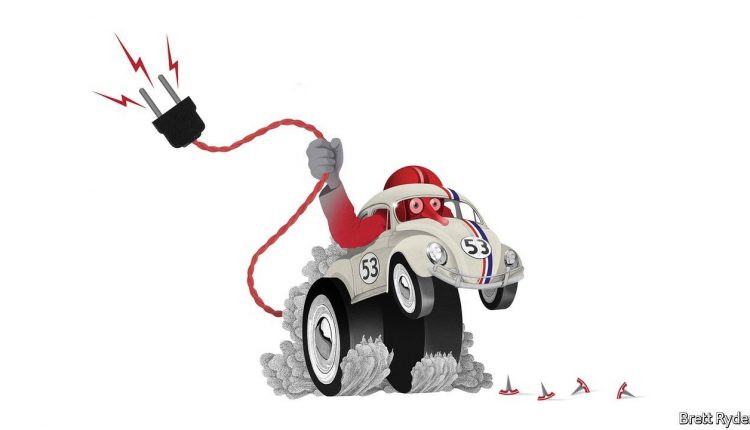 Volkswagen will catch up with Tesla

THERE IS SOMETHING of the “Herbie” about Herbert Diess, boss of Volkswagen Group. Like his four-wheeled namesake, the star of several Disney films, he has a mind of his own and a flair for grabbing attention. He is in a high-stakes race in which he is seen as the underdog. And his main rival, Tesla’s Elon Musk, is a “frenemy” with whom occasionally he banters. Investors are salivating: during the past month the German giant’s share price has surged by 60% while Tesla’s has slipped. That is mainly because of a change of heart about which of the two will win the electric-vehicle (EV) contest. Investors have, it seems, caught “The LoEV Bug”.

It is a spectacular turnaround. For most of last year the EV ambitions of one of the world’s biggest carmakers looked like a smokescreen to hide the lingering fallout of the five-year-old Dieselgate-emissions scandal, bloated costs and fractious relations between Mr Diess and organised labour. But then Volkswagen’s boss pulled off two coups. First, he won the full backing of the supervisory board, ending the showdown with unions. This may enable him to improve lacklustre profit margins. Second, he sought to out-meme Mr Musk. He used shareable videos, Twitter and a virtual “Power Day” to wow the underdog-loving retail investors that helped drive Tesla’s market value to $800bn last year.

It isn’t all fumes. Based on the company’s updates, some car-industry analysts say that within two years or so its marques, including VW, Audi and Porsche, could produce 1.5m EVs, up from 230,000 in 2020. The group may catch up with Tesla, which made 500,000 cars last year—or even overtake it. Only then would the fun really start, however. For alongside electrification, revolutions in automation and e-mobility are fast approaching. Besides Tesla, new competitors such as Apple, keen to affix wheels to an iGadget, and Baidu, a Chinese tech giant, are entering the race. For laggards, it could quickly turn into a demolition derby.

Start with electrification. Volkswagen has little experience of making batteries, whereas Tesla has already been through Mr Musk’s “production hell”. Catching up with the American firm will not be easy. Tesla’s stockmarket value, currently nearly four times Volkswagen’s €135bn ($160bn), gives it huge capacity to raise funds. Mr Diess has excited investors by promising to halve battery costs, partly by producing long-range and fast-charging solid-state batteries from 2024. But he has not put a date on those cost cuts, whereas Tesla is introducing a more powerful battery this year that could lower costs immediately. By 2030, when Volkswagen vows to have built six “gigafactories” capable of churning out 240 gigawatt-hours’ worth of batteries a year, Mr Musk says, with signature ballyhoo, that Tesla’s factories will be producing an order of magnitude more, or around 3,000 gigawatt-hours.

In software, the distance between the two looks yet more daunting. Tesla has set the pace by designing a car as a software product that can be regularly upgraded, like the iPhone. Volkswagen has recently started to do the same with its new ID.3 EV, and has set out to become the biggest computing company in Germany after SAP, a maker of business software. But whereas Tesla has tech in its DNA, Volkswagen’s most notable software achievement was to facilitate the ignominious emissions-cheating. Autonomous driving will add a whole new realm of complexity. Volkswagen is pursuing two types of software development, one for self-driving passenger cars, the other for fleets of autonomous vehicles offering “mobility as a service” (which includes ride-sharing and other alternatives to traditional car ownership). In both cases, tech giants from America and China, as well as Tesla, will be formidable foes. Mr Diess himself acknowledges that as software increasingly turns the car into a computer on wheels, it will transform the industry even more than electrification does.

Yet for a legacy manufacturer, Volkswagen has already made bold moves. The company counts on its vast combustion-engine business to fund a planned €15bn a year in electric and digital investments until 2025.It is already creating a modular platform on which its EVs can be built, rather than jerry-rigging its existing production lines, which adds flexibility. Sensibly, it is designing the car around the battery, rather than the other way around. In order to secure access to batteries as demand for EVs grows, it is, like Tesla, vertically integrating its supply chain. Most EV production, from batteries and chassis to software, will be done in-house.

Other firms under assault from cleaner technologies, like those in the oil business, will study Volkswagen’s efforts closely. As Mark Newman of Nyobolt, a car-battery startup, notes, in industries such as computers and mobile phones that have faced disruption in the past, the usual pattern is for an innovator to build a new product from scratch, as Tesla has done (and as Apple once did). Once the products are on the market, they can be copied, and outsourced by incumbents. Volkswagen’s vertical integration shows that it is not following the same playbook. Mr Diess argues that the long life cycle of a car gives his company more time to catch up than makers of PCs and feature phones had. Whether he is right or not, that makes Volkswagen a fascinating case study.

Legacy firms should observe not just Volkswagen but Mr Diess himself. The changes he has set in motion demonstrate that he is ready to overhaul the old petrol-headed mindset. And just as the firm is copying Tesla, so he is copying Mr Musk—albeit with German characteristics. The buzz he has created around his firm bolsters his position within the group, even among previously restive workers. The more clout he has, the more freedom he may enjoy to reform an unwieldy corporate structure, including spinning off Porsche, a sports-car brand that is fast-becoming an EV gem and could be valued above €75bn. And if one day he builds an affordable, electric, self-driving, Beetle-like icon—a real-life e-Herbie, in other words—then Tesla better call it quits. ■

Understanding & Dealing With The Consequences of Tooth Loss

The economics of covering California’s water system with solar panels