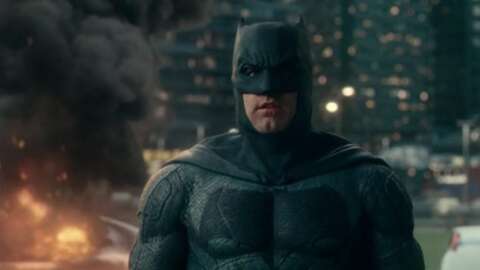 What To Keep From Zack Snyder’s Justice League: A More Humble Batman

Though opinions might vary on the successes and failures of the Snyder Cut, DC should borrow more from its take on Batman for his future outings.

Even wearing a mask with its forehead forever drawn into an angry point, Ben Affleck’s Batman seems really sad in Zack Snyder’s Justice League. The movie kicks off with Superman’s death, and the entire rest of the story is funereal because of it. And almost nobody is mourning harder than Batman–because really, this is all his fault. And here’s the thing about Sad Batman: It’s one of the best conceptions of the character we’ve had in a while.

To understand why Sad Batman is a good thing for the Dark Knight, we have to understand what, exactly, is making him so sad. That takes us back to Batman v. Superman, the Zack Snyder Superman movie that sets the stage for Justice League. That movie opens with a callback to the movie before it, Man of Steel, in which Superman wrecked a big chunk of Metropolis as he fought the evil Kryptonians led by General Zod. Turns out, Bruce Wayne was in town that day and lived through the horrific destruction wrought by two godlike aliens kicking the crap out of each other in the vicinity of mere mortals. This made Batman angry, and he started to think Superman was not such a great dude.

Batman v. Superman is about the two heroes each thinking the other is a bad guy who needs to be brought down. The situation is exacerbated by Lex Luthor, who passes notes between the heroes like he’s in middle school. Then Batman and Superman have their iconic “Martha” moment, find common ground, and unite to fight Luthor’s new monster, Doomsday. Also Wonder Woman is there. Anyway, Superman dies beating Doomsday and saving the world, but the entire situation could have been avoided if Batman hadn’t been so dang stubborn and self-assured about judging who’s good and who’s bad.

So in a very real way, Justice League is all about Batman atoning for a big screw-up, and that’s something we actually don’t see from the character very often. In most conceptions of Batman, at least on film, the Caped Crusader is a lone genius who is in the right in every situation. If he’s outdone by a villain, it’s not for very long. Though Affleck’s Batman notes that his character’s superpower is being rich, it’s Batman’s enormous brain and unflinching belief that he is right that usually saves the day.

Somewhat in the theatrical cut of Justice League and very much in ZSJL, though, we see a Batman who didn’t just get it wrong, he got someone killed. And not just anyone–Batman’s unwillingness to stop and reconsider his own beliefs and conclusions killed Superman. The hope of humanity. The protector of the world. A nearly literal god on Earth (as Snyder repeatedly reminds us with all the Christ imagery). Batman got so twisted up believing he knew best that he made a plan to kill God and it worked and he really regrets it.

All the religious stuff aside–and there’s a lot of it–there’s a cool take on Batman here, because we never really see Batman humbled. Though Batman arguably goes through the roughest physical and emotional tribulations of any of his film versions in Christopher Nolan’s Dark Knight trilogy, he’s still always right. He resists Ra’s al Ghul’s nihilistic belief that Gotham couldn’t be saved; he sacrifices himself to make up for Harvey Dent’s failure to deal with grief and loss; he outsmarts the Joker through his faith in the people of Gotham.

Even in the vaunted Batman: The Animated Series–probably my favorite version of Batman–he’s rarely, if ever, simply wrong. Batman’s biggest flaw in that series is that he’s so right, so often, that he’s an enormous jerk about it. He’s constantly castigating people like Robin for not doing things his way, which is what ultimately drives a wedge between him and his ward, Dick Grayson. In the Animated Series, Batman can’t even fathom the possibility that he’d be wrong, and it’s what drives a lot of his character (and his unfaltering moral and analytical mind is usually how he defeats the villains in the end).

But lately, we’ve started to see mainstream Batman stories and pop culture at large questioning the very idea of Batman. There’s a great joke in The LEGO Batman Movie about the effectiveness of one rich dude going out every night to punch poor people in attempt to stop crime throughout a city, especially when Bruce Wayne’s money could probably do a ton more good funding social programs, shelters, and housing that would do way more to reduce crime. The Batman v. Superman version of Batman goes even further in being awful by actually branding criminals, maiming them with his logo. Having the Bat symbol burned into your face is probably not going to make it easy for an ex-con to get a job.

So what I like about Batman in Zack Snyder’s Justice League is that he’s forced to come to terms with being wrong (although unfortunately not in that base-level reassessment of his criminal-punching entire deal, which would be more interesting). This is a flawed version of the hero who is forced to face his failures, and spends the entire movie trying to make up for them and grow from them. What’s cool about Batman in ZSJL is that he kind of sucks as a superhero as well as a person. Bruce Wayne spends half the movie building a team of literal superbeings who then fight an alien warlord and his flying bug-man army. When they fight, Batman goes the whole film punching, like, one bug-guy at a time, while Aquaman is crashing through buildings, Wonder Woman is slicing heads off, and the Flash is reversing time. Batman, by contrast, shoots a few guys with a laser and, uh, drives a car.

Batman, for once, knows that he’s not the guy in ZSJL. He’s there to coach, not to play. He got Superman killed and now the world is threatened, and the only thing he can do about it is recruit stronger, better people to fight with him. It sure seems like most of Batman’s plan throughout the Snyder Cut at key moments, like during the resurrection of Superman or the final assault on Steppenwolf’s base, is to die. When he stands in front of Superman, the resurrected god, Batman is begging Superman to remember who he was. But Batman also had to have known that the Pet Sematary version might have just melted him where he stood, too–and Bruce kind of expected it to go that way. When the team attacks Steppenwolf’s base, Batman’s plan is to draw the parademons away with the Batmobile so the other heroes can stop the Mother Boxes–and he definitely doesn’t seem like he expects to survive that gambit. It’s only because the other heroes show up to save him, breaking from Batman’s plan, that he’s saved.

The point is that a fallible Batman is the most interesting Batman that exists, and in some ways, Zack Snyder’s Justice League feels like it advances Batman as a person more than most other conceptions of the character. We still get what kind of man Batman is–one willing to do anything to protect others, one willing to sacrifice himself if it means his friends can get the job done–but he’s maybe growing beyond thinking he’s right all the time, or that his grief is the only grief that matters. If DC is going to continue to throw new versions of Batman at us, it would do well to keep in mind what a more humble, more introspective take on its hero might bring to his stories.