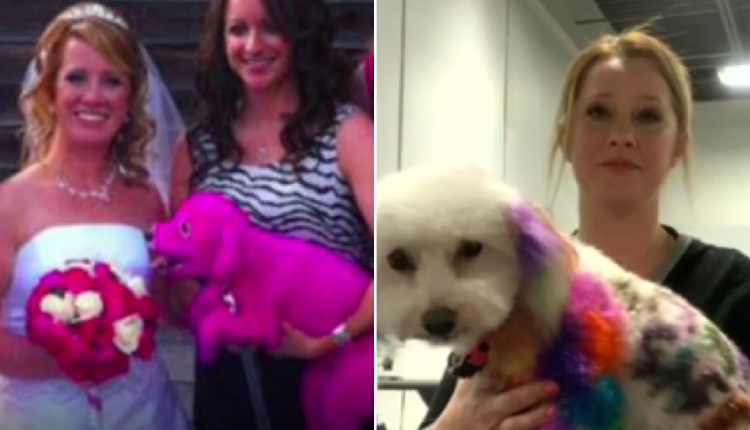 A woman has defended dying her pet dog Stella and has argued that her bright-coloured fur makes her happy.

Nicole from Canada joined Holly Willoughby and Phillip Schofield on today’s This Morning where she hit back at critics over colouring her pooch’s hair, claiming that it brings her out of her shell.

Currently, Stella is partly green, purple, green and blue, but she had once been completely pink thanks to a dog-friendly vegetable dye.

‘That’s a hell of a colour,’ exclaimed Phil, as a throwback photo was displayed on-screen.

‘That looks like it’s been photoshopped!’ added Holly. ‘That’s full face! That’s right up to the eyes. When I look at that I go, “is that ok?” I’m not sure.’

Explaining the all-over dye, Nicole replied: ‘The hair dye varies depending on the dog. So for Stella, because she loves it, she is super, super still.

‘In the picture, you can tell there is a tiny bit of white left around the eye where we didn’t go quite close.’

Nicole added that she had put mineral oil in Stella’s eyes to protect her.

‘She’s so still, it was super safe for her,’ she said. ‘We wouldn’t do it on a client’s dog because we can’t trust they’d sit still for it.’

Nicole revealed that Stella is a rescue and that she came dyed.

‘We shaved it off and it grew out and she just laid in her bed and moped,’ she revealed. ‘We decided to dye her again. She was just so happy and ran around the salon.

‘I think because she gets a lot of attention when she’s coloured. It really brings her out of her shell.’

This Morning airs weekdays from 10am on ITV.