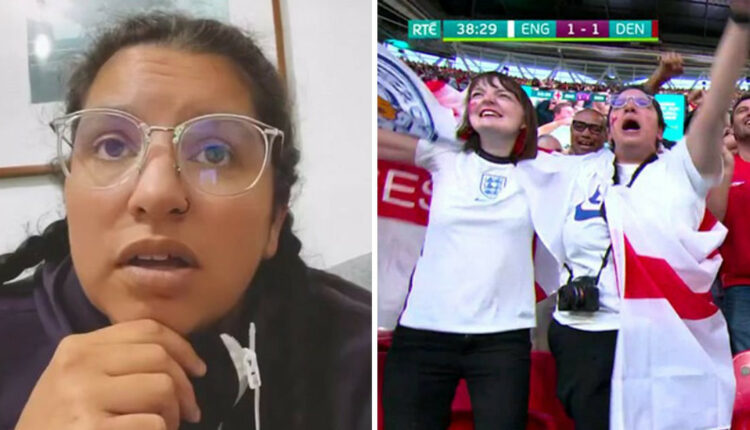 A woman who was sacked after pulling a sickie to go to the Euro 2020 semi-final took on a new role as a football pundit for Pizza Express last night.

Nina Farooqi, 37, from Ilkley, West Yorkshire, pretended to be ill so she could watch the England vs Denmark clash at Wembley Stadium.

Her plan went awry when heartwarming scenes of her celebrating England’s equalising goal were picked up by broadcasters around the world.

The digital content producer took a 6am train to get back to work on time – but received a call from bosses at decking company Composite Prime telling her not to bother.

But one company wasn’t put off by Nina’s unyielding loyalty to the Three Lions.

Nina took to Instagram Stories to advise people to ‘enjoy the game – and don’t get fined like me’ just before kick-off.

She hailed the ‘perfect start’ as Luke Shaw netted the ball in the first two minutes. The pundit applauded a woman in the crowd dressed as a pizza, before interviewing friends in her living room using her TV remote as a mic.

But heartbreak was in store as Italy equalised and then triumphed following a tense penalty shoot-out.

Following England’s agonising defeat, Nina filmed herself shaking her head, telling viewers: ‘I have no words.’

Speaking about her plunge into unemployment before the final, Nina said she ‘would do it all over again’.

She told The Daily Telegraph: ‘They said they’d seen I’d been at the game, and I was honest about why I did it.

‘But I didn’t get any sympathy at all and they said that’s it. That’s their call and the consequence of what I did.

‘It’s mixed emotions: we’re through to the final, I’m still on that high, but I’ve also lost my job.

‘There is a bit of regret, no one wants to get fired, but then also I would have hated the regret of missing out. I’d do it all over again.’

A Better Approach to Group Editing

Ben Fogle shares joy as his young children go on expedition without him to gain ‘absolute independence’: ‘It’s up to them to stand or fall by their own mistakes’

Emmerdale spoilers: Sarah Dingle panics as she meets the sister of her heart donor

Happy Caturday: what is it and when did it start?

Jennifer Aniston Says She Had to Cut Some Unvaccinated…

Harry Kane in contention to make Tottenham comeback against…