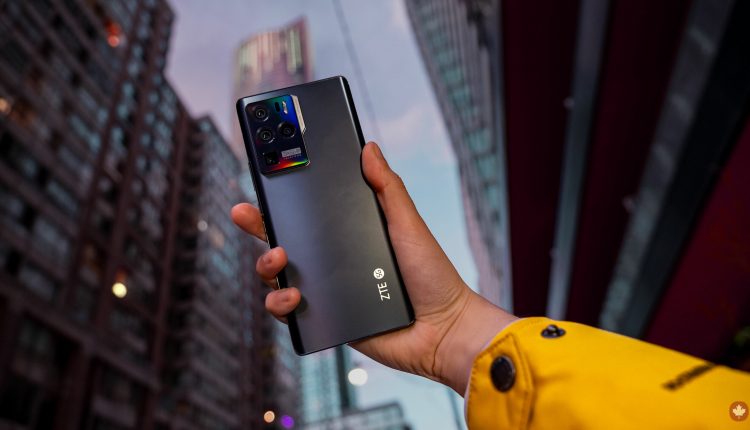 I’ll come right out and say: I haven’t spent that much time with ZTE’s smartphones.

Since they’re not available at Canadian carriers, I don’t know anyone with one. I’ve also never felt the urge to test one myself — that is, until now.

After going through the gauntlet of reviewing the Red Magic 6, a ZTE offshoot company, the flagship brand offered me the Axon 30 Ultra 5G to test. Luckily, I had a pretty clean slate of features at the time, so I jumped at the opportunity to get my hands on this device, despite it being unlikely to make a significant dent in the Canadian market.

Still, even without being a prime candidate for Canadian smartphone buyers, there are several really great things — and some not great things — worth considering if you plan to pick this device up for its full price of $749 USD (roughly, $907 CAD). 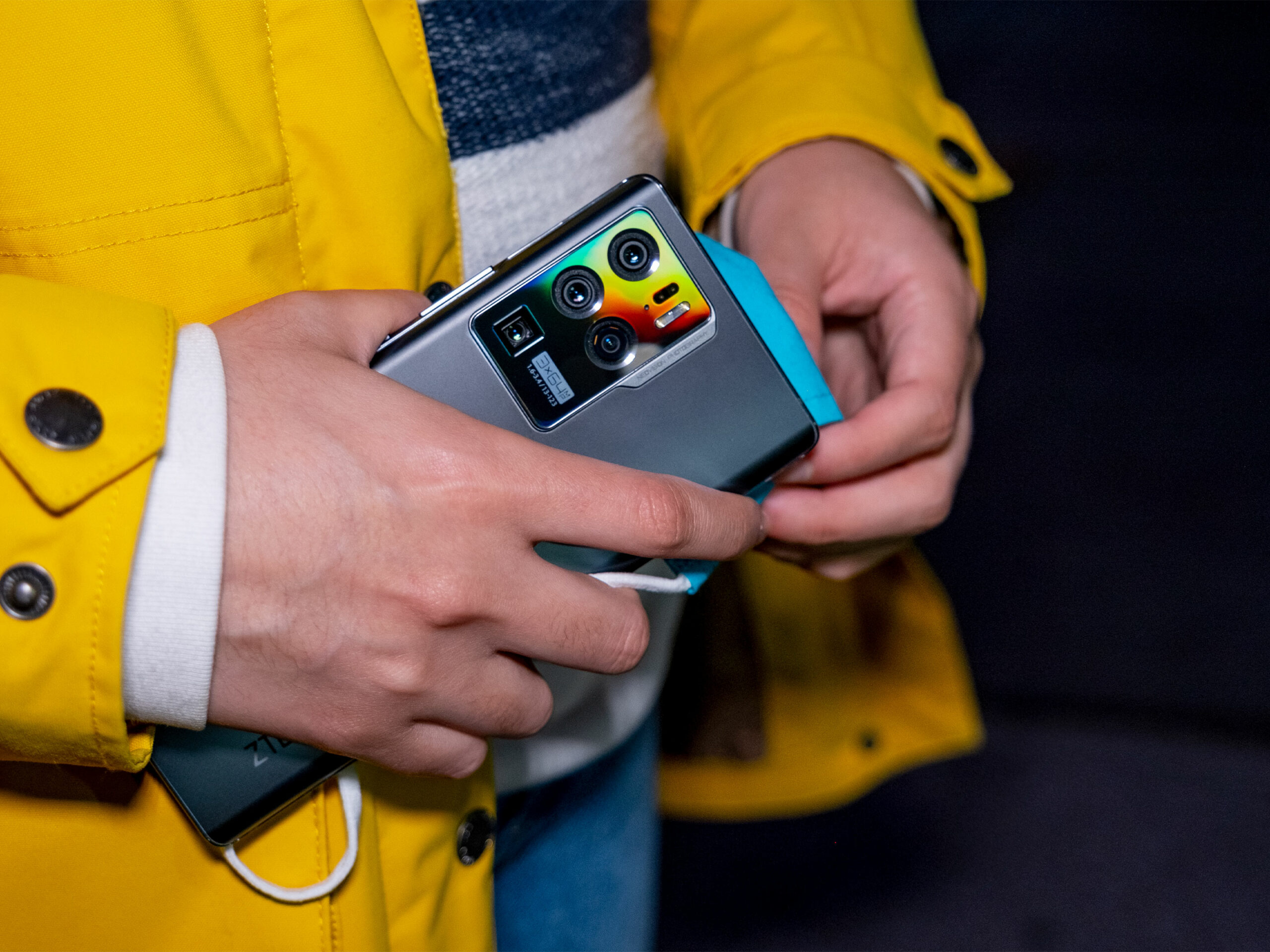 The best thing about the Axon 30 Ultra is its slim design. I won’t go as far as to say it feels as premium as an iPhone or a Samsung S series device, but it’s close. The coating used on the back of the Axon 30 Ultra coupled with its thin 8mm profile, make it incredibly pleasing to hold. I’d even go as far as to say that it’s way nicer in the hand than even the OnePlus 9 and 9 Pro.

Though the ZTE Axon 30 Ultra features a massive camera bump, I’m willing to forgive this shortcoming since the device feels so nice in my hand and is tall enough that my fingers barely touch it.

The back isn’t the only good part about the device either. The large 6.67-inch AMOLED display on the front is a standout with its 144Hz motion and a dense 1080 x 2400 pixel resolution display with a PPI of roughly 395. 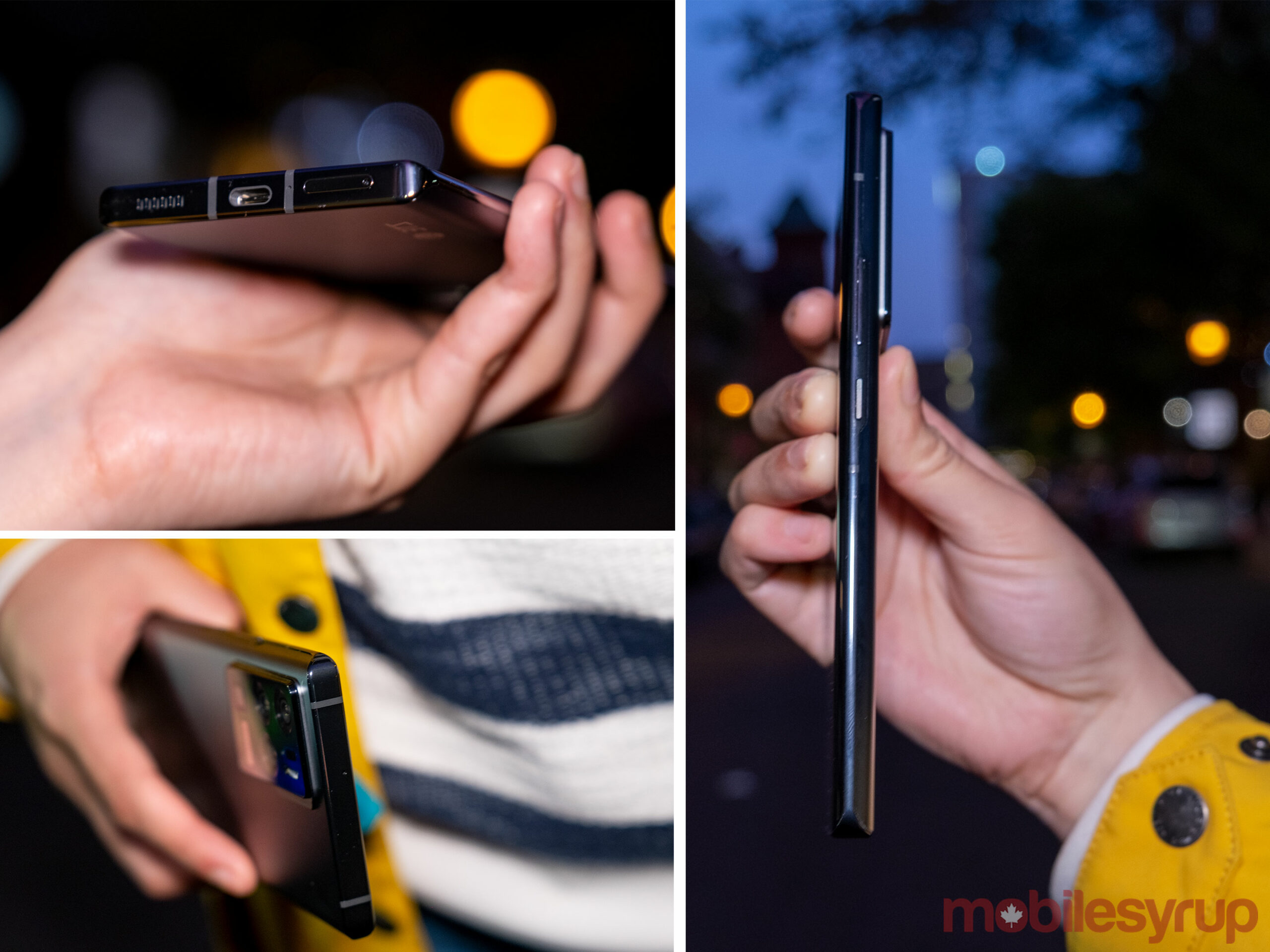 All the pixels are pushed by the top-of-the-line Qualcomm Snapdragon 888 chipset and either 8GB or 12GB of RAM depending on what storage configuration you choose.

All of this comes together to create a slick phone that feels great to hold and to look at. Even the ‘MyOS’ skin that’s slapped on top of Android 11 looks great as far as third-party Android skins go. The design language is consistent, the notifications shade is well organized and the large quick settings toggles even looks more like Android 12’s new design than most current Android 11 skins. All of this is to say that sometimes phones overdo their Android skins, and while the Red Magic 6 Pro was one of those devices, the Axon 30 Ultra is not.

“ZTE says that it uses computational photography techniques to remove edge in a way that’s similar to the OnePlus 9 series’ hardware.”

My only gripe with the operating system is that for some reason, when you group apps into a folder and then open that folder, all of the apps are placed weirdly high on the screen, making it a feat in finger gymnastics to reach them.

Not one, not two, but three 64-megapixel cameras 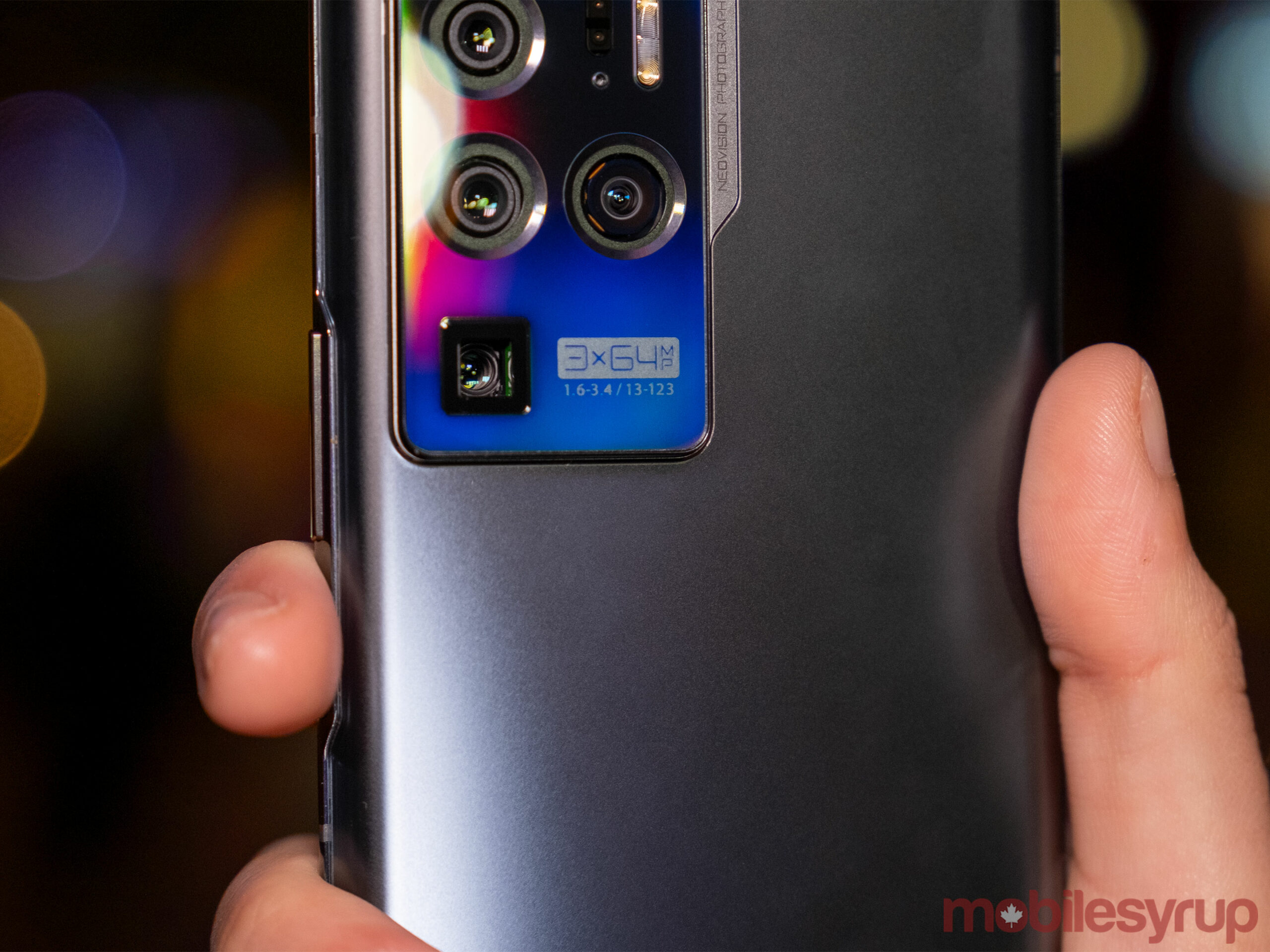 The camera is one of the other things that stands out about the Axon 30 Ultra, and that’s not just because of its enormous camera bump.

ZTE says that it uses computational photography techniques to remove edge in a way that’s similar to the OnePlus 9 series’ hardware. In my tests, this worked well and showed that maybe OnePlus’ hardware was a little unnecessary.

All of this should amount to an incredible camera, but during my time with it I found it to be really good only some of the time. For example, bright sunlight makes images a little desaturated. For the most part, the pictures were really crisp, even when blown up on a 27-inch 4K monitor. While I loved the punchy contrast from the OnePlus 9 cameras, there’s something about the sharp details and the more natural focus that continued to impress me at almost every turn.

But, wait, there’s more. The company also tacked on an eight-megapixel sensor attached to a 60x zoom lens to make shooting far away shots possible. In reality, this 60x zoom is pretty much a bust, and I found it very unreliable in terms of quality. That being said, there is a 5x zoom option in the camera app that works really well.

If you’re a hardcore photographer, you can also use this phone to shoot in RAW and apply your own custom 3D look up tables (LUTs) to photos to give them a unique look. 3D LUTs are a higher-level photo filter that gives colourists a really fine degree of control over the colours in the shot.

The final thing I liked about the ZTE Axon Ultra’s camera setup is that it simply has a really great shutter button sound. It might be a little overdone, but the vintage-inspired sound of a film camera’s shutter snapping closed is a nice touch.

Overall, The ZTE Axon Ultra features a decent camera. However, lately, I’ve been finding people enjoy smartphone cameras more like a polaroid or a disposable camera. Generally, I think people enjoy a slightly more processed and defined colour rather than photos that are technically correct but don’t pop on screen. So for a lot of people, I think they should pass on the ZTE for this reason and go with a OnePlus 9 series or a Samsung smartphone.

Of course, it’s not perfect… 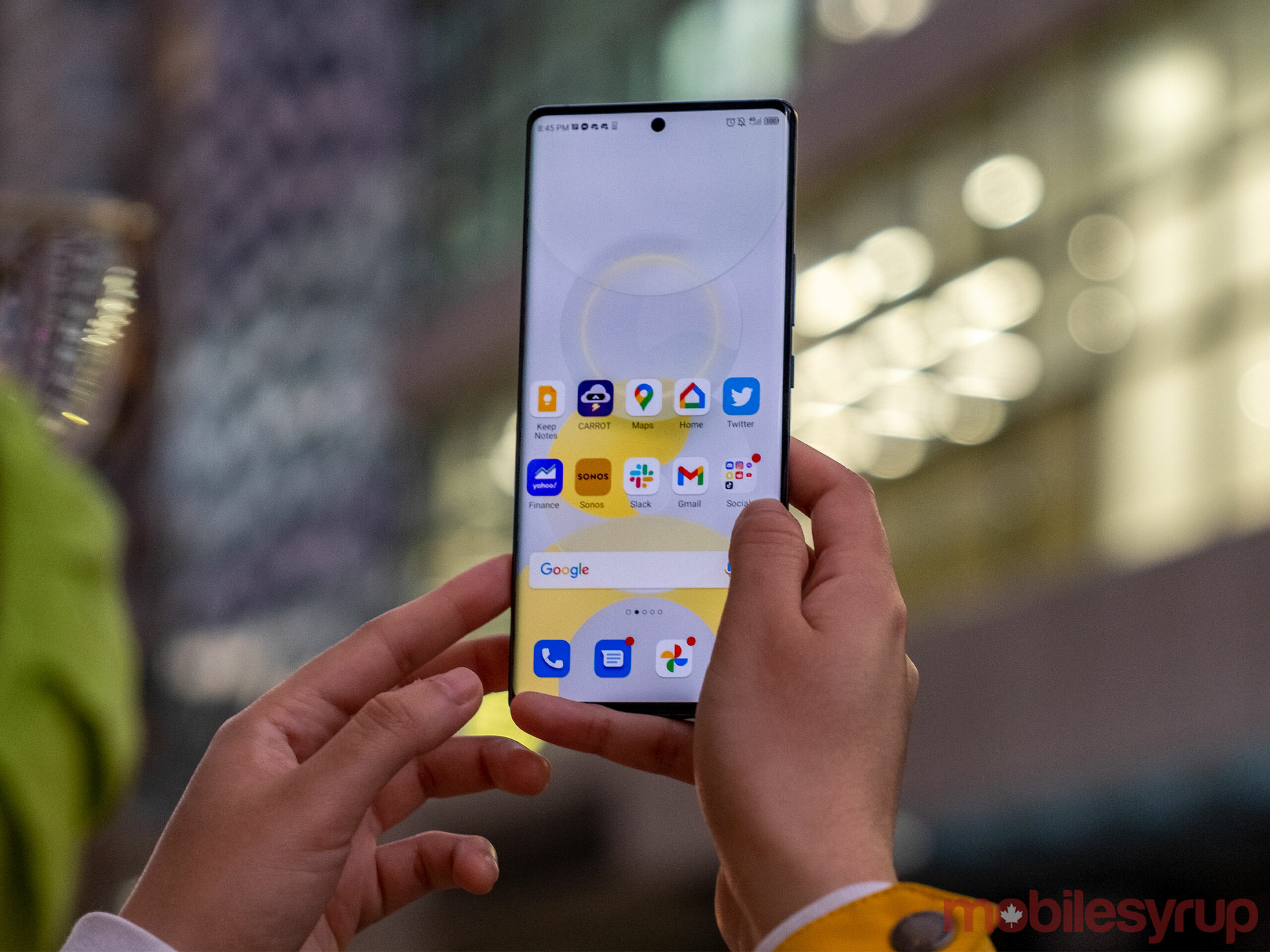 While the ZTE Axon 30 Ultra might offer high-end specs, allowing it to masquerade as a true flagship, there are a few tiny things holding it back from competing squarely with Apple, Google, Samsung and OnePlus at the top of the totem pole.

For one, the phone’s haptic motor feels really low-budget. This was a huge blow to the phone for me since it made the generally impressive-feeling device feel like a cheap Motorola from 2013 every time I used the back gesture or wanted to type something. In the end, I had to turn off vibration and haptic feedback altogether. This isn’t going to make or break the device, but for around $900 CAD, I expected more.

Beyond that, another feature that keeps it out of the flagship race is its lack of an IP water/dust resistance rating. In 2021, getting your hands on an IP67 phone for this price is really easy, so it’s sad to see ZTE exclude the feature from the Axon 30 Ultra. 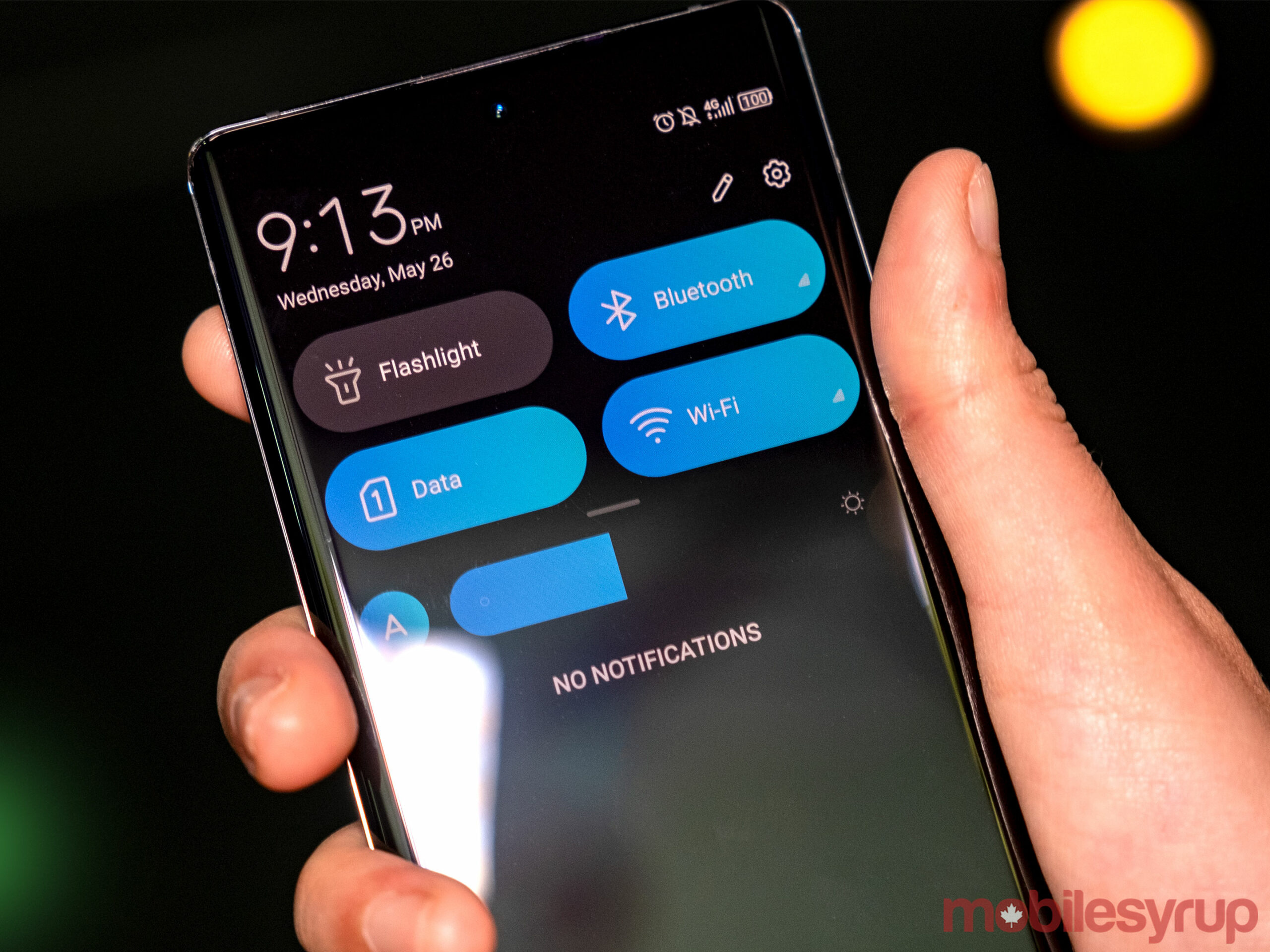 One quirk I noticed with the phone is that its always-on display — which has tons of cool customization options — experiences trouble with notifications sometimes. For example, if you’re using chat bubbles in Android 11, whether it be Facebook Messenger or Android Messages, having a bubble on your screen means that it’s impossible to clear the notification from the always-on display. Once you close the bubble, it goes away, but it’s a pretty annoying oversight when a screen meant to show off notifications can’t do that well.

The speakers are also a little underpowered and once you get them up to full volume, they offer mushy sound, and vocals get lost in the background of songs pretty quickly. If you listen to a lot of music from your smartphone’s built-in speakers, there are better options out there. 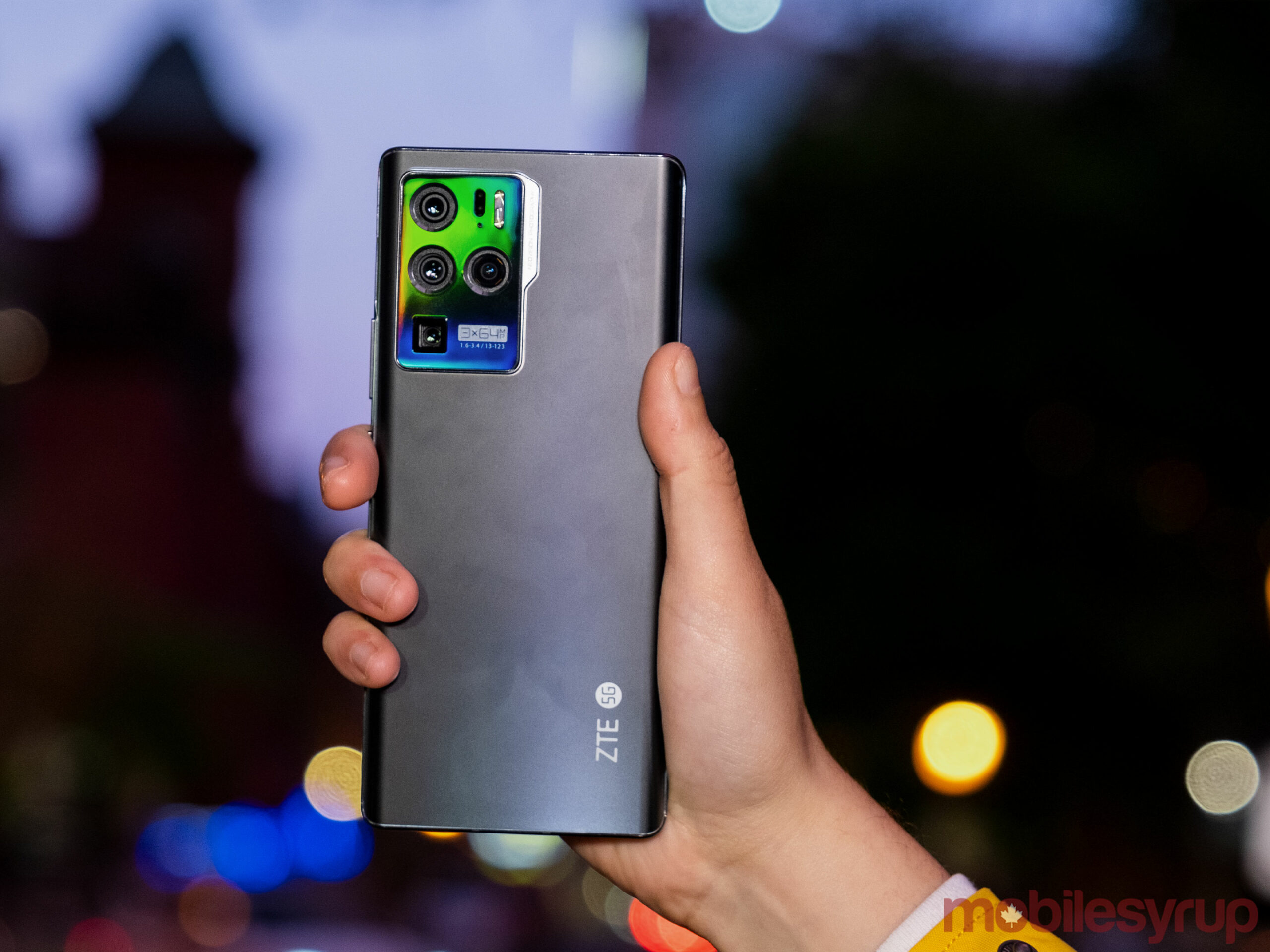 How it all comes together

When it boils down to it, the ZTE Axon 30 Ultra 5G is actually a much better phone than I was expecting. Most of my gripes relate to features that can be disabled, and the solid hardware design and camera make it a really appealing device.

I probably won’t be recommending it to my friends anytime soon since there is no way to get it subsidized from a Canadian carrier, but if you have around $1,000 to burn on a phone and you want something unique, the ZTE Axon 30 Ultra 5G is totally usable and even offers a few surprises.

ZTE also announced that it will support the Android 12 beta on this phone so it’s likely going to get a lot of the Android 12 features before other phones.

“If you have around $1,000 to burn on a phone and you want something unique, the ZTE Axon 30 Ultra 5G is totally usable and even offers a few surprises.”

Miles Teller Allegedly Punched in the Face During Hawaii Vacation