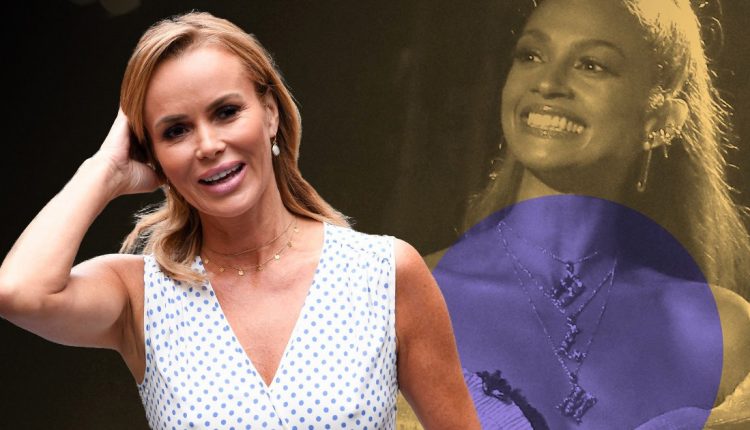 Amanda Holden has backed Alesha Dixon for standing up for Black Lives Matter on Britain’s Got Talent, but admitted she didn’t notice the subtle nod in her outfit at first.

The BGT presenter, 49, admitted her ‘eyes’ were to blame for her not spotting the message in Alesha’s necklace, which spelled out ‘BLM’ in chunky gold letters.

She told HuffPost UK: ‘I didn’t even realise she was wearing it! I was sat right next to her and was like “Oh, that’s lovely!”

Alesha had chosen that necklace to wear the week after Diversity’s performance on the show sparked over 24,000 complaints to Ofcom.

The dance troupe had performed a routine inspired by the Black Lives Matter movement, which some viewers took issue with.

Ofcom released a statement saying that they would not be investigating the complaints, saying: ‘We carefully considered a large number of complaints about this artistic routine, an area where freedom of expression is particularly important.

‘Diversity’s performance referred to challenging and potentially controversial subjects, and in our view, its central message was a call for social cohesion and unity.

‘Any depictions of violence by the performers were highly stylised and symbolic of recent global events, and there was no explicit reference to any particular political organisation – but rather a message that the lives of black people matter.’

Amanda added that Alesha ‘doesn’t intend on backing down about such an important social issue’, but that she doesn’t need anyone else to fight her battles.

She added: ‘Alesha believe me is tough and can fight her own corner. She doesn’t need me but she’s got me right there if she needs me… I’ve got a mouthguard and a hot towel ready.’