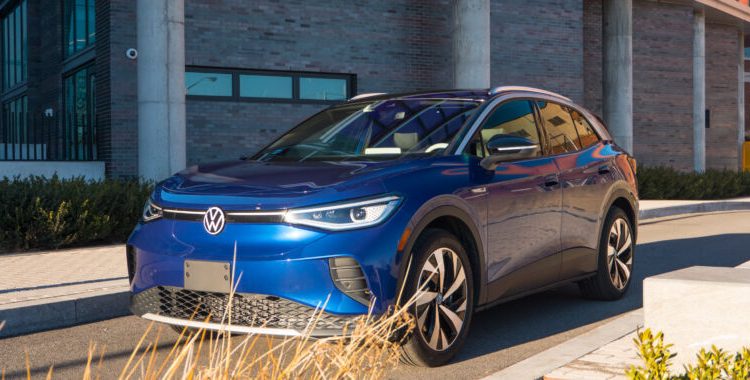 As important as the Beetle? Two days with Volkswagen’s electric ID.4

The Volkswagen ID.4 is a big deal for its manufacturer. After getting busted six years ago for fibbing about diesel emissions, VW underwent a corporate transformation, throwing all its chips into electrification. As a big believer in modular architectures that it can use to build a wide range of vehicles from a common set of parts, it got to work on a new architecture just for battery electric vehicles, called MEB (Modularer E-Antriebs-Baukasten or Modular Electrification Toolkit).

Since then, we’ve seen a dizzying array of MEB-based concepts, including that electric bus that everyone wants, and even a bright green buggy. But the ID.4 is no mere concept. It’s the first production MEB vehicle to go on sale here in the US, designed with the crossover-crazy US market firmly in mind. Last September we got our first good look at the ID.4 under studio lights in Brooklyn, and a month later, Ars got to spend 45 minutes on the road with a pre-production ID.4. But now we’ve had two full days in a model year 2021 ID.4 1st Edition, getting to know it on local turf.

Volumetrically, it’s about the same size as a Toyota RAV4 or VW Tiguan: 181 inches (4,585 mm) long, 73 inches wide (1,852 mm), and 64 inches tall (1,637 mm), with a 109-inch (2,766 mm) wheelbase. Depending on the angle, it can be quite a handsome shape. That’s helped by the way the 1st Edition’s aerodynamic 20-inch alloy wheels fill their arches, helping convince the brain that the car is smaller than it actually is, as well as the designer’s trick of making bits disappear by cladding them in glossy black panels.

At a measurement of 0.28, the ID.4’s drag coefficient would be considered very slippery just a few years ago. VW says it could have lowered that figure by making it a fastback (like the Audi e-tron Sportback or MEB-based e-tron Q Sportback), but that would have compromised rear headroom and cargo capacity.

American-made ID.4s will begin churning out of VW’s Chattanooga factory next year, and sometime after that we should see a ~$35,000 version with a smaller battery pack using locally made cells. Until then, there’s just a single pack option with a useable capacity of 77 kWH (82 kWh total capacity), made of 288 pouch cells split across 12 modules.

For the time being, range is the main thing people want from a battery EV. The official EPA rating for the ID.4 is 250 miles of range (402 km) from the battery’s useable 77 kWh. I averaged 3.3 miles/kWh, using both the heating and air conditioning thanks to some late February weather that ranged from below freezing to warm enough for short sleeves in the space of a day.

The vast majority of ID.4 owners will plug them in each night, and with enough amps, the onboard AC charger can reach 11 kW, recharging the battery in 7.5 hours. A DC fast charger takes just 38 minutes to charge the ID.4 from five percent to 80 percent, at a maximum of 125 kW. (As we have found with most other BEVs and fast charging, if you arrive with a greater state of charge, it still takes roughly the same time to get to 80 percent; the battery just draws a lower amount of power.) VW is even including three years of unlimited DC charging with Electrify America, which is good news for potential buyers who don’t have a garage or carport where they can charge at home.

The new ISO15118 Plug and Charge protocol hasn’t made its way to the ID.4 yet, but VW tells us that should arrive with the first over-the-air software update later this year. Once that happens, you won’t even need the Electrify America app on your phone, as the car will handle authentication and billing when it handshakes with the charger.

By now I’ve sat through at least three briefings about the ID.4, and each time VW stressed that it wanted to make a crossover to appeal to normal VW customers, something that could tempt the electrocurious out of a Tiguan without scaring them. That’s achieved in part by the interior, which is instantly recognizable as a VW through the design language but also the use of materials, like the pebble-textured soft plastic that it so often uses for dashboards and door cards.

Our 1st Edition stands out by having a white steering wheel, as well as whimsical Play and Pause symbols on the pedals, but as you’ll see in the gallery above, it looks a lot more sober with a black steering wheel. Ahead of the driver is a 5.3-inch main instrument display, and to the right of it, the drive selector. Twist it away from you to engage D (or B, which increases regenerative braking), and toward you to engage reverse. To park, simply push the button on the end. Turn signals and windshield wipers are activated by conventional stalks, and there are the usual controls on the wheel for adaptive cruise control and media.

We’ll get to the infotainment experience in a bit more depth shortly, but the 1st Edition and ID.4 Pro S both use a 12-inch touchscreen infotainment system, with a smaller 10-inch unit in the ID.4 Pro. Unlike some other new BEVs, there are still plenty of soft-touch buttons to push for common controls like the wing mirrors, climate, volume, lights, and so on.

Creator or Creature? A Nightmare Wakes dramatizes the birth of Frankenstein