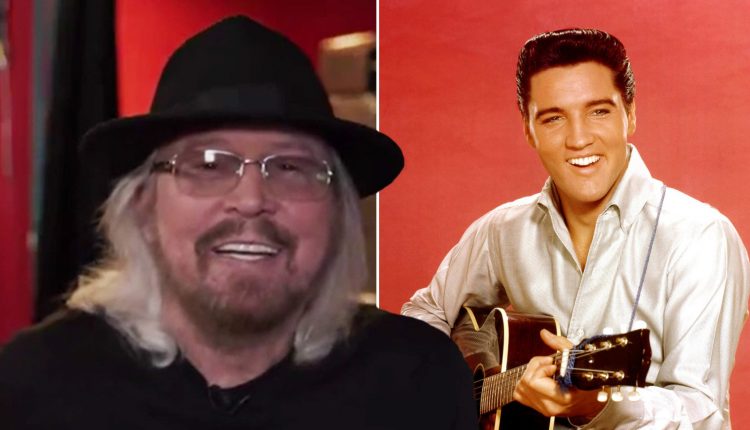 Barry Gibb recalls the time he missed out on meeting Elvis Presley: ‘I got as far as the front door’

Barry Gibb has opened up on the time he almost met Elvis Presley – but the legendary entertainer didn’t answer the door.

The Bee Gees star, 74, told The One Show’s Alex Jones and McFly’s Harry Judd about the time he stopped in to say hello to Elvis after Elvis had performed a version of the band’s song Words in Las Vegas.

He revealed that he visited Elvis at his home, Graceland, in Memphis, Tennessee, but he didn’t get an answer when he knocked on the door.

Barry explained: ‘I was allowed to go up the driveway – the yellow brick road if you like – and I got to the front door and there was a limousine there.

‘His uncle told me I could go up there and knock on the door and I might get to meet him. I didn’t. He didn’t come to the door for whatever reason, but I got as far as the front door and knocked.

‘But that’s ok, I looked inside the limo and saw the first television in a car I’d ever seen and that was all a thrill anyway.’

Barry has also just released his new album Greenfields – The Gibb Brothers’ Songbook Vol 1 which contains country covers of their most iconic songs.

He told EW: ‘I just felt that country music was really what was inside me. [Steven Gibb, his son] played me a Chris Stapleton track, and it just destroyed me.

‘I thought, this is where I belong… This is a new era, and I’m no longer that other person.

‘I can now follow what I love the most, which is real songs, country songs, bluegrass songs — I just love ’em. It’s time to do what I love and not what everyone asks me to do.’

The One Show airs weekdays from 7pm on BBC One.


MORE : The retro Palm Springs house where Elvis Presley honeymooned is up for sale for £1.85 million