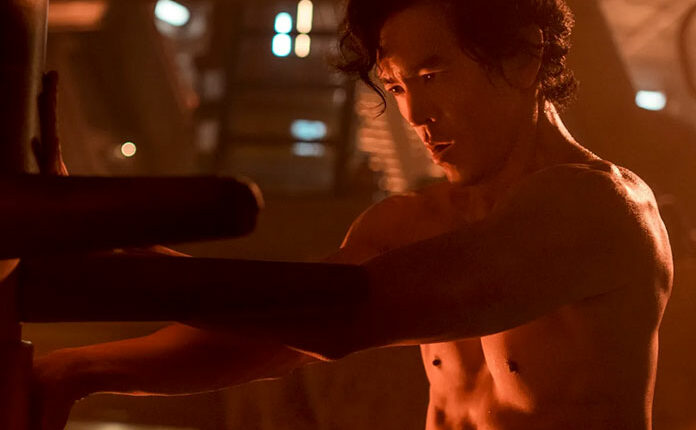 The action-heavy production was famously impacted not just by COVID-19 protocols but also a major injury of the show’s main star John Cho.

The 49-year-old actor, who plays the lead character of bounty hunter Spike Spiegel, tore the ACL ligament in his knee very shortly after filming began.

Rather than recast, production waited several months while he underwent physical therapy. Speaking to Vulture, Cho explained how the injury forced him to change his approach to the role somewhat:

“We had been shooting all night, and I was doing kind of an athletic move as the sun was coming up. It was probably a lack of sleep. Just a little move and [I was down].

Then you have your surgery and you go into rehab. I’m at home doing these knee exercises, and coming off the drugs, I was thinking about “Cowboy Bebop.” Doing those knee exercises, I was like, I gotta put my focus into this…

I felt very guilty that I had let the production down, and my cast, and the crew in New Zealand that had had a job, and then they didn’t the next day. And I didn’t feel that I could come back and half-ass this role. I had to take it deadly seriously.”

Along with forcing him to physically prepare, Cho tells the outlet his age enabled him to do deeper with his character and he feels better suited for the part than had he been a twenty or thirysomething:

“I am strangely better suited at this age. I don’t think I would’ve done justice to the emotional depth we tried to give Spike. There’s always a trade-off.

What young men are typically best at as actors is rage. And that might’ve been a more pronounced element in the character. What I’m better at, being older, is showing weakness and vulnerability and love.

Those things are more accessible to me. Personally, I’d prefer the version I’m able to do now. That’s my taste.”

Here are the Samsung Galaxy S22, Google Pixel 6 and notch-less iPhone leaks from this past week