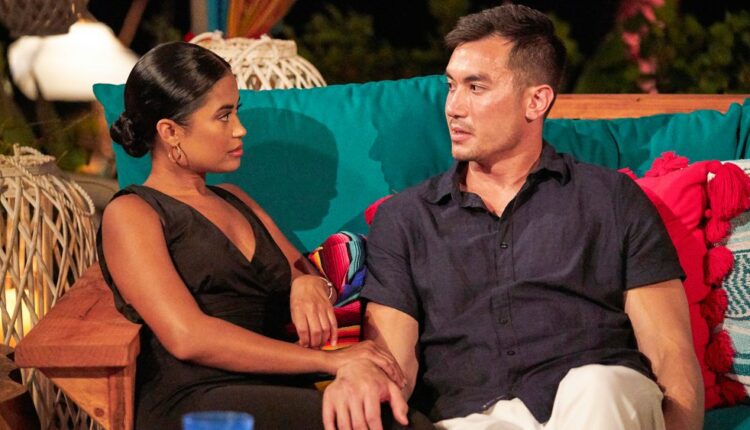 Another couple who planned their relationship ahead of time? Chris Conran found himself in the midst of drama during the Tuesday, September 7, episode of Bachelor in Paradise.

Guest host Tituss Burgess kicked things off by arriving with news of a VIP party that only a select group of contestants would be invited to attend. At the soiree, Chelsea Vaughn, Mykenna Dorn, Alana Milne and Alayah Benavidez mingled with the cast to see if they could form a connection and join the house.

Chris immediately set his sights on Alana, whom he had met a few times before the show. He subsequently made out with her, and Jessenia Cruz walked by to witness the steamy moment. Chris told a blindsided Jessenia he didn’t expect to have feelings for Alana, but they were both on his Paradise list. After declining to give Jessenia an answer about where they stood, Chris repeatedly kissed Alana on the dance floor in front of Jessenia, who left the party early and said she and Chris were done.

The next day, Alana arrived on the beach with a date card and asked out Chris. He told her he would love to accept but needed to talk to Jessenia first. However, he made a speech announcing his decision to go with Alana before speaking to Jessenia, who told him they had nothing to discuss.

Back at the beach, Joe Amabile claimed that Chris asked him how he got popular after the show, while Jessenia alleged that Alana questioned her about followers. They wondered whether Chris and Alana planned their romance before filming.

When Chris and Alana returned, Jessenia, Joe and Riley Christian confronted Chris. He denied having a relationship with Alana before the show, but they felt he was only there for clout, so Jessenia told him he needed to go home. Chris asked Alana to leave with him, but she declined since she wasn’t ready to be committed to him after one date. They both chose to exit alone since everyone was so mad at them. Natasha Parker then wondered why no one was that upset about her situation with Brendan Morais and Pieper James.

Becca Kufrin, meanwhile, was interested in growing her connection with Aaron Clancy, but Chelsea asked him on a date when she arrived. Becca was thrown off since the experience was different from how her relationships played out when she was the Bachelorette and she had never not received a rose during her history with the franchise.

Becca later got a date card and asked Tammy Ly whether she would be OK with her asking Thomas Jacobs. Tammy told her to go for it, although she broke down in tears over the situation. Becca and Thomas hit it off after she confessed that she was keeping an open mind about him despite knowing that he was involved in drama during Katie Thurston’s season.

Mari Pepin, for her part, reiterated to Kenny Braasch that she wanted to focus on their relationship, and they agreed that they would leave the beach together right away if it meant assuring each other that it was not about getting roses. They chose to stay, and he broke up with Demi Burnett, who cried because he had sex with her before deciding to go back to Mari.

Scroll through the gallery below to see where the couples stand after the seventh episode: