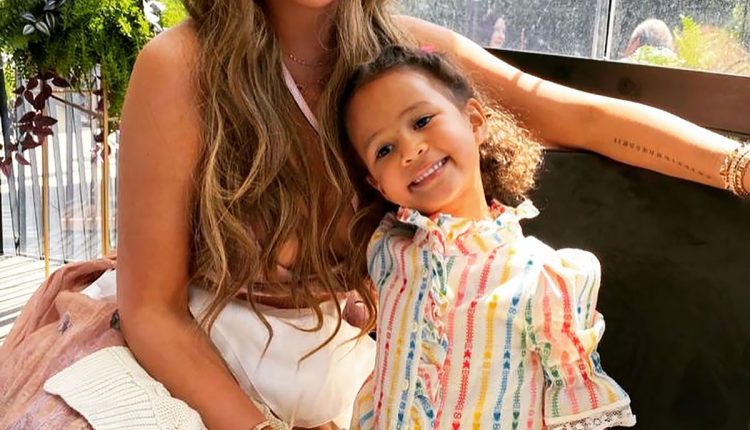 Making it permanent. Hours after returning to social media to issue an apology in response to bullying allegations, Chrissy Teigen took to Instagram once again — this time, to debut some new ink.

To no surprise, her design holds special significance. Not only was the tattoo done on the day of daughter Luna’s preschool graduation, but the butterfly drawing was also created by the 5-year-old, whom she shares with husband John Legend.

“Luna drew this butterfly on me today and it seemed fitting to make permanent. I wanted @winterstone to move and center it, due to issues I also discuss in therapy, but in the end we decided to leave it right where she belonged,” the 35-year-old author wrote in her caption. “A little imperfect, a little messy, but hell she’s here to stay. Lol.”

The design, a hand-drawn butterfly doodle with two spots on each wing and pointy antennas, is positioned on Teigen’s inner arm.

She continued her caption: “Love you all to bits, I really do. Even if you hate me, I can honestly say I do not hate you. I send you love. How annoying is that! You must be soooo annoyed!! Anyhoo, love you, love you, love you. Here’s to the messes in progress.🥂”

The toast to “messes in progress” came after the model posted a lengthy apology on Monday, June 14, in response to bullying accusations from Courtney Stodden.

“Hi all. It has been a VERY humbling few weeks. I know I’ve been quiet, and lord knows you don’t want to hear about me, but I want you to know I’ve been sitting in a hole of deserved global punishment, the ultimate ‘sit here and think about you’ve done.’ Not a day, not a single moment has passed where I haven’t felt the crushing weight of regret for the things I’ve said in the past,” she wrote via Medium. “As you know, a bunch of my old awful (awful, awful) tweets resurfaced. I’m truly ashamed of them. As I look at them and understand the hurt they caused, I have to stop and wonder: How could I have done that?”

In May, Stodden told The Daily Beast that the Cravings author “wouldn’t just publicly tweet about wanting me to take ‘a dirt nap’ but would privately DM me and tell me me to kill myself.”

What Are the ‘Twisties’? Simon Biles Avoided Injury With Olympics Withdraw

LPBW’s Tori Roloff Tearfully Reflects on Finding Out About Miscarriage

Why Kailyn Lowry Is Freezing Her Eggs: ‘I Just Want the Possibility’

Lindsie Chrisley and Will Campbell Split After 9 Years of Marriage

Kelly Clarkson and Brandon Blackstock’s Divorce: Everything We Know

Michael A. Gets Real About the ‘Pain’ of Katie Split:…