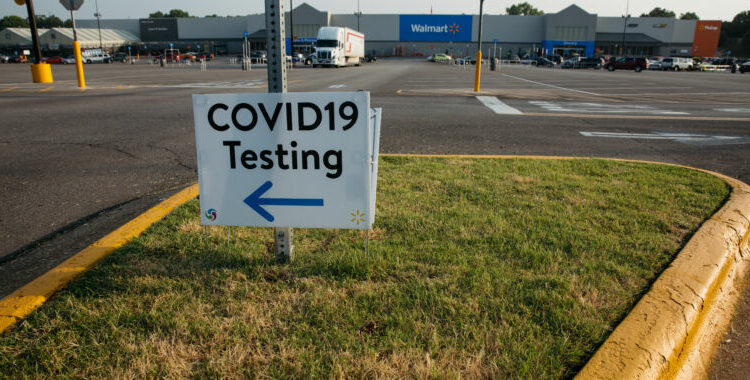 As the delta variant spreads rapidly in Missouri and cases of COVID-19 surge, some hospitals in the state are already strained. And projections suggest things will only get worse in the coming weeks.

Cases have increased 45 percent statewide in the past two weeks, with hospitalizations rising 24 percent, according to data tracking by The New York Times. Numerous counties across the state have high per-capita infection rates, some as high as one in seven residents infected. But many of the counties with the highest daily new cases are clustered in Missouri’s southwest corner.

Taney County, home to the popular tourist town of Branson in southwest Missouri, has seen daily cases increase 50 percent in the last two weeks, with hospitalizations increasing 62 percent. Taney has an average of 52 daily new cases per 100,000 residents, the third-highest daily case rate in the state. North of Taney in the southwestern corner is Dallas County, which has the second-highest average of daily new cases, at 63 per 100,000. Cases there have increased 74 percent in the last two weeks while hospitalizations increased 44 percent.

Dallas sits just north of the city of Springfield, which has been particularly hard hit in recent days. On the Fourth of July, the chief administrative officer at Mercy Hospital in Springfield, tweeted that the hospital had temporarily run out of ventilators due to an influx of COVID-19 case. Currently, the hospital’s intensive care unit was 99 percent full, with only one ICU bed available.

Cox Medical Centers in Springfield are also struggling, with 97 percent of their ICU beds currently filled. Steve Edwards, the president and CEO of CoxHealth, put out a desperate plea on Tuesday for more respiratory therapists. “Springfield, Mo is struggling with surging Covid volumes,” he tweeted, adding that the hospital system’s “heroic” therapists needed reinforcements.

The plea followed an ominous tweet from Edwards on the fourth, in which he noted that the percentage of COVID-19 tests that have turned up positive had risen to 32 percent. “Very concerning!” he tweeted. He also reported that the hospital system had taken in four pediatric COVID-19 patients on Saturday alone, including one baby that was just a few weeks old.

“If you are making wildly disparaging comments about the vaccine, and have no public health expertise, you may be responsible for someone’s death,” he tweeted, adding simply, “Shut up.”

On the same day, top infectious disease expert Anthony Fauci noted that 99.2 percent of COVID-19 deaths in June were in unvaccinated people. “No vaccine is perfect,” Dr. Fauci said during an interview on NBC’s Meet the Press with Chuck Todd. “But when you talk about the avoidability of hospitalization and death, Chuck, it’s really sad and tragic that most all of these are avoidable and preventable.”

Low vaccination rates in Missouri are a critical vulnerability, particularly as the highly transmissible delta variant runs rampant through the state. According to variant-tracking efforts run by researchers at Scripps Research in La Jolla, California, Missouri has the highest prevalence of the delta variant of any state. Based on limited genetic evidence as of June 23, the delta variant made up an estimated 96 percent of daily cases in the Show Me State.

The delta variant, first identified in India, is estimated to be more than twice as infectious as the original strain of the pandemic coronavirus, SARS-CoV-2, that mushroomed out of Wuhan, China. There is also some evidence that suggests the virus may cause more severe cases of COVID-19.

Vaccines are still largely protective against the delta variant—particularly against severe disease, hospitalization, and death from the infection. However, that protection requires people to actually get vaccinated. Missouri’s vaccination rate ranks 37th among states, with only 39 percent of the population fully vaccinated. And the areas now seeing surges have even lower vaccination rates. Taney and Dallas counties, for instance, have just 26 percent and 24 percent of their residents fully vaccinated, respectively.

With the combination of low vaccination rates, the fast spread of the delta variant, and a recent holiday, health workers in the state are bracing for things to get worse in the coming weeks.

“Our projections are only showing us continuing to go up,” Ashley Kimberling Casad, vice president of clinical services at CoxHealth in Springfield, told the Associated Press. “We generally see an increase in hospitalizations about two weeks after big events, so knowing it was the holiday weekend and probably lots of people spent time with family and friends and with our vaccination rates so low, we are going to expect that in two weeks it gets really, really busy.”

Up to 1,500 businesses infected in one of the worst ransomware attacks ever

John Mulaney’s Candid Quotes About Addiction, Recovery Through the Years