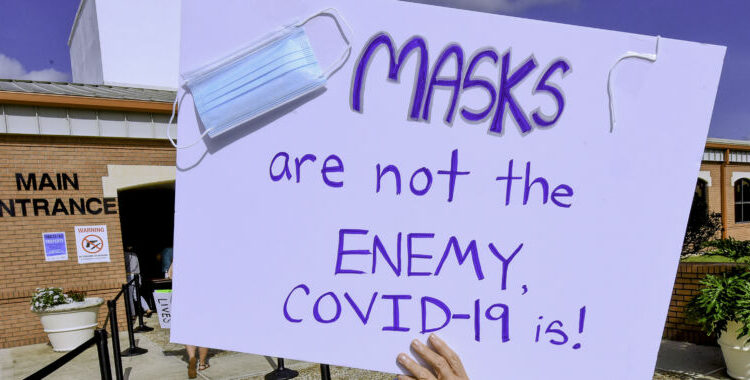 In a notice of appeal filed Thursday, DeSanitis’ lawyers claimed that the appeal should trigger an automatic stay, keeping the governor’s mask mandate ban in place for now until the appeal is heard. However, as CNN reports, parents from six Florida counties have already filed an emergency notice to vacate the stay.

DeSantis’ move to appeal, which was expected, extends the governor’s mindboggling and escalating showdown with parents, school boards, public health guidance, medical experts, and a deadly coronavirus that has shown no interest in philosophical or legal arguments.

DeSantis attempted to bar school mask mandates by issuing an executive order at the end of July. The order hinged on the “parents’ bill of rights” law, which took effect in the state July 1.

Last Friday, Leon County Circuit Judge John Cooper struck down DeSantis’ order, noting that the parents’ bill of rights law allows for policies such as mask mandates if they are “reasonable and necessary to achieve a compelling state interest.” In Cooper’s judgement, school mask mandates would be permissible under the law as long as parents had an avenue to make school boards justify that they are, indeed, “reasonable and necessary.”

Moreover, Cooper concluded that mask mandates do, in fact, appear reasonable and necessary. The evidence presented in the trial “demonstrates that face mask policies that follow CDC guidance are, at this point in time, reasonable and consistent with the best scientific and medical and public opinion guidance at this time,” Cooper concluded during an oral presentation of his ruling.

Since that decision, new data has only bolstered the use of face masks as part of a layered approach to reducing community spread of COVID-19. On September 1, researchers released results from one of the largest high-quality mask studies done to date, finding that surgical masks are effective at reducing the spread of COVID-19. The study, involving more than 340,000 adults in Bangladesh, was led by researchers at Stanford and Yale and posted online as a preprint.

Use of face masks had already been roundly recommended by leading public health and infectious disease experts, particularly for children who are largely unvaccinated. While children have relatively lower risk of severe disease and death from COVID-19, they are still quite capable of becoming ill—even seriously so—and transmitting the virus to peers and adults.

With the surge of the delta coronavirus variant and vaccines still unavailable for children under the age of 12, COVID-19 cases are surging in children nationwide, and pediatric hospitalizations jumped nearly five-fold from late June to mid-August. Children are also making up a larger proportion of overall COVID-19 cases than ever in the pandemic. As the American Academy of Pediatrics notes, children have made up about 15 percent of the total COVID-19 cases since the pandemic began. But their proportion of cases jumped to 22.4 percent in the week ending August 26.

The Centers for Disease Control and Prevention and the American Academy of Pediatrics have both recommended universal masking in schools—for teachers, staff, students, visitors, etc.—regardless of vaccination status.

Masking, vaccinating, and following other public health measures has been particularly critical for Florida, which has seen one of the sharpest and highest surges of COVID-19 among states in recent weeks. The Sunshine State has recently exceeded previous records in new daily cases, hospitalizations, and deaths. It’s now averaging around 20,000 new cases per day, surpassing its peak in January of an average of around 15,000. Deaths are also at an all-time high of around 240 per day. Pediatric hospitalizations have blown past previous records, now averaging about 68 new admissions per day and rising. Most of the new cases and nearly all of the hospitalizations and deaths have been among the unvaccinated. Only 53 percent of Florida’s population is fully vaccinated.

In a letter sent to DeSantis last month, more than 800 doctors blasted the governor for his “reckless” mask-mandate ban and for not doing more to promote vaccines for those who are eligible. “For children ineligible for a vaccine, the only protection they have against COVID-19 is for them to wear a mask, and for those around them to do the same,” the doctors wrote. “What’s heartbreaking and infuriating for us as doctors is watching children needlessly suffer while Gov. DeSantis rejects simple protections such as masks and vaccinations… Enough is enough. Florida needs to mask up, get vaccinated, and have a governor willing to lead.”