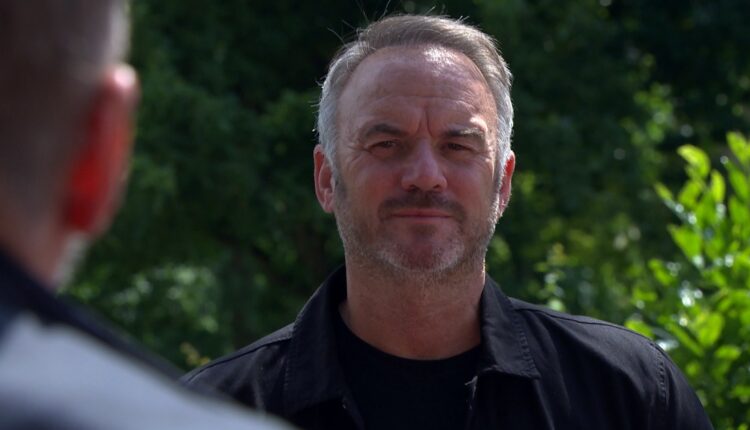 Come on, you must remember him? An ex colleague of Harriet Finch’s (Katherine Down Blyton), he attacked Dawn (Olivia Bromley) and Harriet hit him over the head with a kettle? It was all socially distanced but you couldn’t really tell?

There was a gun siege? No, no that’s Wendy’s ex. Never mind anyway, after many long months, including a body being buried, Harriet living in a cellar then disappearing and now deciding she wants to go into the police force and Will forming a career in events management and occasionally assisting in the faking of deaths, DI Malone is about to come back and haunt them.

Just when you thought that Emmerdale had forgotten that Dawn shot him dead and he’s festering away somewhere. Funny, popular guy like that, you’d think someone would have missed him by now.

Will is throwing all of his efforts into the upcoming survival adventure – which does not have disaster written all over it, despite any pictures you, uhh, may have seen – but when Priya Sharma (Fiona Wade) and Ellis Chapman (Aaron Anthony) move the venue for the site, Will is basically bricking it and for good reason.

It’s near to where Malone is buried and the last thing he needs is for that particular ghost to come back and haunt him. Knowing he has to protect Dawn, he would be prepared to take the fall, but it would be right back to jail for him and for quite a long time.

Kim Tate (Claire King) can sense that something is up – so when Will cracks and admits to her that the site is where the body is buried, she is stunned.

No stranger to a criminal cover up herself, will Kim help him out – or will the serial schemer use this leverage to her advantage?

With tea – or seriously expensive decanted brandy – like this to spill, can Kim resist a cheeky bit of blackmail?