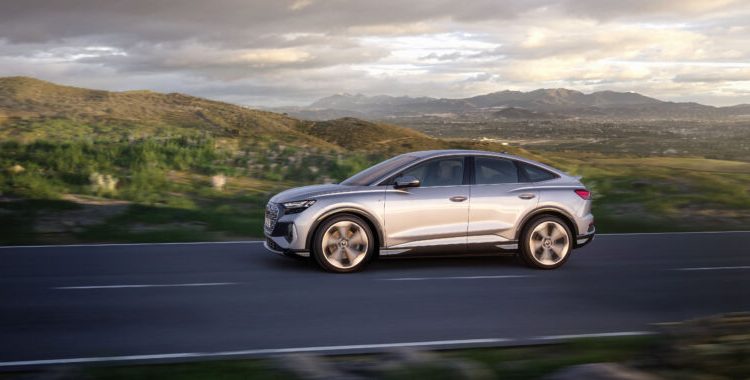 Everything we know about Audi’s next electric crossover, the Q4 e-tron

Although it hasn’t announced plans to give up internal combustion engines completely, the future is definitely an electric one for Audi. In February, the company revealed its third battery electric vehicle, the e-tron GT, which joins the e-tron and e-tron Sportback SUVs in dealerships this summer. And following the svelte e-tron GT by year’s end is a pair of smaller, more affordable crossovers, called the Q4 e-tron and Q4 Sportback e-tron, unveiled online on Wednesday. (And if that’s not enough, we have some news on Audi’s other new BEV platform, but we can’t tell you about that until next week.)

As the name suggests, the Q4 fits in between the brand’s Q3 and Q5 crossovers. Based on its exterior dimensions, it’s only slightly smaller than the Q5, although the benefits of a bespoke BEV platform make for a much more voluminous interior, particularly for those in the back.

If the Q4 looks somewhat familiar—a bit like a Volkswagen ID.4, perhaps—don’t be alarmed. That’s because it uses a new dedicated BEV architecture shared with VW, called MEB (Modularer E-Antriebs-Baukasten or Modular Electrification Toolkit). Therefore, many of the Q4 e-tron and Q4 Sportback e-tron technical specs may come as no surprise.

The Q4 even shares its drag coefficient (Cd) of 0.28 with the ID.4. Audi provided some interesting figures on how various design elements contributed to the Q4’s WLTP (Worldwide Harmonized Light Vehicles Test Procedure) range. For instance, closing the cooling air intake at the bottom of the front bumper added 3.8 miles (6 km). A pre-spoiler mounted where you might find front fog lights added 3.1 miles (5 km). Spoilers ahead of the front wheels—a notoriously turbulent zone and big contributor to a car’s drag—added 8.6 miles (14 km). Bumps on the side mirror surrounds contribute another 1.2 miles (2 km), and an aerodynamic seal on the tailgate contributes 2.5 miles (4 km).

As you might expect, the Sportback is more aerodynamic, with a Cd of 0.26. The sloping rear hatch and its spoiler are good for an extra 16 km of WLTP range compared to the crossover, Audi told us. Official Environmental Protection Agency range estimates won’t arrive until much closer to the Q4s arriving here, but the WLTP ranges are 323 miles (520 km) for the Q4 40 e-tron, 303 miles (488 km) for the Q4 50 e-tron quattro, and 308 miles (497 km) for the Q4 Sportback 50 e-tron quattro. (The WLTP test cycle generates much more optimistic estimates than the EPA’s testing protocol, so expect official US range estimates to be smaller.)

What makes this better than an ID.4?

Although we’re pretty sure the Q4’s driving dynamics will distinguish it from the ID.4, confirmation will have to wait a few more months. We do know that there will be two different levels of suspension upgrade available (although, confusingly, some of these features are standard on the Sportback, others on both quattro variants). The dynamic package adds sports suspension, which lowers the Q4 by 0.6 inches (15 mm); variable-ratio steering; and different drive modes (comfort, efficiency, dynamic, individual, auto). If you want adaptive dampers, those are found in the dynamic package plus.

No such wait is needed to know that the Q4’s cabin marks it out from the more mainstream people’s electric car. It looks typically Audi, which is a good thing, as the brand is one of the few to beat when it comes to a stylish interior. However, there’s a greater use of recycled materials and synthetic fabrics than in conventionally powered Audis.

Compared to the VW, the Audi has more of a center console and locates its drive selector here. It features physical buttons for climate control, audio volume and playback, and more. And if the images in the gallery give you reason to remember the Austin Allegro, fear not—a round steering wheel comes standard; the hexagonal rim is an option.

Two screens—one for the main instrument display and another for the infotainment—are integrated into the dash, unlike in the ID.4. The main instrument display is always a 10.25-inch screen, but there are actually three different grades depending on trim level; the most basic version only displays important information and won’t show you a moving map, for example. And there are two sizes of infotainment screen: a 10.1-inch 1,540×720 as standard or an optional 11.6-inch 1,764×824 display. Regardless of size, the infotainment system runs VW Group’s latest MIB 3, and Audi has partnered with Sonos for the in-car audio experience.

VW Group’s augmented reality heads-up display wasn’t ready in time for VW’s ID.3 launch in Europe last year, but it will show up as an option in the Q4 and Q4 Sportback. I’m excited to try it out to see if the execution lives up to the idea’s promise.

Audi effused about the Q4’s storage compartments in the Q4 press kit and during our briefings on the BEVs. There’s the glove box, plus a compartment in the center console, but everyone seemed most pleased with the bottle holders built into each door, each of which can contain a 1 L bottle. MEB uses space above the front axle to house the car’s climate control system, so there’s no frunk, but the Q4 hatchback has 18.4 cubic feet (520 L) of cargo space when the rear seats are in use and 52.6 (1,490 L) cubic feet with the rear seats folded flat. The Q4 Sportback actually manages a slightly larger 18.9 cubic feet (535 L) when the rear seats are in use but a slightly smaller 51.6 cubic feet (1,460 L) when the seats are folded down.

Pricing information will have to wait until closer to the Q4’s arrival, which is still some months away. For now, Audi told Ars that it expects pricing to be very competitive, and it will start at under $45,000 before rebates. (The price of the cheapest e-tron SUV might reasonably be taken as the price ceiling for a fully loaded Q4 50 e-tron quattro, but I’m just guessing.) We also expect some amount of bundled, free DC fast charging at Electrify America stations, although, again, that information will be confirmed closer to year’s end.

The very common vaccine ingredient at the center of J&J, AstraZeneca drama