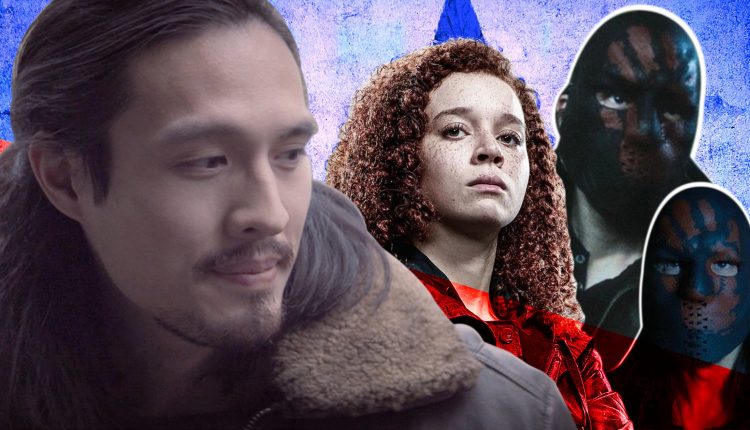 Falcon and Winter Soldier: From karaoke to camaraderie, Marvel’s Desmond Chiam shares what it’s really like being a Flag-Smasher

Warning: major spoilers ahead for episode six of The Falcon and The Winter Soldier.

Over the past six weeks, anti-patriotism group the Flag-Smashers have proven themselves as a formidable opponent to Bucky Barnes (Sebastian Stan) and Sam Wilson (Anthony Mackie) in the MCU’s Falcon and The Winter Soldier, challenging the symbol of Captain America in the aftermath of Avengers: Endgame.

In the high-octane episode six finale, the fate of the Flag-Smashers was revealed, with Karli Morgenthau (Erin Kellyman) dying from gunshot wounds sustained from Sharon Carter (Emily VanCamp), who was unmasked as the Power Broker, and several members of the group killed in an explosion seemingly orchestrated by Baron Helmut Zemo (Daniel Brühl).

During a recent chat with Metro.co.uk, Desmond Chiam, who plays Flag-Smashers member Dovich, spoke about what it was like taking on a Marvel role arguably erring on the more villainous side… while also sharing the fun he and his co-stars got up to while ‘on tour’ in Europe. Backstreet Boys karaoke with the Flag-Smashers – where do we sign up?

Desmond’s connection to Captain America goes way back, with the Australian actor recently sharing in a viral thread how much it meant to him to star in Falcon and The Winter Soldier and take home a piece of Cap’s shield, having been a huge fan of the superhero since childhood.

He told us that the ‘inception of the MCU sort of coincided with my career as an actor’, so there was ‘definitely always that hope’ that he would one day find himself starring within the fantastical cinematic universe.

While auditioning for his part, it wasn’t until later that The Shannara Chronicles star found out for sure that he was going for a role in the Marvel series. When he did, despite his love of Captain America, he was psyched about the prospect of playing an adversary to the protagonists.

‘Hey man, villains have more fun,’ he said. ‘Once we got into it and got a little more of the details about the role, they were like, “Well, you know, they’re superpowered, they take the super serum,” and I was like, “So what Cap took, huh? Okay. Can’t say no at this point!”’

Being on set, Desmond felt ‘energised’ when he saw the practical effects that went into showing off the Flag-Smashers’ super strength, such as trucks being placed on hydraulics to demonstrate the group’s members being able to lift them up.

But aside from the spectacle of it all, the actor felt grateful for the ‘camaraderie’ he shared with his co-stars, particularly his fellow Flag-Smashers.

‘Coming onto set and meeting the Flag-Smashers and seeing that we were all such a diverse bunch was a really nice feeling,’ he recalled.

‘There’s a level of unspoken language that I think anyone who’s a descendant of a migrant community kind of shares and gets that meant that we already had that foundation to our relationship.

‘It was really like, first day, we were in it together. That was really nice. And then to be part of a series that was addressing these systemic problems, it made it really easy to get out of bed and go to work.’

The Reef Break star said that all of the actors who played Flag-Smashers were ‘so lovely’, describing Erin as ‘one of the loveliest people that I’ve ever met on a set working at this level’.

‘And that goes to the rest of them as well, you know, Tyler, Renes, Indya, Dani, Noah, Ness, shout-out to all of them, they didn’t make it feel like we were doing evil,’ he added.

While the Flag-Smashers are introduced as a somewhat villainous entity in the MCU, describing them as such isn’t quite so simple, as Desmond feels that many viewers may understand their ‘ethos’ of helping people who have been displaced after half the universe returned following the five-year Blip.

In Desmond’s opinion, taking the character of the Flag-Smasher Karl Morgenthau from the Marvel comics and transforming it into ‘a worldwide movement’ was a ‘needed update’.

‘There is an element of what we’re doing that isn’t wrong, particularly when you look at say Mama Donya’s ethos, or even Dovich having this visceral response to the violence that Karli’s starting to lean into. There’s only a difference in methodology here,’ he said.

‘Their actual world view is correct. There are people who have been left behind who do need to be lifted out because systemically there’s something that’s going on that’s caused them to stumble.’

Desmond said that while it is fair to question their methods, ‘there’s a lot of people with whom the Flag-Smashers resonate nowadays, because they can look at them and are like, “Yeah, you might not be fighting the right way, but you’re fighting for the right thing”‘.

One of the keys to bringing this across was casting Erin as the group’s leader, ‘because she’s such an empathetic person’, he said.

The Flag-Smashers clearly have a strong bond on screen, something which also translated to real life.

Looking back on his Falcon and The Winter Soldier experience, Desmond said that his most treasured memory was one that involved an international trip… and some nineties music.

‘I think my favourite memory honestly was touching down in an unspecified European location – I can’t say too much about where we filmed – and just exploring with the other Flag-Smashers, because some of them hadn’t been overseas before,’ he recollected.

‘I was so stoked to be hanging around with them. We spent the whole day walking around the city and discovering this place as it were, and it was just so much fun. It was like a little summer camp with a bunch of people who are family that I didn’t even know I had. It was really lovely.

‘For real, the first day, we went out to a karaoke lounge, and we were all singing like Backstreet Boys and Renes was like beatboxing, Tyler was freestyling… so yeah, make a band out of us. Put us on tour.’

Flag-Smashers on tour… we like the sound of that.

The Falcon and The Winter Soldier is available to watch on Disney Plus.