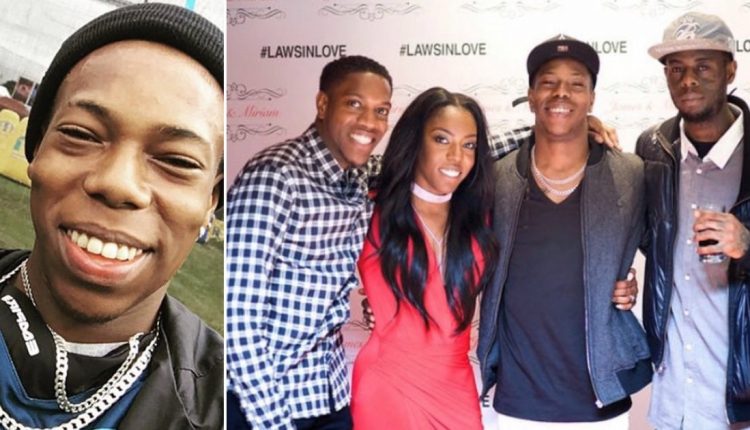 Relatives of a man battling for his life in hospital say they were told they could only see him once each due to coronavirus restrictions.

Ammi Fagan, 23, was rushed into the Royal London Hospital after suddenly suffering a brain haemorrhage on July 5 as a result of an undetected brain aneurysm.

Major brain surgery was performed on him for 7.5 hours to save his life – but he then had a stroke which affected the left side of his body.

‘He was put into a medically induced coma seven weeks ago, and he hasn’t woken up since,’ his sister Miriam, 32, told Metro.co.uk.

‘It was a shock because he’s really active and sporty. He was super healthy and even played paintball for Team Great Britain.

‘He had no health issues prior to this. He’s such a lovely, funny kid.’

She said the family, from Walthamstow, north east London, rushed to the hospital after the operation to hear what had happened to Ammi and what care he now requires. But they didn’t realise it would be the last time the family would all be together at once to support him in hospital.

Ammi has since suffered multiple complications including an infection, and has undergone six more brain operations. A do-not-resuscitate order has also been put in place.

‘But what we’ve found is the hospital has been super inconsistent with visits,’ said Miriam.

‘They said they would let us know because of Covid-19, which we understand, but the visits have been really ad hoc.

‘They at first said nobody’s allowed in hospital, then said we could all visit one day at 3pm but changed their mind and said only mum could go in.’

After consistently requesting a visit, Ammi’s siblings – Miriam and his two brothers, Aaron and David – were eventually told they could visit him once each, but no more due to the pandemic. His mum Grace has only seen him three times.

‘I have not been able to see him, hold him or touch him. That’s what they don’t see, when I’m laying awake thinking at 2am,’ added Miriam.

‘We don’t want to put him or others at risk, of course, but we just think it makes no sense.

‘I cannot understand how the rest of the country is lifting restrictions – promoting eating out to help out, we can go to the cinema – and I can’t visit my brother in hospital.

‘Everything is returning to normal but the economy is the priority and it is totally unfair.

‘It’s an injustice – not just for us but other families who are going through the same thing. It’s inconsistent across the country.

‘I’ve seen reports of celebrities like Katie Price and Kate Garroway visiting their critically ill relatives in hospital during the pandemic. Why can’t we?’

Miriam said awful news has been delivered to the family in inappropriate ways. She was called by a doctor in the middle of a supermarket shop to be told Ammi had really deteriorated, which is information she normally would only be told in a hospital setting.

A Zoom call was also set up where the family distressingly had to watch Ammi suffer a sympathetic storm (a type of fit as a result of brain injury) without being able to offer any comfort.

‘It even says on the NHS website that regular visits from loved ones can stimulate recovery, as familiar sound and touch can encourage patients to wake up,’ Miriam said, ‘Yet they are prohibiting us from contributing to his care.’

She stressed the family does not feel the hospital staff are to blame – but the procedure in place around it, which she feels needs to be standardised to give relief to distressed families.

‘The doctors, surgeons and nurses have been fantastic, and I know without a shadow of a doubt he would no longer be here if it wasn’t for their help. We are very grateful for every single thing they have done,’ she added.

Miriam and her family launched a social media campaign – and since a petition – calling for relatives to be permitted to visit critical patients, after hearing from a number of other people across the country in a similar situation.

She has also applied to the courts for a deputyship to allow her to make medical decisions on behalf of Ammi.

A spokesperson for Barts Health NHS Trust said: ‘We understand having family in hospital can be distressing and we work closely with families to ease their concerns.

‘To ensure the safety of our patients and staff, we are only allowing visitors into our hospitals in exceptional circumstances. In certain cases, we are allowing one person to visit at a time and some wards have further restrictions in place such as time limitations.

‘We are continually reviewing our visitor guidance to ensure our staff, patients and visitors are kept as safe as possible during this pandemic.’

They added virtual visiting and a family contact centre has been set up to help ease the distress for families with a loved one in hospital.