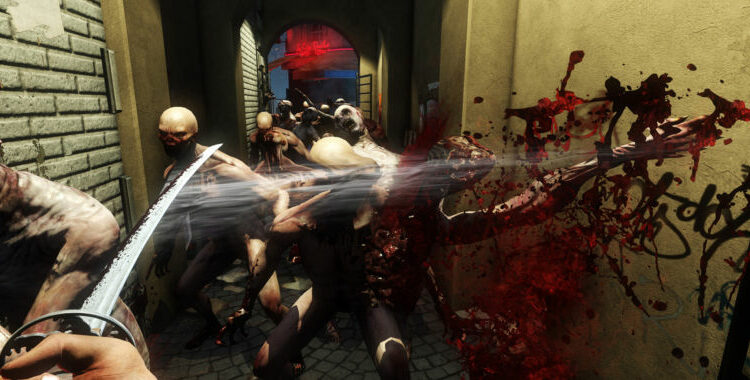 Tripwire Interactive, the Georgia-based studio and publisher responsible for games like Maneater, Chivalry 2, and the Killing Floor series, confirmed Monday that CEO John Gibson has been replaced by Vice President Alan Wilson, who will lead the company as it searches for a new head executive.

“The comments given by John Gibson are of his own opinion and do not reflect those of Tripwire Interactive as a company,” the developer said in a statement. “His comments disregarded the values of our whole team, our partners, and much of our broader community. Our leadership team at Tripwire are deeply sorry and are unified in our commitment to take swift action and to foster a more positive environment.”

It’s unclear whether Gibson, the company’s co-owner, will keep his holdings in Tripwire following his ouster. Representatives for Tripwire did not immediately respond to Ars Technica’s questions.

Gibson tweeted on September 4 that he was “proud” of the US Supreme Court for allowing a law that bans abortions at six weeks and lets private citizens sue anyone they believe is aiding women with such a procedure in any way. The former studio head also described himself as being a “pro-life developer.” The response to Gibson’s tweet was swift across the game industry, from both fans and game-development peers. One high-profile response to Gibson came from God of War director Cory Barlog, who replied, “How can anyone be proud of claiming dominion over a woman’s personal freedoms?”

Shipwright Studios, a contract developer that worked with Tripwire on Maneater and Chivalry 2, cut ties with the company. “While your politics are your own, the moment you make them a matter of public discourse, you entangle all of those working for and with you,” the studio replied to Gibson in a tweeted statement. “We cannot in good conscience continue to work with Tripwire under the current leadership structure.” Shipwright has not commented on whether its relationship with Tripwire may change after the shakeup, though the contractor did retweet Tripwire’s announcement regarding Gibson.

Torn Banner Studios, the developer of the Tripwire-published Chivalry 2, followed with its own tweet distancing itself from Gibson’s Friday statement. “This perspective is not shared by our team, nor is it reflected in the games we create,” the studio wrote. “The statement stands in opposition to what we believe about women’s rights.” Gibson’s account appears to have been inactive since September 5, and his Twitter bio has yet to be updated to reflect his current employment status.

Gibson has a track record of expressing his Christian faith in and around Tripwire’s games, dating back to the original 2005 mod version of Killing Floor. After one of the female monsters in the mod appeared unclothed, Gibson wanted the monster covered up, he said in a 2016 interview.

In the same interview, Gibson said that adding his Christian faith to Tripwire’s games has often been a polarizing flashpoint: “The political and social environment right now is not friendly to Christians. That can be a challenge, not so much because of fans but because of other developers in the industry. Christians get a pretty bad rap right now. You hear things like, ‘We hate everyone,’ etc.”

For Killing Floor 2, a gory, Left 4 Dead-style first-person shooter, Gibson even included the song “Disunion Reconstructed” by his own Christian metal band Dirge. The song features aggressive lyrics about topics like “fetuses” and “mentioning Christ on the job.” (Notably, Killing Floor 2‘s options include a toggle to enable or disable sung lyrics in the soundtrack, with the default set to “disabled.”)

“[It] may surprise a lot of people with it being such a violent game, such a gory game, that there is any kind of, you know, Christian behind the studio that created the game,” Gibson said in the 2016 interview. “But if you look back through the history of the Bible, there is a lot of violence in there.”

In a similar example of a game studio’s lead responding to public blowback, Five Nights at Freddy‘s creator Scott Cawthon left game development for good in June amid criticism over donations he made to various conservative, anti-LGBTQ campaigns, including Donald Trump’s and Mitch McConnell’s.

“I’m a Republican. I’m a Christian. I’m pro-life. I believe in God. I also believe in equality, and in science, and in common sense,” Cawthon said in a Reddit post attempting to address the controversy. “Despite what some may say, all of those things can go together. That’s not an apology or promise to change. It’s the way it’s always been.”

Cawthon obliquely addressed the public backlash in his retirement statement, saying, “I have been shown tremendous love and support over this last week, a lot of which has come from the LGBTQ community.”