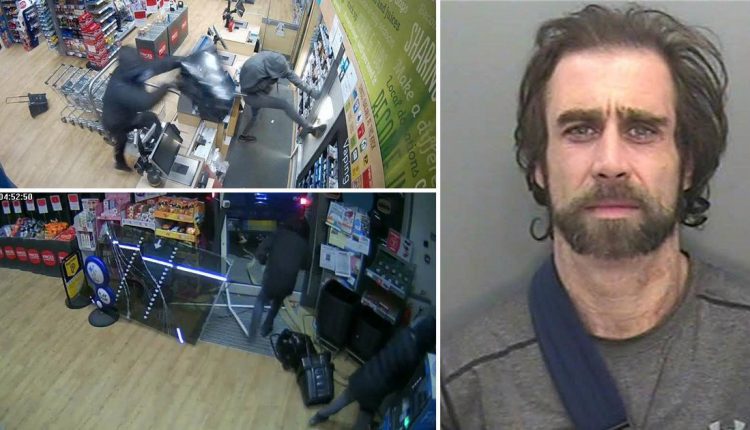 A gang of ram raiders caused thousands of pounds worth of damage in a botched attempt to rip a cash machine out of a village shop.

Four masked men stole a 4×4 and some heavy-duty slings before heading to a Co-Op near Bude, in Cornwall, where they tried to wrest the ATM out of the wall in the early hours of June 28, 2019.

The failed attempt was caught on camera in a video released by police after one of the gang members Anthony Cahill, 35, was jailed for four years.

Cahill, of Kirkby in Liverpool, admitted conspiracy to commit burglary but his three accomplices remain at large and detectives are appealing for information.

Truro Crown Court heard Cahill was one of a criminal quartet who travelled from Liverpool to Devon to embark on the well-planned burglary spree.

They first broke into a crane hire company’s compound on the Roundswell industrial estate in Barnstaple and took several heavy-duty slings that were locked away on the site.

The gang then made their way to a car dealership on the outskirts of Holsworthy, gained entry to its garage and took the keys to a Ford Ranger pick-up and a VW Golf.

Detectives quickly linked all three burglaries and, through CCTV, forensics and the recovery of items, were able to identify potential suspects.

Cahill was located and arrested in Liverpool and initially denied all knowledge of the crimes when interviewed.

Three other suspects were arrested in connection with the burglaries but were released without charge.

Speaking after the sentencing on Thursday, Detective Constable Andrew Colley said: ‘This was clearly a well-organised and maliciously-planned crime.

‘The culprits researched the locations and the layout of each, identifying what they needed in order to remove the ATM from Kilkhampton, and took various precautions to avoid detection and identification.

‘The group caused significant losses and disruption to a local business.

‘I would like to take this opportunity to reach out to anyone who may hold vital information in bring the remaining three suspects to justice.

‘Devon and Cornwall Police will always deal robustly with those who mistakenly believe that our area is an easy target for such offending.’