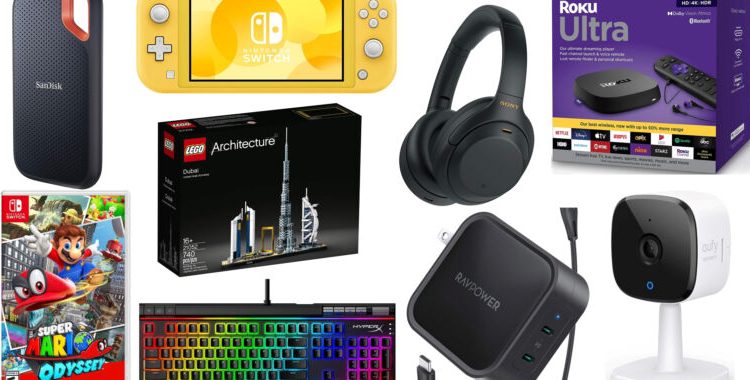 Today’s Dealmaster is headlined by a notable deal on the Nintendo Switch Lite. As of this writing, those who purchase Nintendo’s portable game console at its usual MSRP of $199 can receive another $20 in-store credit at no extra cost.

At GameStop and Best Buy, this comes in the form of an e-gift card that will be emailed to you after your purchase. At Amazon, you’ll have to use the code “8RLOZI4Z5INC” to redeem a $20 promotional credit, either at checkout or through a drop-down on the Switch Lite’s product page. Amazon will then apply the credit to your account within seven days. Just note that Amazon’s terms and conditions say the credit will expire 60 days after it’s been applied, so you’ll want to spend it shortly after taking advantage of the deal. Either way, this is a good opportunity for those who have been interested in the console to pick up a nifty bonus along the way, as traditional discounts on the Switch Lite have been exceedingly rare since the device launched in late 2019.

As a refresher, the Switch Lite is the lighter and more portable version of Nintendo’s ultrapopular game machine. It offers a 5.5-inch display compared to the standard Switch’s 6.2-inch panel and weighs about 30 percent less. The main functional difference is that it’s an entirely portable machine—its “Joy-Con” controllers aren’t detachable, it doesn’t have a kickstand or vibration motor, and it can’t be docked up to a TV or monitor. The smaller size means it loses a little bit of battery life compared to the latest model of the normal Switch, too—about 3-7 hours here, compared to 4.5-9 hours on the bigger model. But the rest of its internal hardware is virtually identical to the regular Switch, meaning it can play the same library of games with no drop in performance (games that require a detached Joy-Con to be played notwithstanding).

Beyond that, the Lite’s display has the same 720p resolution as before, it adds a genuine d-pad (which is far more comfortable), and its face buttons are softer and less noisy. Most notably, the whole thing runs $100 cheaper than the larger model. All told, Ars’ Senior Gaming Editor Kyle Orland called the Switch Lite the “best portable system Nintendo has ever made” in our launch review, so if you don’t plan on using the Switch on your TV, want to save some cash, and aren’t waiting to see what Nintendo’s rumored “Switch Pro” model will look like, it’s a worthwhile purchase.

If you aren’t looking to buy a new Switch, though, we also have deals on our top pick among wireless noise-canceling headphones, excellent indoor security cameras and gaming headsets for those on a budget, Roku’s latest high-end media streamer, Lego kits, and much more. You can take a look at our full roundup below.

Note: Ars Technica may earn compensation for sales from links on this post through affiliate programs.

The Dealmaster has launched its very own newsletter! Sign up to receive a shorter, tightly curated list of the very best tech deals on the Web—no nonsense, direct to your inbox, and often before they make it to the Ars homepage.

Many Republicans are refusing COVID vaccines. Experts are trying to change that