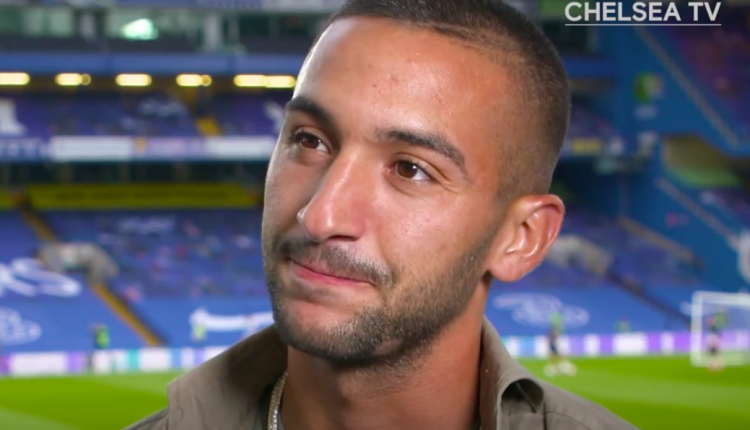 Hakim Ziyech is confident he can bring his own style to English football despite the warnings he’s received about playing in the Premier League and has vowed to do ‘everything in his power’ to bring ‘happiness’ to Chelsea fans.

The Blues agreed a £37million deal with Ajax for Ziyech back in February and the 27-year-old attacker officially joined the club on July 1, along with Leipzig striker Timo Werner.

The Morocco international was pictured in individual training for the first time at Cobham at the weekend and watched on in the stands at Stamford Bridge on Tuesday evening as Frank Lampard’s side boosted their top-four chances with a 1-0 victory over lowly Norwich.

Ziyech caught up with his new team-mates in the dressing room after the win and held an interview with Chelsea’s official website prior to kick-off in which he expressed how excited he was to get started in west London.

‘When you are a young guy you always want to play for a big club, in the Premier League of course,’ he told Chelsea TV.

‘When I was young, the players that played here, it was always a big club so I am very happy and it means a lot. I was playing in the youth in Heerenveen and here was playing [Didier] Drogba, Lampard, [John] Terry, all those big names.

‘We were always for Chelsea, and if you look at now, if you can play here it means a lot to me.’

On the significance Lampard’s presence had in his decision to join Chelsea, Ziyech said: ‘It was important in my decision of course.

‘I always said that I like the style of playing that he’s using now and the attacking play was for me a big part of my decision to come to Chelsea.’

Ziyech is ready for the physical challenges that come with playing in the Premier League and says his intellect on the football pitch makes up for his small stature.

‘I would love to bring my style of play that I have shown the last few years with Ajax,’ he continued.

‘Just keeping the same style and hopefully they will enjoy it and of course I hope to help the team as much as possible.

‘People always tell me the Premier League is a tough competition. Of course I know it is but I think they always said, “you’re physically not ready” and stuff like that.

‘But if you see the competition and how many people have the same body like me, football is just playing with your head, being smart and creating spaces and it’s always in the small things.’

Asked whether he had a message for Chelsea supporters, the ex-Ajax star added: ‘I cannot wait to play here and I’m excited.

‘For me, it’s not fast enough to begin.

‘I wait a long time for this moment, four or five months, but it’s finally here and I will do everything in my power to make everybody happy.’