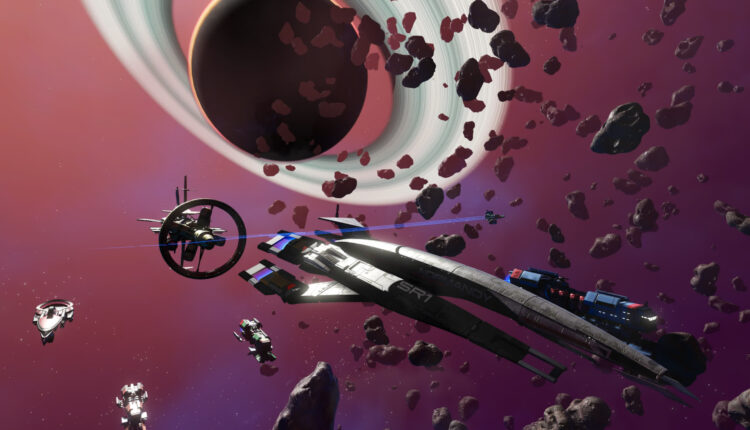 Surprise! The second season of No Man’s Sky Expeditions is underway, and players have been juggling between running the latest mission and putting in time on the Mass Effect remake, which released about the same time. Little did players know there was a huge crossover surprise coming, which players just started discovering today.

In April, Hello Games introduced a new mode of gameplay to No Man’s Sky called Expeditions. The first expedition, dubbed Pioneers, rewarded travelers with a golden starfighter to add to their livery and a new backpack design. Earlier this week, No Man’s Sky travelers started their second expedition, called Beachhead.

On Friday, players discovered a jaw-dropping Easter egg as the legendary SSV Normandy SR1 from Mass Effect warped in from deep space (video above). The crossover, which NMS referred to as a “Universal Boundary Failure,” was a completely unexpected event, timed in coordination with EA and Bioware to celebrate the release of Mass Effect Legendary Edition.

What made the discovery even more exciting is that travelers can add the Normandy to their fleet of frigates. The Normandy is an S-class frigate with the unique designation of “Deep Scout Prototype.” It follows Mass Effect lore in that its stats lean toward combat and exploration thanks to its Mass Accelerator Cannon and Tantalus Drive.

Don’t expect to be handed the Normandy without any effort, though. As with the Golden Alpha Vector from the first expedition, the Normandy must be earned by completing the entire mission and achieving all the patches, which takes time, patience, puzzle-solving, and a bit of grinding.

The Pioneers expedition was a four-week journey, which I completed with about four days to spare. Beachhead is a two-week expedition and is almost half over. It ends on May 31. If you hurry, you might still be able to grind it out before the deadline.

Microsoft is adding dark mode to Office for Android