To celebrate/show off its first-ever all-electric vehicle, the 2020 Taycan, Porsche invited the world’s motoring press to Scandinavia last week to begin an 18-day, 6,440-km odyssey that would cover nine countries between Oslo, Norway and Stuttgart, Germany.

I had the privilege of being among the first group of journalists on the first leg between Oslo and Gothenburg, which included a lunch stop at an Ionity charging station in Strömstad, Sweden, 20-kilometres south of the border between the two countries. The first two models in the all-wheel-drive Taycan fleet are the Turbo and Turbo S, with less powerful variants expected sometime next year and a Cross Turismo by the end of next year. My tester was the Turbo S.

The drive route was a good mix of urban roads, twisty country lanes and major highways, each of which demonstrated different attributes of the Taycan (pronounced ‘Tie-Con’).

Sitting in the driver’s seat, it was immediately apparent that as much design work and engineering had gone into the cabin ergonomics and aesthetics as had into the much-hyped electric powertrain system. The well-bolstered seating position and the way the meaty sport steering wheel met my eager hands felt almost identical to a contemporary 911 cockpit. This, along with the equally 911-ish silhouette of the Taycan, softened my internal criticism of Taycan press material I’d read before the drive that kept referring to the sedan as a ‘sports car.’ Strapped into the driver’s seat, you’d be hard pressed to think you’re in a four-door. And unlike a 911’s rear seats that don’t accommodate anyone over five-feet tall (and even then if they are a contortionist), the Taycan’s rear seats fit a six-footer in comfort and sporty style. Likewise, the sedan’s trunk is a very good size (366 litres), and there’s even room for a couple of backpacks under the hood up front (81 litres).

Although the power button located on the dash to the left of the steering column is the same as the key ignition on Porsches since, well, forever, all Taycan comparisons to Porsche sports cars’ cockpits begin and end with the seating position, as the entire dash/gauge/switchgear layout of the sedan is all new, and according to Porsche, intended to bring its products “into the digital age.”

With a central 10.9-inch infotainment display, an optional passenger 10.9-inch infotainment display and a floating centre console screen controlling things like climate functions, the Taycan’s dash feels very digital age indeed, the dashboard-mounted clock the only analog throwback in sight. However, it’s not overwhelming, which is often the case with multi-screened displays. Likewise, steering-wheel controls are kept to a minimum, limited to just audio/phone controls, a drive mode dial and a regeneration button. 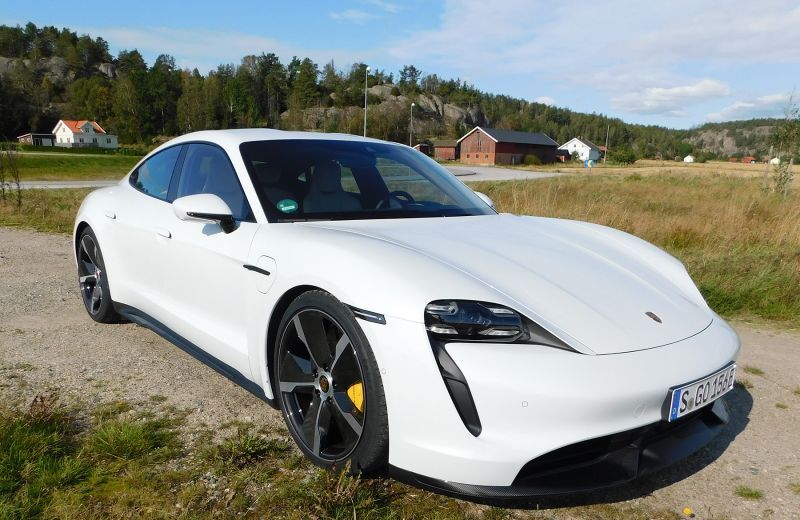 With a push of that aforementioned start button, the Taycan Turbo S comes to life (not with a roar but a whisper). To put the car in gear you flip a unique toggle switch located on the dash to the right of the steering column; down for drive, up for reverse.

The initial driving impressions in Oslo weren’t that much different from your garden-variety EV navigating city streets in morning rush hour. The acceleration was crisp, the cabin quiet and the ride silky smooth. However, when city streets gave way to country roads and with it opportunities to push the sport sedan into and through tight corners and up and over rolling tarmac, the Taycan revealed its unmistakably Porsche personality. Again, I was reminded of the press kit description, and again I understood and accepted the Taycan Turbo S as a ‘sports car’.

The driving dynamics technological features of the Taycan Turbo S are extensive, innovative and include some industry firsts, and all have a profound impact on the performance and handling of this vehicle (for a deep dive on the technical specs, see David Booth’s thorough and definitive First Look of the Taycan).

After an hour or so of running hills and dales through pristine Norway countryside and along waterways we met up with a highway that would take us to the Norway-Sweden border then onto the lunch stop. My co-driver was now at the wheel as we silently spirited along the motorway at 137 km/h, wind noise at a minimum and the experience not unlike that of sitting on a very comfortable high-speed train. 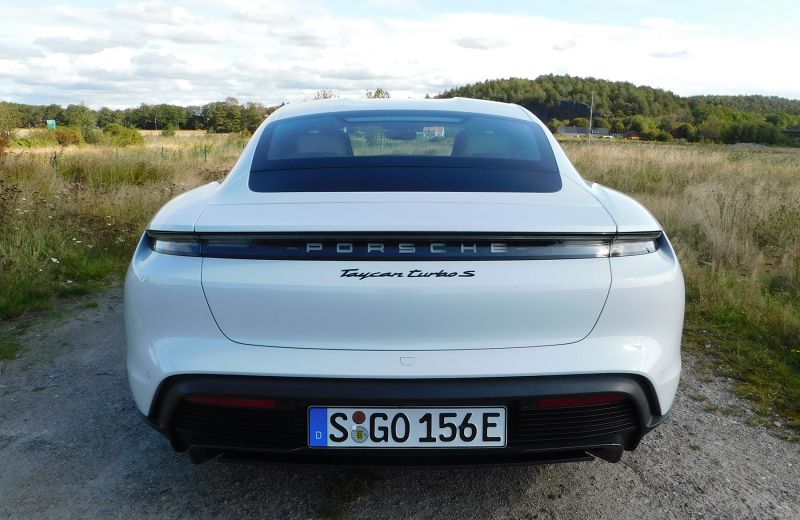 With a Euro-spec full-charge range of over 400 kilometres, we could have easily made the Oslo to Gothenburg drive without stopping had we kept to major roadways, but where’s the fun in that, so at our lunch stop we plugged into an Ionity charging station in Strömstad. With 47 per cent left on our battery, it took just 18 minutes using the DC charger to fill us up to 80 per cent thanks to charging rates of up to 258 kW being recorded. In other words, quicker than the time it took us to have a quick lunch and restroom break.

Just as the morning drive portion demonstrated the exceptional performance and handling of Porsche’s first all-electric vehicle, the lunch stop underscored the real-world potential of a high-speed charging network. Those attributes were not lost on my colleagues, with most of the lunch talk revolving around the unabashed ‘Porsche-ness’ of the Taycans.

Pulling out of the charging station and back onto the highway we settled into the 90-minute blast to Gothenburg, a journey unlike the morning’s but just as revealing in terms of demonstrating the Taycan’s strengths. In this case, that it’s as much a grand tourer as it is a sports car. Unlike so many high-priced performance cars (translation: supercars) the Taycan’s cabin is a very tranquil and comfortable place to be, the kind of place you don’t mind spending hours in. There’s no piston-banging dirge shaking your bones and brainbox. The Taycan’s supple yet stiff chassis — complete with air suspension — smooths out the bumps in the road, as opposed to accentuating them. And the sensible seating positions keep those supercar muscle cramps at bay.

Of course, the Taycan Turbo S has a sticker price of $213,900 (before tax), so one would, and should, expect an exceptional vehicle and one worthy of the Porsche badge. Those fortunate Canadians who will take delivery of one in the first half of next year won’t be disappointed.

Finally, is it a better, more desirable luxury sport EV than the top-of-the-line Tesla Model S? It is. No question. After all, it’s a Porsche.

Why is NASA Going Back to the Moon?