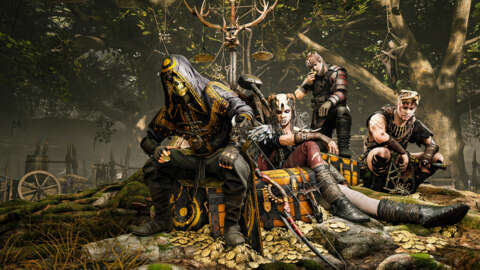 Hood: Outlaws & Legends launched in May with a unique PvPvE model, but is now getting a more traditional PvE game mode for the first time. The new mode called “State Heist” sets teams of four players against a deadlier computer-controlled enemy than those they’ve faced before, with players encouraged to take a stealthy approach to this heist.

The mode introduces new mechanics including limitations on respawning, with the emphasis on creating a game mode that rewards a cooperative and methodical approach. While the game’s regular mode sees two teams of four players facing off against each other, State Heist only requires one team of four to play.

The new mode has launched with an in-game event that’ll award players with unique skins if they manage to complete a State Heist without dying. The Shadow Lords costumes will be unlocked for the character used to complete the challenge, with dedicated players able to unlock all the skins.

Hood: Outlaws & Legends has unfortunately seen a steep drop-off in player numbers since it launched in May, with Steam Charts showing an average concurrent player count of just 67 in the last 30 days. The developers are no doubt hoping the new game mode will bring more players to the game, along with the launch of Hood’s very first season Samhain, which is due out soon.