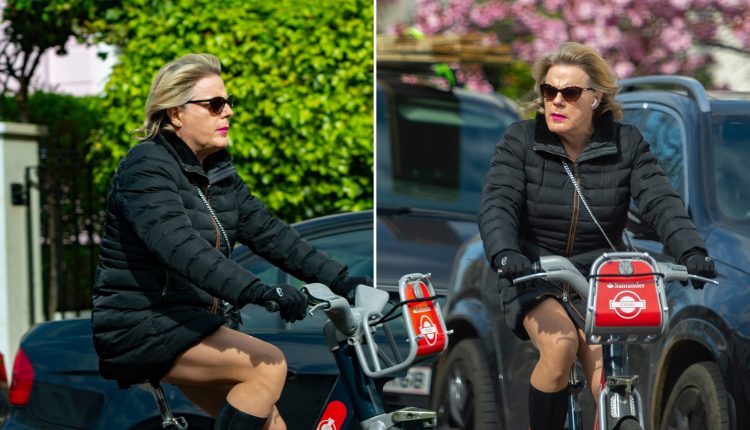 In the words of Ted Hastings, we’re interested in one thing and one thing only: how Eddie Izzard manages to make cycling on a Boris Bike look so damn glam?

The comedian took the eco-friendly route when she hopped on a trusty Santander cycle to get about the streets of London, somehow making it look like it was absolutely nothing as she peddled away in a pair of stiletto boots.

Honestly, when we’re wearing trainers and tights those beasts of a bike are hard to manouvre, let alone while rocking a miniskirt.

Eddie – who confirmed their pronouns recently as she/her – was photographed zooming through the streets with her hair whipping back like she was in some Pantene commercial, with a slick of red lipstick just giving it that boost of je ne sais quoi we’re quite clearly fawning over right now.

If you’ll give us a moment, we’ll just be over here trying to amp up our morning commute game.

Frankly, one shouldn’t be so shocked Eddie made cycling look like such a glamorous cinch, seeing as she recently completed 32 marathons on a treadmill in nearly as many days to raise funds for charity Make Humanity Great Again.

It comes as the 58-year-old comedian – who was praised by viewers in December when she requested the use of ‘she’ and ‘her’ pronouns on Sky Arts Portrait Artist of the Year – opened up on being gender-fluid and how ‘language can change’ as time goes on.

Appearing on the Life, Interrupted podcast, she told Simon Thomas: ‘Your biological body [can give] different signals as to how it is in the brain, but I do feel gender fluid – I have got boy genetics and girl genetics, so I call it boy mode and girl mode.

‘These may not be great phrases but I can’t think of better words. Man mode and woman mode doesn’t sound good so I’m going with those at the moment, but language can change over the years.

‘I am gender fluid, I do seem to be a mixture, but I’m now based in girl mode as a trans woman. And now that pronouns have come out [it] feels like a promotion, I’m very happy with that.’

‘I was asked, I was on the National Portrait Gallery Artist of the Year. And they said, “What would you like to be known as?” So I thought, “Well, I’d quite like to be she because I’m in girl mode, she/her.”’

‘But basically, it’s a request, it’s never demanded, it’s never insisted,’ she explained. ‘Some people twist that, and some people get het up about it.’