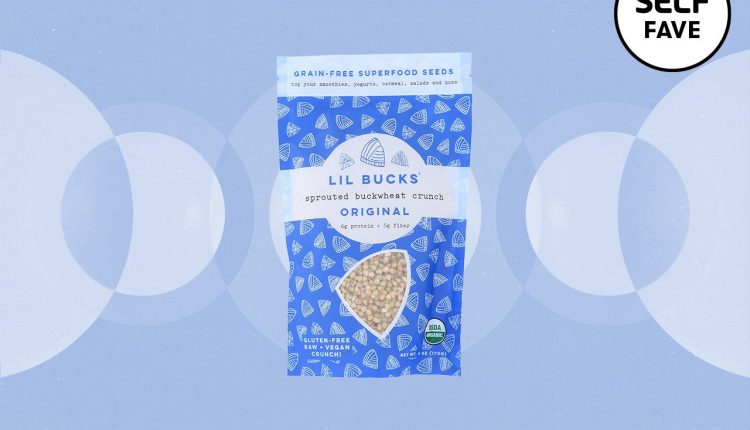 All products featured on SELF are independently selected by our editors. However, when you buy something through our retail links, we may earn an affiliate commission.

Remember that hot sauce commercial with the grandma that says, “I put that shit on everything”? That’s me, only instead of hot sauce, it’s sprouted buckwheat seeds. I love to add a crunch factor to most foods with soft textures. A bowl of creamy yogurt without something to munch on? Unthinkable. While granola and nuts could sometimes do the trick, I frequently have my food commandeered by a toddler, so I need to make sure that it’s safe for her to ingest. Imagine my excitement when I heard about these tiny sprouted buckwheat seeds by Lil Bucks.

Lil Bucks is the brainchild of founder Emily Griffith, a former digital designer who tasted a “life-changing” buckwheat-enhanced açai bowl while visiting Australia and grew smitten with the crunchy sustainably grown seeds. She saw a gap in the health food industry in the States for buckwheat and founded the company in 2018; it sells sprouted buckwheat seeds in four flavor options: cinnamon, cacao, matcha, and original.

Believe it or not, there’s no real wheat in buckwheat (tricky, tricky). It’s actually a seed and therefore naturally gluten-free. You’ll find buckwheat flour in products like soba noodles and hot cereals. Lil Bucks sprouts the buckwheat groats (hulled seeds), which brings out the antioxidants and makes them digestible, and then dehydrates them for extra crunch before adding ingredients like cinnamon or cacao for flavor.

While buckwheat seeds add that oh-so-important crunch factor, they’re also nutrition powerhouses. “Buckwheat is a great source of fiber, which is important because it will help people feel fuller longer,” Lauren Manaker, M.S., RDN, a registered dietitian in Charleston, South Carolina, tells SELF. “If you’re adding the Lil Bucks, or any buckwheat, to your meal, it’s going to help keep you satisfied for longer and in turn it can help you eat less throughout the day.”

These little seeds are also great for people who have a plant-forward diet because they’re high in protein (a quarter-cup serving of the original flavor contains five grams of protein). “Buckwheat is pretty heavy in carbs, but it’s considered a whole grain. It won’t raise your blood sugars rapidly. And because it’s whole-grain, it’s rich in antioxidants as well,” Manaker says.

When I make a salad of soft baby lettuces, I toss on some of the “Original” Lil Bucks. They add a slightly nutty flavor along with a crispy texture, and suddenly I don’t feel like I’m grazing in a pasture. Overnight oats become much more enjoyable with a healthy sprinkle of the cacao-flavored seeds for a chocolatey hint. I appreciate their mini size when I prepare my two-year-old’s yogurt bowls for lunch too. She mostly eats tortilla chips and macaroni and cheese, so when I make a bowl of plain yogurt and banana, I make sure to throw on some of the cinnamon-flavored seeds for that fiber oomph.

Putting nutrition aside, I just love how every meal topped with Lil Bucks becomes a little more fun. Look, I need all the joy I can get right now, and if I can find it in a bag of sprouted buckwheat seeds while also getting a nutrition boost, all the better.