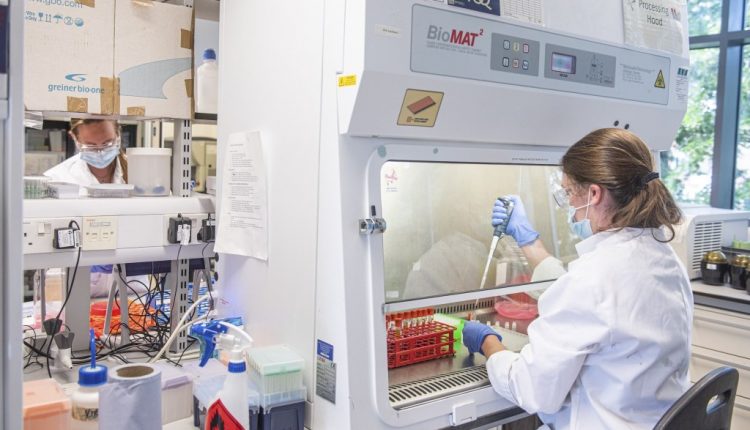 LONDON — British scientists are beginning a small study comparing how two experimental coronavirus vaccines might work when they are inhaled by people instead of being injected.

In a statement on Monday, researchers at Imperial College London and Oxford University said a trial involving 30 people would test vaccines developed by both institutions when participants inhale the droplets in their mouths, which would directly target their respiratory systems.

Larger studies of the Imperial and Oxford vaccine are already underway, but this study aims to see if the vaccines might be more effective if they are inhaled.

“We have evidence that delivering influenza vaccines via a nasal spray can protect people against flu as well as help to reduce the transmission of the disease,” said Dr. Chris Chiu of Imperial, who is leading the research. He suggested that might also be the case with COVID-19.

“It is critical we explore whether targeting the airways directly can provide an effective response compared to a vaccine injected into the muscle,” Chiu said in a statement.

The study is currently recruiting participants aged 18 to 55 and hopes to begin vaccinating people in London in the coming weeks.

Previous studies have shown vaccines delivered by inhalation require lower doses than by injection, which might help stretch limited supplies.

“It may well be that one group has the right vaccine but the wrong delivery method, and only trials such as this will be able to tell us that,” said Robin Shattock, who is leading the development of Imperial’s vaccine.

The Imperial vaccine uses synthetic strands of genetic code based on the virus. Once injected into the muscle, the body’s own cells are instructed to make copies of a spiky protein on the coronavirus. That is expected to trigger in turn an immune response so the body can fight off any future COVID-19 infection.

In comparison, Oxford’s vaccine uses a harmless virus — a chimpanzee cold virus, engineered so it can’t spread — to carry the coronavirus’ spike protein into the body, which should trigger an immune response.

Last week, Oxford temporarily paused its large-scale vaccination tests after one participant in the U.K. reported severe neurological symptoms; it was restarted on Sunday.