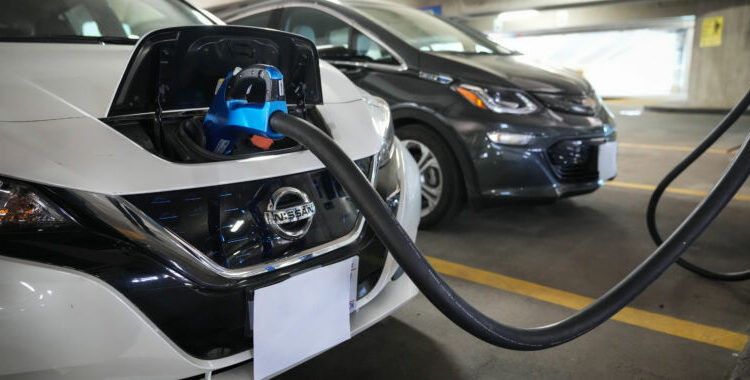 State agencies have to create a market-development strategy by end of 2022.

New York will ban the sale of fossil fuel vehicles starting in 2035 and require all new cars to produce zero emissions. The new law, signed by Democratic Gov. Kathy Hochul last week, will help slash the state’s carbon pollution by 35 percent. It would put New York well on its way to achieving its statewide carbon reduction goals of 85 percent below 1990 levels.

While the sunset date is in line with other plans from the state government, hitting the goal will still require significant planning and coordination. Though electric vehicles aren’t uncommon in New York, the state is effectively starting from zero—around 1 percent of new vehicles sold in the Empire State are fully electric.

The new law doesn’t stop at passenger vehicles. It also requires zero emissions for off-road vehicles and equipment by 2035 and for medium- and heavy-duty vehicles by 2045. There’s some wiggle room with these mandates should batteries or fuel cells for large trucks or construction equipment lag significantly. The law says zero emissions will only be required “where feasible.”

With 14 years before the mandate kicks in, there’s plenty of time to work out the kinks. Still, the state legislature didn’t want to leave things to chance. The law requires various state agencies to coordinate to produce a market-development strategy by the end of next year. The strategy will also have to consider how to support the market for both new and used EVs, which should help address some concerns about affordability.

New York will most likely have the new vehicle market on its side. BloombergNEF forecasts that battery electric vehicles will reach price parity with fossil fuel vehicles in 2022 for passenger cars and in 2024 for trucks and SUVs. (Fuel cell vehicles would also qualify, but so far, those sales amount to a rounding error.)

Convincing the public to buy EVs requires more than just incentives, of course. For many people, charging remains a hurdle in either a physical or psychological sense (or both). The state will have to roll out a significant fast-charging network to facilitate long-distance travel, and it will have to encourage cities to install slower, level-2 charging infrastructure to allow renters and condo dwellers to charge. Such a network would include the usual places, like grocery stores and shopping malls, but also streets and parking garages.

Curbside charging would be especially important in New York City, where on-street parking is the rule rather than the exception. By 2050, the city predicts it will need 800,000 level-2 chargers and 60,000 fast chargers. And given that the Big Apple is home to over 40 percent of the state’s population, solving that problem is likely on the top of state agencies’ lists.

New York City has already begun experimenting with curbside charging, installing 120 chargers that EV owners can pay to use by the hour. The initial installations were sited based on projected demand, community input, and geographic diversity. Business owners can request that a charger be installed in front of their building, too. Parking spaces in front of the EV service equipment are reserved for actively charging vehicles. Cars not charging can be ticketed.

Another solution would be to piggyback EV chargers on streetlight poles. Los Angeles has already installed over 430 of them scattered throughout the city, and London has converted over 1,300 lampposts to add EV charging. Kansas City is trialing the setup, too, with plans to install 30–60 by the end of the year.

New York is the latest state to announce a sunset date for new fossil fuel vehicle sales. Last September, California Gov. Gavin Newsom (also a Democrat) issued an executive order directing the California Air Resources Board, better known as CARB, to develop regulations to mandate zero emissions for all new passenger cars and trucks by 2035. The order was issued under California’s unique authority under the Clean Air Act, which gives the Golden State the power to make laws and regulations stricter than the federal code. Massachusetts joined California last year in announcing a phaseout date of 2035.

Washington state attempted to pass a law earlier this year with a sunset date of 2030. The law made it through the legislature but was vetoed by Democratic Gov. Jay Inslee, who was concerned that the sunset date was tied to the implementation of a road-usage charge. The zero-emissions vehicle mandate, he said, was too important to be tied to other initiatives.

New York’s law makes it the first to be passed by a state legislature and signed by the governor. By going through the traditional legislative process, it may establish a template that other states can follow.