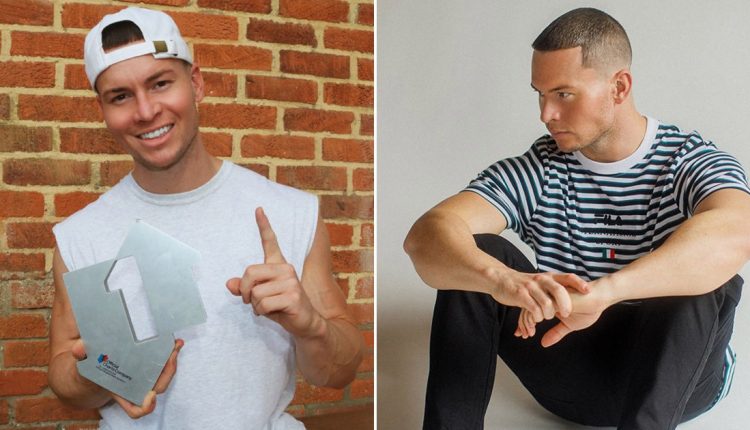 Chart king Joel Corry aims to be the next Calvin Harris — but he says you’ll never catch him splashing his cash on fast cars and Hollywood mansions like the Scottish superstar.

After brewing up No.1 hit Head & Heart with MNEK, the DJ celebrated by splashing his earnings on a coffee machine.

The 31-year-old, who has also scored top ten hits with Sorry and Lonely over the past 12 months, told Guilty Pleasures: ‘Calvin is a huge inspiration of mine. He is the God.

‘Someone like him is obviously a massive inspiration. Even if I had a little bit of the success that he has had in his career that would be amazing.’

As for what he’ll do with his own millions, former personal trainer Joel said: ‘I don’t like spending that much money.

‘I did get a coffee machine recently. It had that thing that frothed the milk up and everything. I went all-in on the coffee machine!’

The down-to-earth star added: ‘It’s not really in my nature to spend big money on stuff. I have never been like that. I save.’

He’s disciplined with the ladies too — as the offers are now flooding in, which he says he’s trying to ignore.

He previously dated Geordie Shore co-star Sophie Kasaei, but says of his new attention: ‘I don’t really notice those things, but obviously the DMs have been quite active… I am not going to lie!

‘There’s been a couple of funny ones. I haven’t really focused on that sort of thing, I’ve focused on getting the records right.’

And he says he doesn’t have time to date as he is too busy pinching himself.

‘The last 12 months have been the best of my life. It’s been life changing. Three in a row, it feels amazing,’ he said of his chart smashes.

‘There have been some magic moments. Last summer Idris Elba — a legend and a wicked DJ — dropped one of my tracks at a festival. There is a video of him playing to thousands of people. I’m like, “Oh my God, Luther!” because I love (Elba’s TV show) Luther.

‘Elton John also played my track on his radio show and gave me a shout out,’ gushed Joel, who hopes he’s on an unstoppable roll.

‘I have always been self-driven. I have this burning desire inside me. Sometimes I need to check myself. Calm down. It’s quite intense. I have tunnel vision. I want to get to the top. I am hungry for it. It’s not like work for me,’ he said.

It was two outfits in one day for Dua Lipa as she channelled her inner Amy Winehouse on the streets of the Big Apple.

The Mercury Prize nominee took the plunge in a revealing ’60s-inspired check and tomato print top, reminiscent of the late Back To Black singer’s iconic style.

Dua, who has ditched her blonde hair, then slipped into a black crop top as she explored New York with a friend for the rest of the day.

Her girlie catch-up came after she had spent lockdown with boyfriend Anwar Hadid, 21.

The loved-up pair recently escaped to the Caribbean before Dua opened up on the gamble she thought she was taking by releasing her No.1 album in the middle of a pandemic.

The 24-year-old, who will discover if her Future Nostalgia record has beaten the likes of Stormzy to the Mercury Prize in September, said: ‘I was really scared to put music out during this time.’

But after promoting it on Zoom calls and via social media, she said: ‘It’s been nice to connect with my fans and listeners in a different way.’

Hunky Paul is brickie-ing it over his next telly role

Normal People heartthrob Paul Mescal felt twitchy about playing a brickie on screen after his debut TV job made him a superstar.

The Irish actor stars as builder Sean McKeough in The Deceived, a four-part thriller by Derry Girls creator Lisa McGee and Tobias Beer.

The 24-year-old had two days off from BBC3 hit Normal People before starting work on the Channel 5 drama, and said: ‘Was I was nervous? Totally. I don’t have enough experience to feel comfortable stepping on to set but everyone was just so welcoming.’

Paul, recently seen in a Cork café with US singer Phoebe Bridgers, has reportedly signed up to celeb dating app Raya.

Whopper and prize! Taste of Tinie with burger team-up

Tinie Tempah has been flashing his buns at Burger King.

No, the fitness freak hasn’t been flexing his muscles… instead fans who buy a Whopper burger will get a QR code to download a 360˚ video of his new track Whoppa, which sees him perform inside a bun.

‘Of all the ways I’d be launching a single in 2020, I couldn’t have predicted it would be on top of a flame-grilled Whopper,’ the 31-year-old rapper said of his team-up over Twitter with the burger chain.

.The Real Life singer, 33, was taunted in the school playground after her family moved to Aberdeenshire from Sunderland.

The Brit winner, whose dad Joel is Zambian, told the Radio Times: ‘Two boys shouted “monkey” at me. I was upset and didn’t know what to do.

‘I remember my mum and dad sitting me down after they heard and saying, “Sadly, this is how the world works”.’

Cheap fizz did the biz for Spice Girls

The Spice Girls were cheap dates if the tipple that inspired No.1 hit Viva Forever is anything to go by.

Emma Bunton said they recorded it while slurping an £8.99 bottle of Asti Martini. Baby Spice, 44, joked the fizz is the one ‘you’ll find at the back of your drinks cabinet from a party you had ten years ago’.

The Heart FM DJ had a glass to celebrate the hit’s 22nd anniversary this week, and told fans: ‘Who needs Champagne and prosecco eh?’

Taylor Swift’s surprise new album Folklore is outselling the top five artists in the charts. The US singer, 30, is headed for a fifth UK No.1 record, despite not lifting a finger to promote it.

Twenty Twenty, the first solo album by Ronan Keating since 2012, is on track to be No.2.

If you’ve got a celebrity story, video or pictures get in touch with the Metro.co.uk entertainment team by emailing us [email protected] calling 020 3615 2145 or by visiting our Submit Stuff page – we’d love to hear from you.


MORE : Perrie Edwards gets frank about her future with Alex Oxlade-Chamberlain: ‘He is my forever’